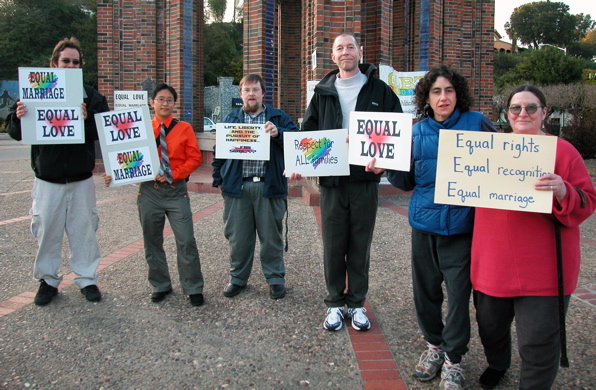 On March 15, 2005, The GLBT Alliance, a Santa Cruz queer political organization, held a rally at the Town Clock to celebrate a decision in San Francisco Superior Court that same-sex marriage could be legal in California. Superior Court Judge Richard Kramer ruled that sections 300 and 308.5 of family law codes violate equal protection, that the marriage statutes discriminate on the basis of gender and sexual orientation, and that they violate the fundamental right to marry.

The Campaign for California Families has already announced that the ruling will be appealed, but gay marriage advocates took some time to celebrate the first ruling by a California judge that discrimination in marriage is wrong.

3/14/2005: Richard Kramer, who is a judge in the San Francisco County Superior Court, ruled that it is unconstitutional for the state of California to limit the right to marriage to only a man and a woman. The National Center for Lesbian Rights filed this case last year on behalf of 12 same-sex couples, the Our Family Coalition, and Equality California. An appeal of the decision is likely. If the ruling is upheld, it would set California on a course to allowing marriage licenses to be granted to same-sex couples throughout the state. In February of 2004, San Francisco Mayor Gavin Newsom ordered SF City Hall to issue licenses to same-sex couples. "It appears that no rational purpose exists for limiting marriage in this state to opposite-sex partners," Kramer wrote.

The GLBT Alliance, Santa Cruz’ queer political organization, was created in the Spring of 2001 to fill the need for a progressive grassroots gay political group which would focus specifically on GLBT political issues where they diverge from the issues of the mainstream. In other words, while most of us, as individuals, work on nonqueer issues as well as on queer ones, the Alliance exists to ensure that the queer issues are not overlooked or assimilated into mainstream issues, and that a queer voice is present in all issues. 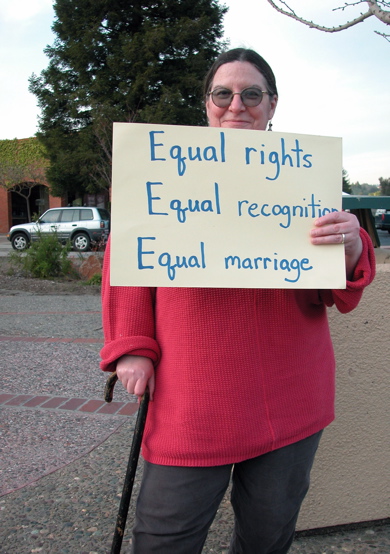