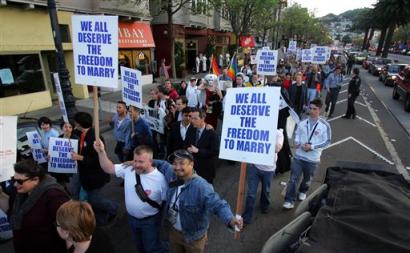 - By LISA LEFF, Associated Press Writer
Monday, March 14, 2005
(03-14) 12:11 PST San Francisco (AP) --
A judge ruled Monday that California can no longer justify limiting marriage to a man and a woman, a legal milestone that if upheld on appeal would pave the way for the nation's most populous state to follow Massachusetts in allowing same-sex couples to wed.

In an opinion that had been awaited because of San Francisco's historical role as a gay rights battleground, San Francisco County Superior Court Judge Richard Kramer said that withholding marriage licenses from gays and lesbians is unconstitutional.

"It appears that no rational purpose exists for limiting marriage in this state to opposite-sex partners," Kramer wrote.

§more
by more Monday Mar 14th, 2005 12:45 PM
A judge in California has ruled that the state's ban on gay marriage is unconstitutional.

San Francisco Superior Court Judge Richard Kramer said the state could no longer justify limiting marriage to a man and a woman.

The ruling came after litigation stemming from the city's decision last year to allow gays to marry.

Those marriages were ruled invalid by the state's Supreme Court but it then referred the issue to a lower court.

Superior Court Judge Richard Kramer's ruling is the first in the state to address the constitutionality of laws defining marriage as between a man and a woman. San Francisco, which conducted about 4,000 same-sex weddings last year, claimed the laws violated the rights of gays and lesbians.

Previous rulings in the case by the California Supreme Court dealt with whether San Francisco Mayor Gavin Newsom overstepped his authority by ordering city officials to perform the gay weddings.

Spirits ran high among same-sex couples after a San Francisco
judge ruled today that gay and lesbian couples cannot be denied
the right to marry, as city officials and legal teams vowed to
brace for what promises to be an arduous process of appeals
ahead.

"This is just the beginning,'' Mayor Gavin Newsom said at a City
Hall news conference, flanked by City Attorney Dennis Herrera
and some of the couples pursuing their marriage rights in court.

San Francisco Superior Court Judge Richard Kramer ruled that the
state constitution was violated by California laws limiting
marriage to a union between a man and a woman.

Kramer issued the ruling in a total of six lawsuits, four filed
by supporters of same-sex marriage and two filed by groups
opposed.

Some of the plaintiffs rejoiced after the ruling.

"It's a deep and wonderful thing for our community,'' said Diane
Sabin, who has spent more than 12 years in a relationship with
partner Jewelle Gomez.

Throughout the afternoon, couples sized up the upcoming appeals
process but kept the inevitable challenges to today's ruling
from putting a damper on their sentiments.

"I'll take every victory. We've been very dedicated and we
deserve the opportunity to marry,'' Sabin said. Her partner
stood by her side, smiling without wiping the tears from her
cheeks.

The mayor joined in the sense of triumph but said he would
remain focused on the certain courtroom battles ahead. Newsom
warned that judges were sure to offer differing opinions in
various parts of the country.

"There will be those that will be talking about tradition,''
Newsom said.

On Feb. 12, 2004, the mayor decided to allow gay nuptials, an
event that set off a flurry of City Hall activity that lasted
for a month as 4,049 same-sex couples came to tie the knot until
the state Supreme Court halted the weddings.

SAN FRANCISCO, Ca. -- A San Francisco judge on Monday ruled
against California’s ban on gay “marriage”, saying there is “no
rational purpose” to keeping marriage between a man and a woman
only. Meanwhile, the Christian legal defense group on the case
said they will vigorously work against the controversial ruling.

San Francisco County Superior Court Judge Richard Kramer said in
his opinion that “it appears that no rational purpose exists for
limiting marriage in this state to opposite sex partners.”

"The state's protracted denial of equal protection cannot be
justified simply because such constitutional violation has
become traditional," Kramer wrote in his decision.

At the crux of his ruling was his opinion that marriage is a
basic "human right" -- a characterization long disputed among
social conservatives and liberals.

Kramer wrote that the state's ban on same-sex "marriage"
violates "the basic human right to marry the person of one's
choice."

The ruling was made in light of a series of lawsuits brought by
the city of San Francisco and a dozen same-sex couple one year
ago, after the California Supreme Court halted the four-week
“marriage” spree that Mayor Gavin Newsom initiated in February
2004. Newsom and SF city officials handed out some 4,000 same-
sex “marriage” licenses” in defiance of state law before being
ordered to stop.

In August, the state's high court invalidated those "marriage"
licenses and ruled that Newsom had overstepped his authority in
giving the green light to such unions.

The several lawsuits filed against Mayor Newsom and by same-sex
marriage advocates were then consolidated before Judge Kramer,
who released his 27-page opinion today.

The recent ruling is not retroactive, and will not validate the
licenses issued in the past. However, if it is left to stand,
same-sex couples will be allowed to "marry" across the state.
Kramer’s decision essentially strikes down Proposition 22, a
statewide voter legislative initiative that was passed in 2004
with a 61.4 percent majority vote.

Liberty Counsel, a legal group specializing in issues pertinent
to the Christian community, defended the Campaign for California
Families (CCF) and its founder Randy Thomasson in the case.
Matthew D. Staver, president and general counsel of LC, said the
group plans to appeal the ruling at the higher court on behalf
of CCF.

“This ruling is not the end of the battle,” said Staver. “It is
just the beginning.”

Current California law defines marriage as a union between one
man and one woman only. However, the state does not yet have a
constitutional amendment protecting the traditional definition.
A pair of bills are pending before the state’s legislature, that
if passed would place a constitutional amendment on the November
ballot. Should California voters approve the amendment, as they
did the current marriage laws, the state will join thirteen
others in placing the issue out of the hands of “activist
judges” and in the hands of voters.

Staver, who called the ruling “ludicrous,” explained that
marriage protection amendments must be passed at state and
national levels in order to preserve marriage once and for all.

“Californians and the rest of the country will react to this
decision by passing constitutional amendments to preserve
marriage on the state and federal levels,” said Staver.

“Marriage should not be undermined by the stroke of a pen from a
single judge. Marriage is a fundamental policy issue that must
be decided by the people,” he added. “To rule that there is no
rational purpose to preserve marriage as the union of one man
and one woman is ludicrous.

“Marriage is and must remain the union of one man and one
woman.”

Copyright © 2005 The Christian Post.
Copyright © 2005 Christianpost.com
Add a Comment
§Judge faults California's gay-marriage ban
by People's Daily Online, China
Monday Mar 14th, 2005 8:11 PM
A judge ruled Monday that California's ban on gay marriage is unconstitutional ¡ª a legal milestone that, if upheld on appeal, would open the way for the most populous state to follow Massachusetts in allowing same-sex couples to wed.

Judge Richard Kramer of San Francisco County's trial-level Superior Court likened the ban to laws requiring racial segregation in schools, and said there appears to be "no rational purpose" for denying marriage to gay couples.

The ruling came in response to lawsuits filed by the city of San Francisco and a dozen gay couples a year ago after the California Supreme Court halted a four-week same-sex marriage spree started by Mayor Gavin Newsom.

The opinion had been eagerly awaited because of San Francisco's historical role as a gay rights battleground.

Gay marriage supporters hailed the ruling as a historic development akin to the 1948 state Supreme Court decision that made California the first state to legalize interracial marriage.

Conservative leaders expressed outrage at the ruling and vowed to appeal.

California has the highest percentage of same-sex partners in the nation, and its Legislature has gone further than any other in providing gay couples the benefits of marriage without being forced to do so by court order.

http://english.people.com.cn/200503/15/eng20050315_176911.html
Add a Comment
§equality for all... or equality for the assimilated?
by kenny-t
Friday Apr 1st, 2005 1:43 PM
so, it seems that the "right" to marriage that so many are fighting for in the queer community is rather antithetical to the historical gay movements wherein so many fought for recognition and distinction from our predominantly heteronormative society. in the past it wasn't about being like the heterosexuals but rather gathering visibility and acceptance in the eyes of the world. so why now is it that nearly all of the fire and fierceness of queer activism has moved away from defining ourselves as a distinct cultural group in exchange for heterocentric ideals based out of institutions that have historically persecuted and killed queers?
so, some have screamed at me, "IF YOU DON'T WANT TO GET MARRIED THEN DON'T GET MARRIED BUT WE HAVE A RIGHT!!"
this kind of statement is problematic, primarily because when we are pummeled with such ferocity by fellow queers, they almost invariably create a distinction between "we" (queers who want inclusion in the hetero institution of marriage with all the rights associated thereto) "[who] have a right [to get married]" and "we" (queers who don't want to be a part of an oppressive, racist, classist, sexist, misogynist, homophobic patriarchal system, yet want and deserve the same rights that married couples do).
this is not simply extended to homo-marriage, but also to hetero-marriage. marriage is a system used historically to channel monies between families through associations, very rarely did people marry out of love.
it is an oppressive romantic notion, that even if legalised for gays will still be discriminatory and exclusive of those heteros and queers that do not want to marry yet deserve the right to visit a terminally ill partner in the hospital or get the medical coverage that everyone should be entitled to.
so next time you're out on the streets touting the benefits of gay marriage, think about the innumerable disenfranchised queers and heteros alike that will still be excluded. or is it that once the "gay community" and her allys have succeded in inclusion that the struggle for true equality will dissolve before our eyes, as you ignore us from behind the pearly walls of matrimony.
Add a Comment
Support Independent Media
We are 100% volunteer and depend on your participation to sustain our efforts!