Pictures of Sit-In and Rally at Oakland Unified Headquarters 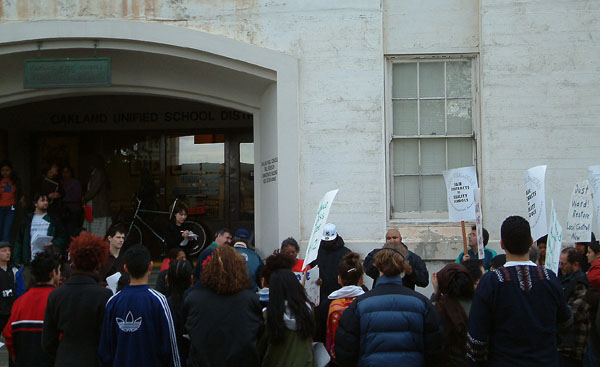 Oakland, CA. As of 3:45 p.m. today, Tuesday March 1st, six Oakland residents began a sit-in in the office of the state administrator of the Oakland schools when their demand for a meeting with State Superintendent of Public Instruction Jack
O'Connell was refused; about 75 students, parents, teachers and labor leaders rallied outside. The group demands a meeting with Superintendent O'Connell.

"We do not recognize the current district leadership as legitimate," says Kali Akuno, an Oakland-based educator who was part of the sit-in. "We call on Superintendent O'Connell to restore democratic
control to Oakland's public school system." As part of their action today, the coalition issued four demands for Superintendent O'Connell. They are:
1. The immediate restoration of local democratic control over the Oakland Unified School District;
2. No school closures and no charter conversions;
3. No layoffs; and
4. An immediate meeting with State Superintendent of Public Instruction Jack O'Connell to discuss the implementation of these demands.

Michael Siegel of the coalition, also sitting-in, continues: "Recent actions by State Administrator Randolph Ward to close schools without community input, to open our campuses to private school and charter school corporations, and to threaten the complete shutdown of our adult education program only further our resolve to resist this hostile takeover until Oakland parents, educators, and community members can once again decide how best to educate our children, youth, and adults." 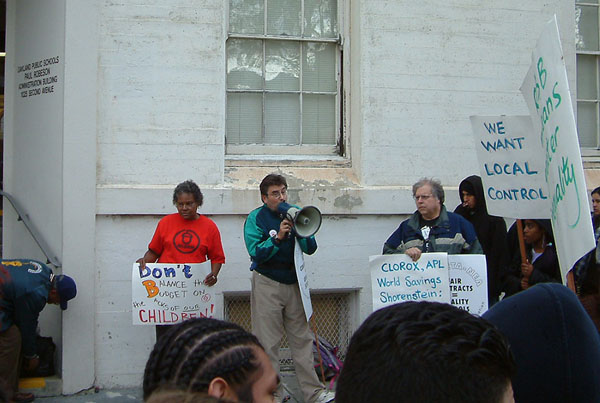 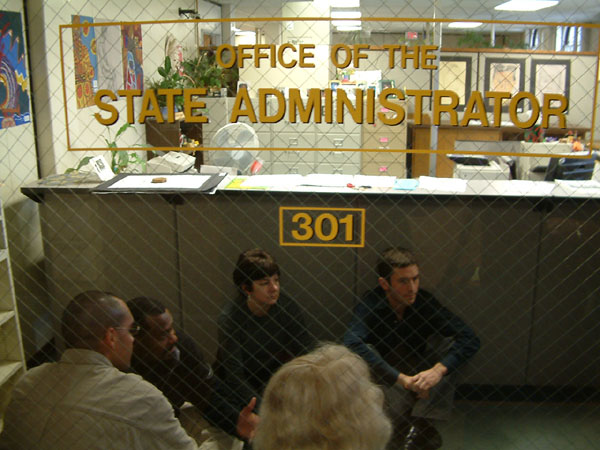 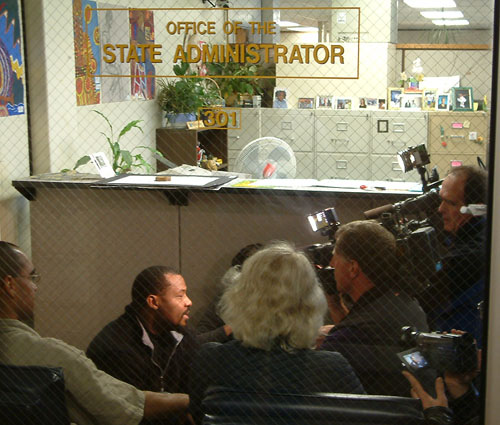 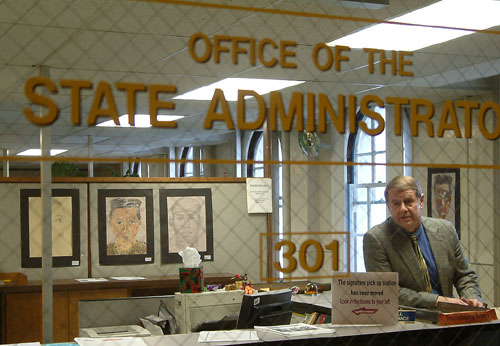 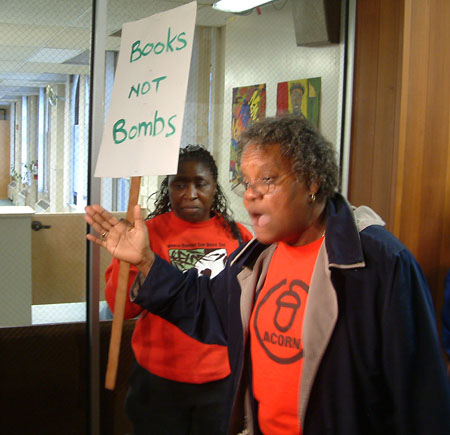 Unfortunately right as some of the youth were going to go up to offer their support, the Oakland Police began to clamp down on the building and stop people from going inside.
END_OF_DOCUMENT_TOKEN_TO_BE_REPLACED
§Second in Charge of Oakland Unified orders OPD to shut the doors and make everyone leave
by upton sinclair 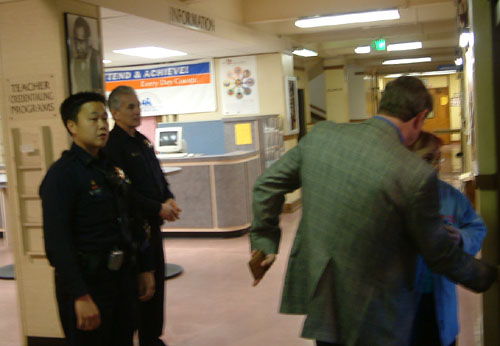 They even kicked out credentialed reporters in their overzealousness to contain the situation, though Oakland Police later backtracked on this stance and escorted the media members back inside during the arrests.
END_OF_DOCUMENT_TOKEN_TO_BE_REPLACED
§Oakland Youth making noise at the Rally in front of Oakland Unified
by upton sinclair 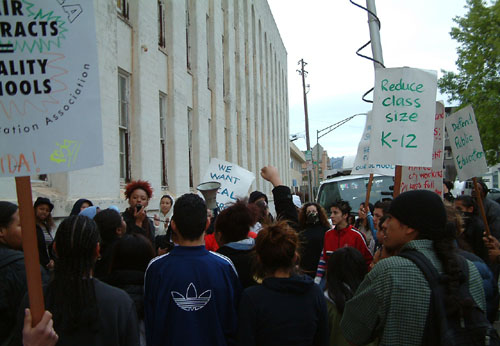 Chanting - "1, 2, 4, 3, Ward Doesn't Give a Damn About Me" and various other chants loud enough for people to hear up in the administrators office 3 flights up.
END_OF_DOCUMENT_TOKEN_TO_BE_REPLACED
§An Injury to One, Is An Injury to All
by upton sinclair 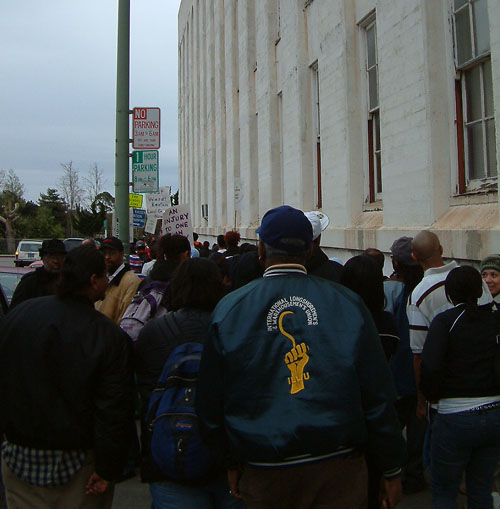 Community members and Oakland youth march around the building to the back parking lot where Oakland Police will be taking the people from inside the office after they arrest them.
END_OF_DOCUMENT_TOKEN_TO_BE_REPLACED
§A line of Oakland Unified Security officers blocking off the parking lot
by upton sinclair

With youth and community members rallying right in front of them and talking to them about how changes in Oakland Unified may begin to affect them.
END_OF_DOCUMENT_TOKEN_TO_BE_REPLACED
§Another pic of the Rally behind the OUSD Admin. building
by upton sinclair 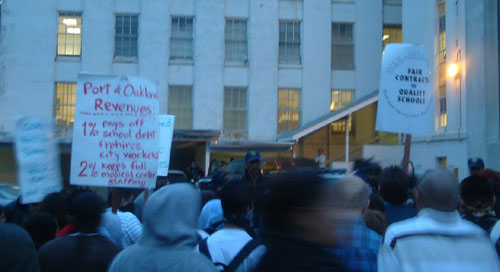 END_OF_DOCUMENT_TOKEN_TO_BE_REPLACED
§Folks get in a circle to do a Solidarity Clap and chant &quot;We'll be back&quot;
by upton sinclair 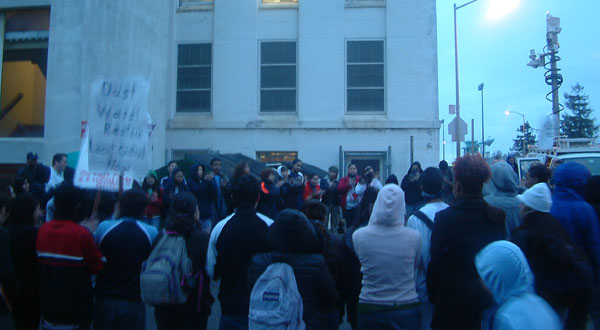 A lot of folks were going to a basketball game nearby and expressing their support for the rally as they went by.
END_OF_DOCUMENT_TOKEN_TO_BE_REPLACED
Add Your Comments
Latest Comments
Listed below are the latest comments about this post.
These comments are submitted anonymously by website visitors.
TITLE
AUTHOR
DATE
passive consumer
fil oaks
Invitation to Phil and Others: ORGANIZE!
jz
all right then
amo
question
black cross
Gotta start somewhere
amo
reality check
fil oaks
Hey Phil
Thanks
correction
phil
then get significant numbers of folks out there!
phil oaks
Good job
thanks
Support Independent Media
We are 100% volunteer and depend on your participation to sustain our efforts!