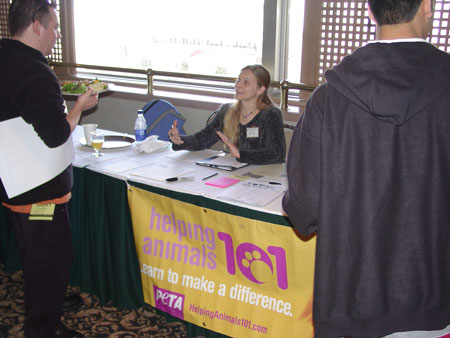 
Awesome packet provided with resource materials also available, many for for free, from PETA's website at http://www.peta.org:
PETA's Animal Times magazine; Vegetarian Starter Kit and "Chew on This" DVD with compelling reasons to go vegetarian; booklet on living cruelty-free; briefs on legislation, handling the media, organizing demos; even a few pages of recipes, and more

1. Animal Rights 101 by Dan, with IDA PSAs (In Defense of Animals from Marin - http://www.idausa.org)
- animals not being ours to eat, wear, experiment on, or use for entertainment
- read AR "Bible", Animal Liberation, for lengthy discussion of ethics of human use of animals (http://akpress.org/2000/items/animalliberationsinger)

2. Friends for Life: Animal Companions by Laura
Everyday Things You Can Do:
- pay/donate to spay and neuter cats and dogs
- volunteer at local shelters, check on their standards, as it's easier to prompt change from the inside. some have attrocious standards such as shooting dogs and/or gassing animals en masse piled into dumpsters (PETA has documented many abuses with undercover videos)
[see problems even in the Bay Area at http://www.indybay.org/archives/archive_by_id.php?id=2882&category_id=58]
- be prepared in case you run into an injured animal. carry a "rescue kit" with, amongst other things, water bowl, leash, and #s of lcal shelters
- with record of numerous abuses companywide, PetCo boycott until they stop selling animals
- be watchful at all pet stores for abuses and sick animals

3. Veganism in a Nutshell by Bruce
- taking any food causes harm to earth, but with all of the additional environmental harm that comes from meat-based diet (like throwing away many plates of food for every one you eat), no true environmentalist eats meat or dairy.
- US has one of highest intakes of milk and amongst highest rates of osteoperosis (animal protein leaches calcium from bones)
- if you drink milk, you are contributing to veal industry as the two are intertwined
- pus allowable and found in most milk in US today

4. Vegetarianism in the Kitchen by Alka and Alex
- suggested buying just 2 or 3 cookbooks, one being quick and easy-type recipes
- cooking veggie much easier now than even 10-15 years ago with all of the products stocked in mainstream grocery stores all over the country, not just health food stores anymore, as well as abundance of whole foods everywhere for vegetarians
- recommended resources: http://www.goveg.com, http://www.vegieworld.com, http://www.veganstore.com, and http://www.vegcooking.com

5. Animals in Entertainment by William
- William started the "Running of the Nudes" in Spain to bring attention to the the cruel uses of bulls in Spain and to offer fun alternative
- elephants need much space to walk or develop problems with feet
- undercover video shown of Ringling Bros head elephant trainer, son of
- many businesses have stopped suporting animal circuses in last 10 years
- see http://www.circuses.com and http://www.wildlifepimps.com

8. Vivesection by Alka
- total numbers currently unknowable as mice/rat numbers used unreported and they are the clear majority of animals used
- Descartes performed public vivestions in what he claimed was education
- product testing one of main uses of animals yet not required by law: cosmetics, companion animal food (IAMS boycott ongoing, http://www.iamscruelty.com)
- charities and taxpayers pay for much of it. avoid charities that sponsor animal testing.
- numerous vivesectors have been reprimanded by peers for pointless and cruel experiments after PETA and other undercover investigations. Columbia University vivesector lost his job.
- http://www.stopanimaltests.com
- some companies like pharmagene (http://www.pharmagene.com) pioneering non-animal testing methods and ask, "Why go back to animals?"

9. Answering Tough Questions by Bruce and Alka
- review of most commonly asked questions by non-vegetarians, both friendly and hostile, and how to respond in a way that invites further discussion rather than defensively attacking questioner (example: Question: doesn't broccoli feel pain? Answer: broccoli lacks a central nervous system)
- get discussions going at demos, with t-shirts and stickers, etc. be calm and unafraid 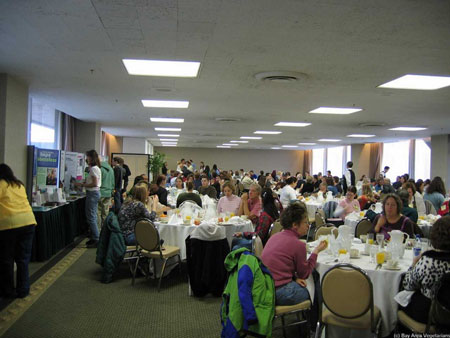 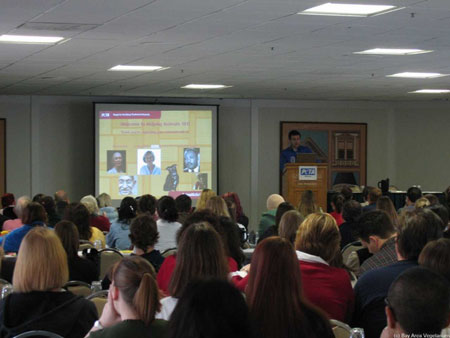 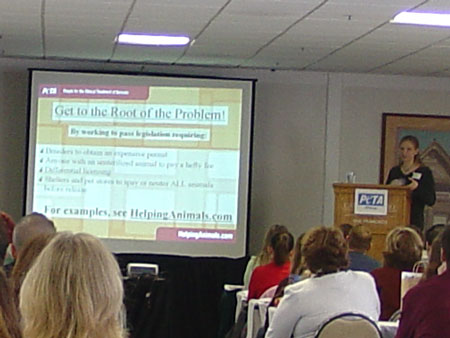 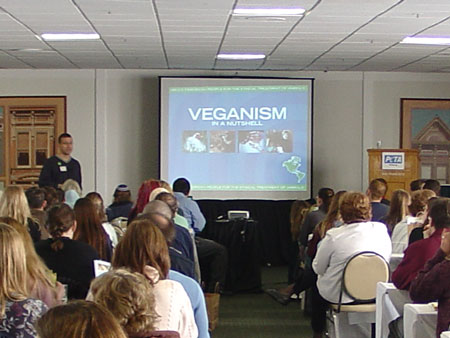 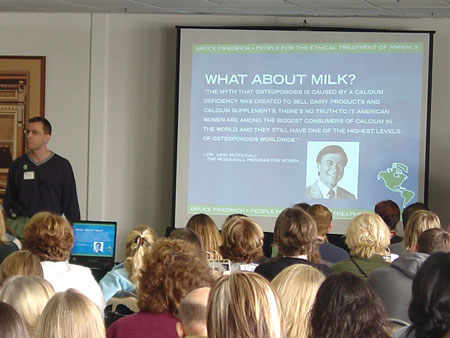 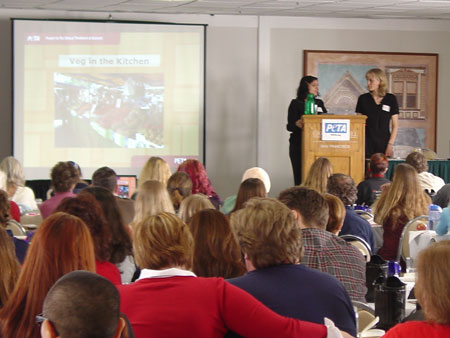 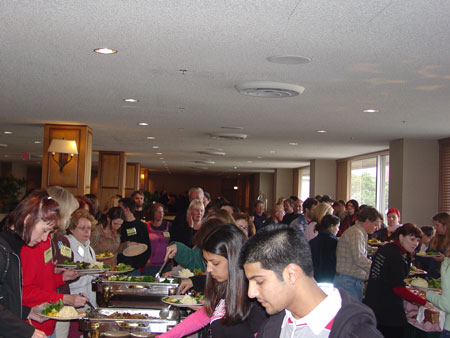 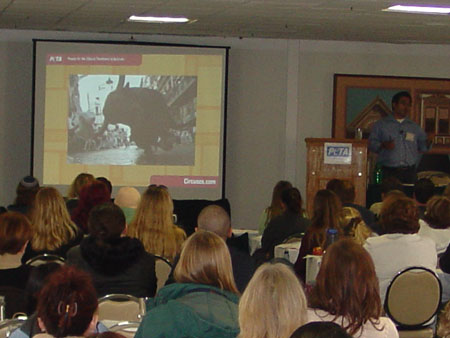 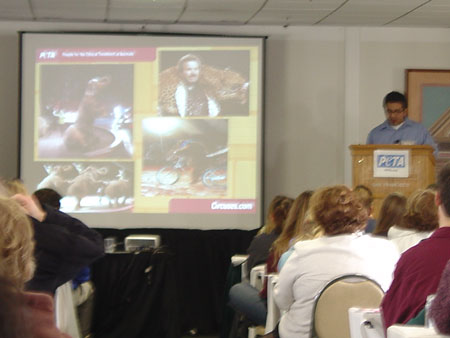 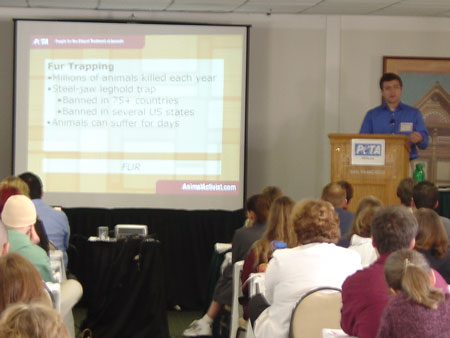 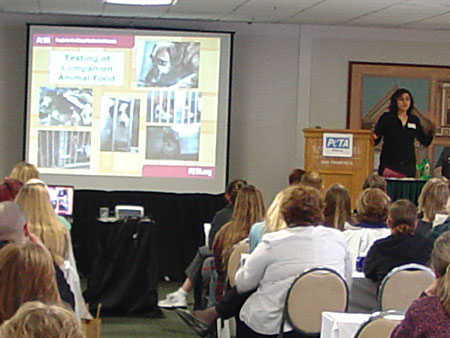 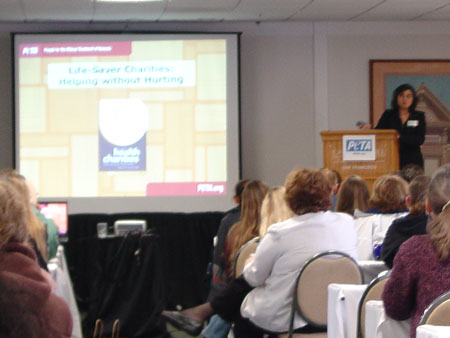 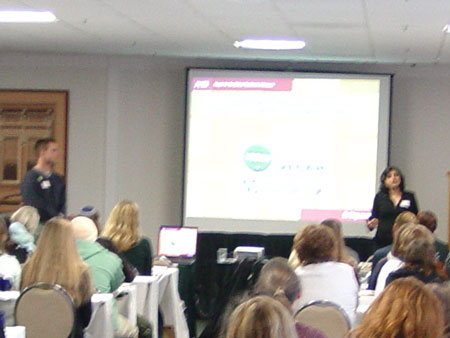 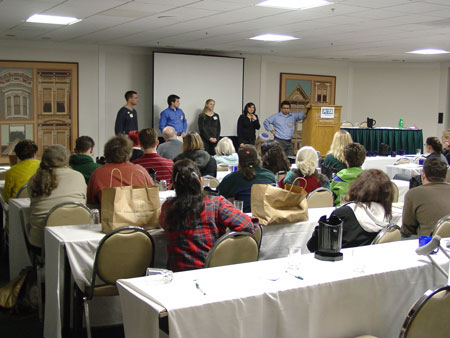 http://www.helpinganimals101.com/
Add Your Comments
Support Independent Media
We are 100% volunteer and depend on your participation to sustain our efforts!