The Kurds want Kirkuk to be added to the three autonomous provinces of Iraqi Kurdistan. Thousands of Kurds displaced from the city by the former regime were allowed to return to vote on January 30.

Kurds celebrated the results in style, driving through northern Kirkuk with Kurdistani flags flying, shooting in the air and blaring their horns.

The Turkmen minority represented by the Turkmen Front came in second place with 16 percent of the vote, or 73,791 ballots.

Several Arab and Turkmen organisations denounced alleged irregularities in the historic January 30 vote even before final results were announced.

Sunni Arab and Shiite parties withdrew from the vote in Tamim to protest against displaced Kurds being allowed to return to vote. 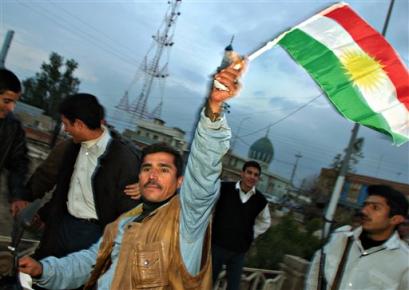 An unidentified Kurdish supporter waves a Kurdish flag as he runs through the streets despite a curfew, celebrating a strong electoral result for the Kurds, in Kirkuk, in the northern Kurdish area of IraqSunday, Feb. 13, 2005, after results for the Iraqi general election were announced. Iraq's majority Shiite Muslims won nearly half the votes in the nation's landmark Jan. 30 election, but will have to form a coalition in the 275-member National Assembly with the other top vote-getter - the Kurds and Prime Minister Ayad Allawi's list. (AP Photo/Sasa Kralj)
----
14 February 2005

Hundreds of Kurds flooded on to the streets in the northern city of Kirkuk yesterday firing weapons in the air and honking horns after the powerful Kurdish alliance came second in the Iraqi elections, winning 25 per cent of the vote nationwide.

Kurdish leaders will enter negotiations with the Shia coalition, which took nearly half the votes but lacks the two-thirds majority necessary to appoint leaders and pass legislation. Despite the strong showing and groundswell of support for greater autonomy in the Kurdish north the message from the newly elected leaders was more conciliatory. "Iraq is a mosaic," said a Kurdistan Democratic Party spokesman, Faraj al-Haidary. "It is a combination of all parts - not as an alliance with one party."

The two major Kurdish political parties, the Patriotic Union of Kurdistan and the Kurdistan Democratic Party, ran on the same ticket in the national elections and have agreed to put up the PUK leader Jalal Talabani as their candidate for president, a nomination that seems likely to win the support of the Shia bloc.

"We will reach out to everyone, even the Sunnis who didn't vote, and remind the Shias not to do what happened in 1920, when some groups were forgotten about," Mr Haidary said, referring to the 1920 revolution, which, though led by Shias, marked the beginning of their disenfranchisement as British proxy rule came to rely on the Sunni minority.

But there is the potential of the Kurds alienating disenfranchised Sunni rebels simply by assuming what many see as their rightful position. If Mr Talabani does become president, "it is difficult for the Sunnis to lose the presidency and the premiership at the same time", said Womidh Nadhmi, the former chairman of Baghdad University's political science department. "It is difficult to compensate them."

Mr Nadhmi said Mr Talabani had acted intelligently so far in dealing with the insurgency, urging restraint before the US assault of Fallujah in November which levelled the city.

Some groups have raised concerns about the possibility of Kurdish secession, but a local pollster, Saadun al-Dulaimie, said a poll he conducted in the Kurdish region found 65 per cent wanted the three Kurdish provinces to remain a part of Iraq and only 32 per cent wanted independence.

Mr Dulaimie said that, if anything, it would be the Arabs that drove away the Kurds. "Eighty per cent of the Kurds said they preferred a democratic state," he said, citing a countrywide poll he conducted last year. "In the rest of Iraq, only 58 per cent of the people said they wanted democracy."

Kurdish success sounded alarm bells in Turkey. Ankara fears Kurdish domination of the oil-rich city of Kirkuk as it could potentially make a Kurdish state in northern Iraq viable. This could further inspire Turkey's own rebellious Kurds, who have been fighting government forces in southeastern Turkey since 1984. Turkey has long complained that Kurdish groups were illegally moving Kurds into Kirkuk in an effort to tip the city's population balance in their favour.

http://news.independent.co.uk/world/middle_east/story.jsp?story=610872
Add a Comment
Support Independent Media
We are 100% volunteer and depend on your participation to sustain our efforts!