Newswire
Calendar
Features
Home
Donate
From the Open-Publishing Calendar
From the Open-Publishing Newswire
Indybay Feature
Publish to Newswire
Add an Event
Related Categories: Iraq | International
Shia list wins most votes in Iraq polls
by ALJ
Sunday Feb 13th, 2005 10:25 AM
An alliance of Shia groups won the most votes in Iraq's 30 January election, but the percentage it received - 47.6% - was lower than many expected, according to the final vote tally released on Sunday.
The Shia list is expected to take 132 seats in the new 275-member National Assembly, according to election commission results.

A coalition of the two main Kurdish parties won 25.4% and a bloc led by interim Prime Minister Iyad Allawi got 13.6%.

Turnout in last month's election was about 59%, with a total of 8,456,266 people voting, election commission officials said.

Only 2% of eligible Iraqis in the Sunni Arab-dominated Anbar province voted in the elections, and only 29% in the mainly Sunni Salahadin province, the final tally showed.

The low turnout in Sunni provinces showed that many Sunni Arabs boycotted the election or stayed away out of fear, potentially worsening sectarian tension in Iraq.

The vote determines the composition of a 275-member National Assembly that must agree on a president and two vice-presidents by a two-thirds majority.

Those three officials will then agree on a prime minister and cabinet, and their choices must be approved by a majority in the assembly.

With no bloc gaining dominance on its own, there has already been furious horse-trading to try to strike deals.

The Kurds want their candidate, Jalal Talabani, to be president or prime minister.

Under one scenario, the two blocs could do a deal with a Shia candidate getting the prime minister's job and Talabani the presidency.

But Allawi, who visited Iraqi Kurdistan on Saturday and met Talabani, may also try to form alliances to improve his chances. If he can make a deal with the Kurds and persuade some of the Shia alliance to break away, he may be able to keep his job.

Even if Sunni Arabs are largely shut out of government, they could still potentially veto the new Iraqi constitution due to be written this year, causing political deadlock.

One of the main tasks of the National Assembly is to oversee the drafting of a constitution which must be approved by a referendum.

Iraq has announced it will close its land borders from Thursday to try to prevent a flood of foreign pilgrims arriving for Ashura, one of the holiest events in the Shia calendar, when millions of people converge on shrines in Iraq.

A car bomb exploded near an Iraqi security forces checkpoint on the road between Hilla and Karbala in a mainly Shia area south of Baghdad on Sunday, killing at least one person.

Human bombers attacked pilgrims in Baghdad and Karbala last year, killing 171 people, and Ashura could be a flashpoint again this year, especially if the poll results fuel tension.

The bodies of two men who worked with Allawi's party were found in a rebellious district of Baghdad on Sunday, police said.

In the northwest of the capital, fighters assassinated two senior Iraqi army officers and their driver. Al-Qaida network in Iraq claimed responsibility for the attack. In the town of Baquba, northeast of Baghdad, assailants shot dead a Communist party member who was also a local councillor.

On Saturday, a suicide car bomb killed 18 people in Musayyib, a mixed Sunni and Shia town south of Baghdad.

The previous day, a suicide car bomb killed 13 people near a Shia mosque in Balad Ruz, northeast of Baghdad, and fighters attacked a Shia bakery in the capital, killing nine.

Al-Qaida's wing in Iraq, led by Jordanian militant Abu Musab al-Zarqawi, claimed responsibility for the Balad Ruz attack but said its target was a nearby Iraqi army patrol, not the mosque.

Zarqawi's group has previously issued statements denouncing the elections and condemning Iraqis for taking part in them.

Earlier on Sunday, Jawad Taqi, the official in charge of political relations in the Supreme Council of Islamic Revolution in Iraq (SCIRI), told Aljazeera that SCIRI and the other major constituents of the UIA believe all Iraqi political forces should participate in forming the Iraqi government and drawing up the new constitution.

"Intensive talks are being held with all Iraqi sides that have participated and boycotted the elections in order to reach a specific vision of the formation of the new Iraqi government," Taqi said.

"The Iraqi national society will include many different forces, including Kurdish parties and Allawi's party."
Aljazeera + Agencies

Of Iraq's 14 million eligible voters,8 ,456, 266cast ballots, the commission said, according to The AP. That represents a turnout of less than 60percent.

About1 . 75million votes were cast in the Kurdish-ruled areas of northern Iraq. Iraqis living in those areas also elected a new regional parliament.

The results released Sunday will not be certified for three days, officials said. "This is a new birth for Iraq," commission spokesman Farid Ayar said.

THE IRAQI LIST: 233 candidates, led by interim Prime Minister Ayad Allawi. Includes a mix of Shiites and Sunnis, but Shiites account for the majority of top names. Considered more secular than the United Iraqi Alliance, it was third in candidate lists, winning about 1.168 million votes, or 13.8 percent of the total.

IRAQIS PARTY: Party's 80 candidates, led by interim President Ghazi al-Yawer, were overwhelmed in the election -- they only won about 150,000 votes, or less than 2 percent. Mix of Sunnis and Shiites, and favored by some Sunnis who agreed with al-Yawer's opposition to U.S. attacks aimed at wiping out insurgents in the hotbed cities of Fallujah and Mosul.

ASSEMBLY OF INDEPENDENT DEMOCRATS: List of 78 candidates led by Sunni elder statesmen, Adnan Pachachi, took only 12,000 votes, or 0.1 percent. Had been expected to fare well among intellectuals and the urban middle class.

Kurdish Alliance of the Patriotic Union of Kurdistan and the Kurdistan Democratic Party: 71 seats
*

Movement of Reconciliation and Liberation of Sunni Mishaan al-Juburi:1

http://www.islamonline.org/English/News/2005-02/13/article07a.SHTML
Add a Comment
§more detailed results
by more detailed results
Sunday Feb 13th, 2005 3:00 PM
BAGHDAD, Iraq (AP) - Here is a list of the political alliances receiving the most votes in Iraq's Jan. 30 national elections and the number of seats they will receive in the 275-member National Assembly, provided the results released Sunday are certified.

The Islamic Labor Movement in Iraq: 43,205 for two seats.

The National Democratic Alliance: 36,795 for one seat.

The Reconciliation and Liberation Entity: 30,796 for one seat. 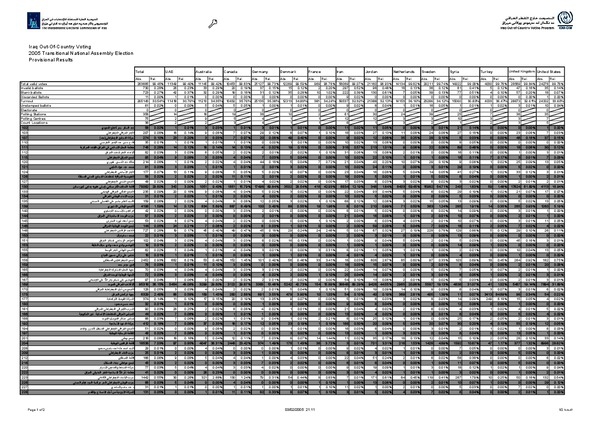 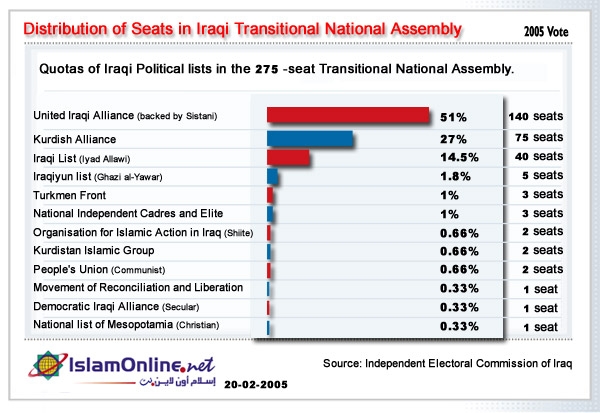