The National Executive Committee of the NLG calls on all Guild chapters to organize and to take part in local actions as part of a "National Day of Outrage" in response to yesterday's Lynne Stewart verdict, which we see as an attack not only on our cherished colleague and fellow NLG member but also on all members of the legal community who represent unpopular clients and causes. We are calling for this coordinated day of action to be held next Thursday, February 17 in your cities, towns, and, if you are a law student, at your school. We are putting together a list of suggested actions to take and will send this out ASAP. Please begin making arrangements and stay tuned for more information.

This will be just one step in our ongoing support for Lynne Stewart and in defense of all of those who take on controversial cases. 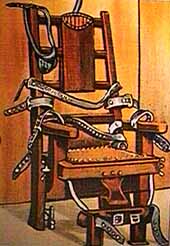 supporting terrorisom has it's down side
Add a Comment
§That's right, Bush ought to be in the chair
by repost
Wednesday Feb 16th, 2005 11:39 AM
Bush & Cheney are the real 'terrorists.'
Add a Comment
§I am very outraged
by Chaim Ben Pesach
Wednesday Feb 16th, 2005 12:40 PM
American Communist lawyer Lynne Stewart was convicted last week by a federal jury in New York of aiding anti-American Islamic terrorist mass murderers.

Stewart was the attorney for Egyptian Muslim Nazi Sheik Omar Abdel Rahman, who is serving a federal prison term of life without parole for being the leader of the Al Qaeda gang who assassinated Rabbi Meir Kahane in 1990 and who bombed the World Trade Center for the first time in 1993.

While visiting her client Rahman in a cozy prison hospital in Rochester, Minnesota, Stewart agreed to transmit Rahman's murderous instructions to his fellow Islamic terrorists in Egypt. And indeed as soon as she left the federal prison hospital, Stewart called a Reuters reporter in Egypt to tell him to report on his news wire that Rahman was urging his followers to resume their terrorist attacks against non-Muslim "infidels."

The jury in the Stewart case heard tapes and saw video of Stewart receiving her terrorist instructions from Rahman in the prison hospital visiting room.

Stewart had two Islamic terrorist codefendants in the case: Ahmed Abdel Sattar plotted to "kill Jews and their supporters" through Muslim terrorist attacks abroad; and Mohamed Yousry was the Arabic translator whom Stewart used to get her terrorist instructions from Rahman, who does not speak English.

All three defendants in the case - Stewart, Sattar and Yousry - were convicted on all counts in the indictments that were presented to the jury.

Sattar faces a possible sentence of life imprisonment without parole, while Stewart and Yousry each face up to 45 years in prison.

What is most astonishing and grotesque about this case is how the Muslim-loving U.S. news media is so sympathetic to Stewart - a Communist traitor lawyer who plotted with Rahman to commit Islamic terrorist mass murder.

The February 10, 2005 story in the anti-American New York Nazi Times was headlined, "Civil Rights Lawyer Is Convicted of Aiding Terrorists".

How can a monster like Stewart - who assists Islamic terrorists in their quest to deny Christians, Jews and all non-Muslims their right to live - be defined as a "civil rights" lawyer?

In 1993, Rahman ordered Al Qaeda to bomb the World Trade Center. As a result of the bombing, six innocent Americans were murdered.

The FBI proved at Rahman's trial that Al Qaeda's goal was to destroy the Twin Towers by causing them to collapse onto the surrounding streets. Rahman and his fellow Muslim terrorists thought they could murder 250,000 Americans in downtown Manhattan by causing the World Trade Center to collapse on the extremely crowded streets below. Because their bomb was not powerful enough to cause the collapse of the buildings, they failed in their Islamic dream of slaughtering hundreds of thousands of innocent American men, women and children - whose only "crime" is that they are not Muslims.

Aiding Satanic Islamic Nazi beasts like Rahman is what the Muslim-loving news media defines as "civil rights" work.
And it is not just the notoriously pro-Muslim, pro-Arab and anti-American New York Nazi Times that supports Communist traitors like Stewart.

The viciously anti-American Associated Press (AP) - which is the main newswire for U.S. television and radio stations and for U.S. newspapers - also defined Stewart as a "veteran civil rights lawyer."

The AP is half-owned by Arab Muslim Nazi oil sheiks in the Persian Gulf who finance and sponsor anti-American Islamic terrorism.

This is the primary source of newswire "information" for U.S. television, radio and newspapers.

No wonder America is so quickly self-destructing.

The AP story sought to get reaction to the Stewart conviction from "objective" attorneys.

The first "objective" attorney interviewed in the AP story was Ron Kuby, who is also an avowed Communist.
Kuby enthusiastically represented Sheik Rahman after his arrest in the 1993 World Trade Center bombing.
"It's a dark day for civil liberties and for civil liberties lawyers in this country," Kuby told the AP in reaction to the Stewart conviction.

As if there would be any "civil liberties" in this country if Stewart, Kuby and their Muslim terrorist ally Rahman had their way.

To show how sick and evil our society has become, for the past several years Kuby has co-hosted a morning radio talk show on WABC, the number-one talk radio station in America.
The "conservative" station WABC - which is the flagship station for "conservative" talk show hosts Rush Limbaugh and Sean Hannity - pays Kuby a huge salary to co-host a talk show four hours every day, five days a week.
Kuby's "conservative" co-host is the Jew-hating fraud Curtis Sliwa.

On the show, Kuby and Sliwa are the best of friends. Indeed, Hannity is also very friendly to Kuby on the air.
Why not invite Osama Bin Laden to co-host a radio program? Sliwa and Hannity would also be friendly with their co-host Osama despite their differences of opinion on certain issues.
The same Sean Hannity who is buddies with Sheik Rahman's enthusiastic attorney Ron Kuby will not allow Chaim Ben Pesach to be even a one-time guest on his show.
Why? Because Chaim Ben Pesach is too controversial. But Muslim terrorist-supporting Ron Kuby is not.

In your heart, you know we're right. And in your guts, you know they're nuts.

Only if JTF gets the support it needs can we finally turn the tide to save America.

Every generous check or money order (which can be anonymous) made out to "JTF" (which is political and not tax-exempt) or to "VJA" (which is fully tax-exempt and non-political) makes a huge difference. You can also send cash donations if you wish.

Do not depend on others to do your part! G-d only blesses those who do their own part!

May G-d bless all of our loyal supporters and their loved ones.