Add an Event
Newswire
Calendar
Features
Home
Donate
From the Open-Publishing Calendar
From the Open-Publishing Newswire
Indybay Feature
Publish to Newswire
Add an Event
Related Categories: Central Valley | Police State & Prisons
For Andres Raya... ...And For All of Us
by socialwar info (info [at] socialwar.net)
Tuesday Feb 1st, 2005 10:12 PM
On January 9, 2005, outside a Ceres, CA liquor store, Andres Raya ambushed the police. Raya had earlier fired into the air, hid his assault rifle, and rushed into the store requesting police assistance. Raya shot and killed arriving Ceres police Sgt. Howard Stevenson, and seriously wounded officer Sam Ryno. Raya then fled. He died later following a cop stakeout and another confrontation, where he was shot eighteen times. 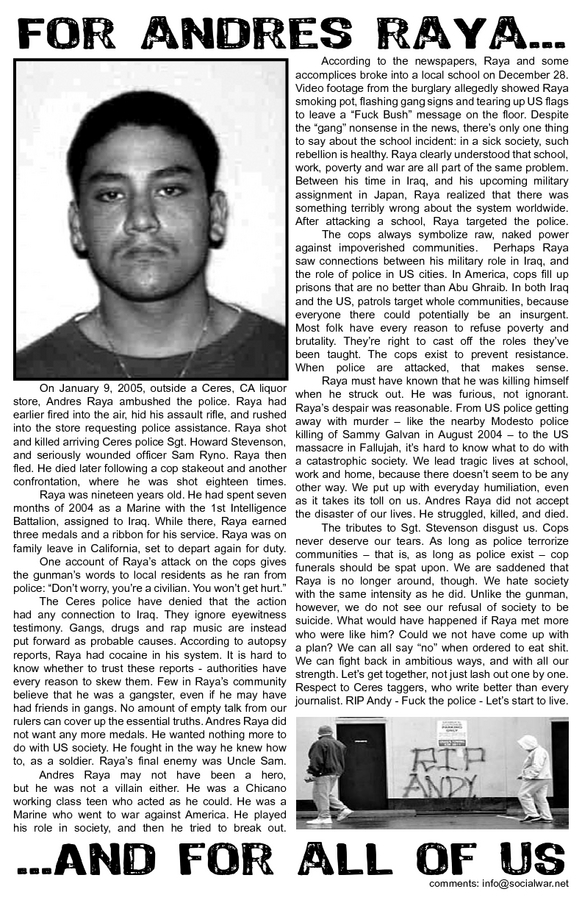 On January 9, 2005, outside a Ceres, CA liquor store, Andres Raya ambushed the police. Raya had earlier fired into the air, hid his assault rifle, and rushed into the store requesting police assistance. Raya shot and killed arriving Ceres police Sgt. Howard Stevenson, and seriously wounded officer Sam Ryno. Raya then fled. He died later following a cop stakeout and another confrontation, where he was shot eighteen times.

Raya was nineteen years old. He had spent seven months of 2004 as a Marine with the 1st Intelligence Battalion, assigned to Iraq. While there, Raya earned three medals and a ribbon for his service. Raya was on family leave in California, set to depart again for duty.

One account of Raya’s attack on the cops gives the gunman’s words to local residents as he ran from police: “Don’t worry, you’re a civilian. You won’t get hurt.”

The Ceres police have denied that the action had any connection to Iraq. They ignore eyewitness testimony. Gangs, drugs and rap music are instead put forward as probable causes. According to autopsy reports, Raya had cocaine in his system. It is hard to know whether to trust these reports - authorities have every reason to skew them. Few in Raya’s community believe that he was a gangster, even if he may have had friends in gangs. No amount of empty talk from our rulers can cover up the essential truths. Andres Raya did not want any more medals. He wanted nothing more to do with US society. He fought in the way he knew how to, as a soldier. Raya’s final enemy was Uncle Sam.

Andres Raya may not have been a hero, but he was not a villain either. He was a Chicano working class teen who acted as he could. He was a Marine who went to war against America. He played his role in society, and then he tried to break out.

According to the newspapers, Raya and some accomplices broke into a local school on December 28. Video footage from the burglary allegedly showed Raya smoking pot, flashing gang signs and tearing up US flags to leave a “Fuck Bush” message on the floor. Despite the “gang” nonsense in the news, there’s only one thing to say about the school incident: in a sick society, such rebellion is healthy. Raya clearly understood that school, work, poverty and war are all part of the same problem. Between his time in Iraq, and his upcoming military assignment in Japan, Raya realized that there was something terribly wrong about the system worldwide. After attacking a school, Raya targeted the police.

The cops always symbolize raw, naked power against impoverished communities. Perhaps Raya saw connections between his military role in Iraq, and the role of police in US cities. In America, cops fill up prisons that are no better than Abu Ghraib. In both Iraq and the US, patrols target whole communities, because everyone there could potentially be an insurgent. Most folk have every reason to refuse poverty and brutality. They’re right to cast off the roles they’ve been taught. The cops exist to prevent resistance. When police are attacked, that makes sense.

Raya must have known that he was killing himself when he struck out. He was furious, not ignorant. Raya’s despair was reasonable. From US police getting away with murder – like the nearby Modesto police killing of Sammy Galvan in August 2004 – to the US massacre in Fallujah, it’s hard to know what to do with a catastrophic society. We lead tragic lives at school, work and home, because there doesn’t seem to be any other way. We put up with everyday humiliation, even as it takes its toll on us. Andres Raya did not accept the disaster of our lives. He struggled, killed, and died.

The tributes to Sgt. Stevenson disgust us. Cops never deserve our tears. As long as police terrorize communities – that is, as long as police exist – cop funerals should be spat upon. We are saddened that Raya is no longer around, though. We hate society with the same intensity as he did. Unlike the gunman, however, we do not see our refusal of society to be suicide. What would have happened if Raya met more who were like him? Could we not have come up with a plan? We can all say “no” when ordered to eat shit. We can fight back in ambitious ways, and with all our strength. Let’s get together, not just lash out one by one. Respect to Ceres taggers, who write better than every journalist. RIP Andy - Fuck the police - Let’s start to live.