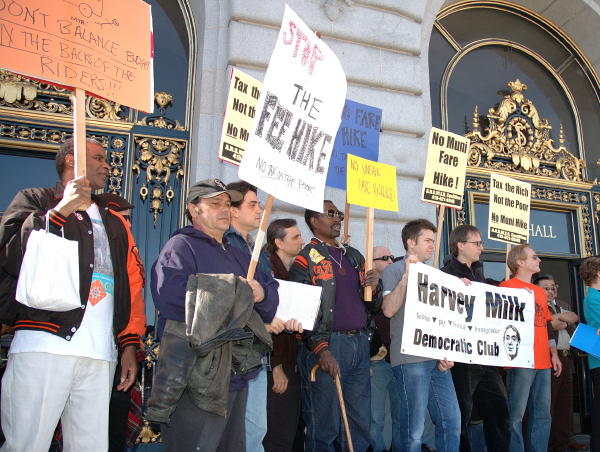 A rally ,called by the Coalition For Transit Justice, was held Monday, 1/31/2005 on the steps of San Francisco City Hall to protest the proposed Muni fare hike. The current fare of $1.25 would be raised to $1.50, placing more of the burden on the poor working class of this city. Speakers from community organizations and members of the Board of Supervisors spoke out against the fare hike.

All photos by Bernie 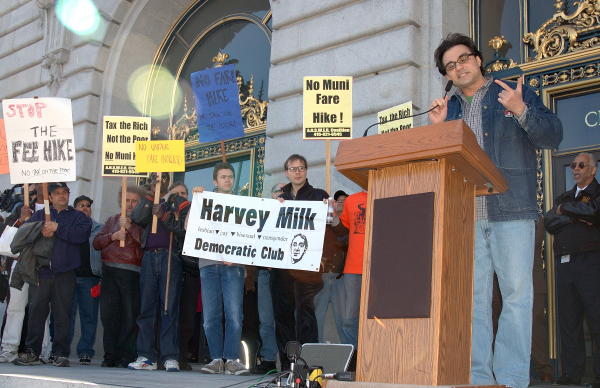 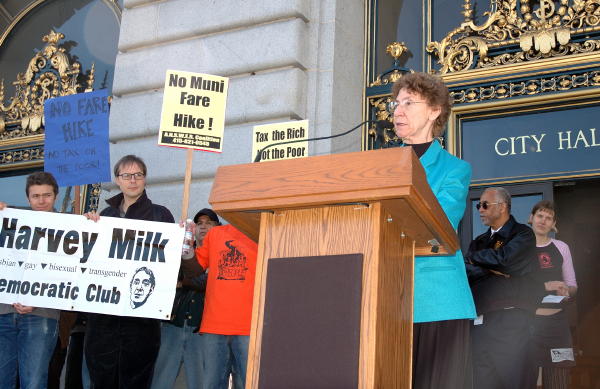 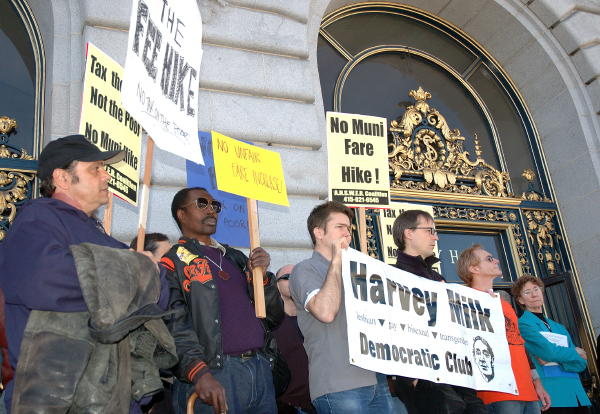 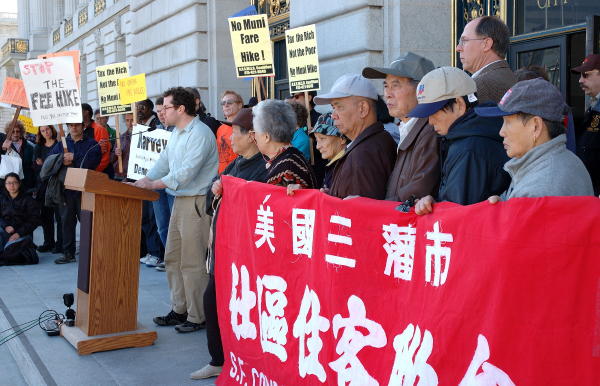 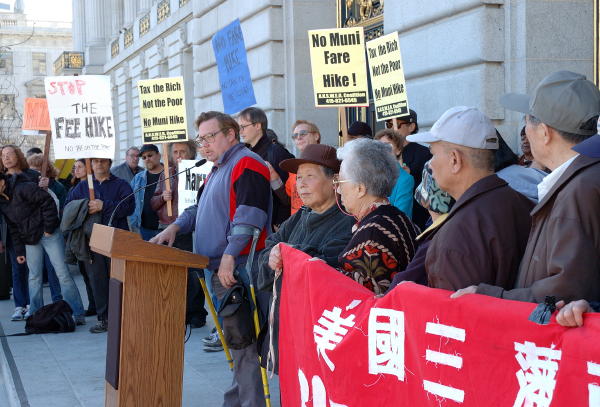 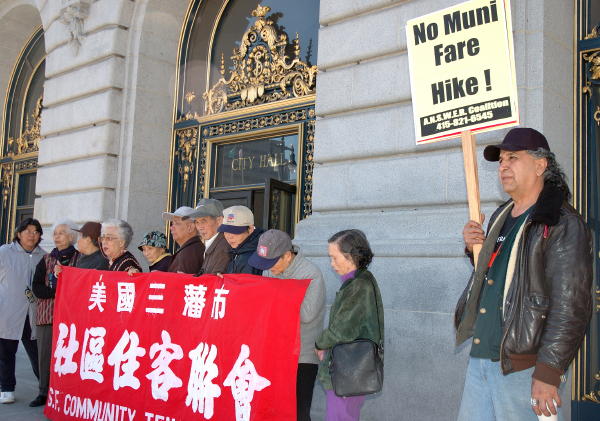 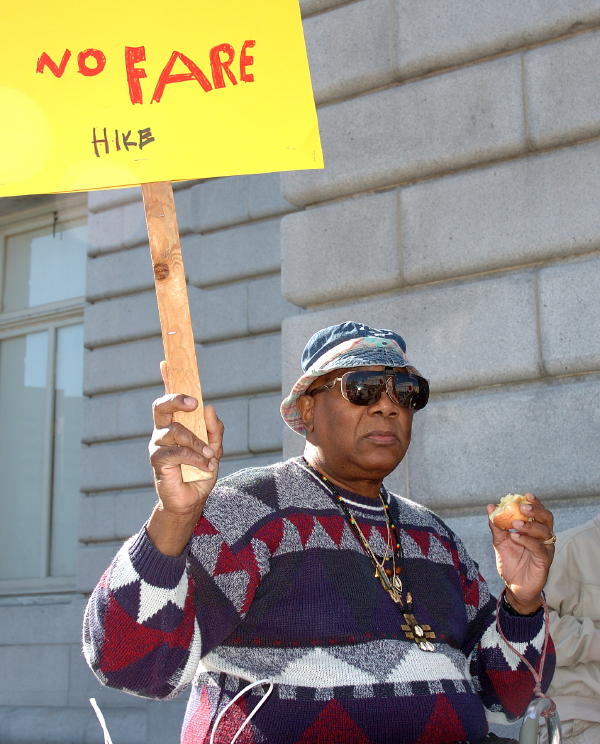 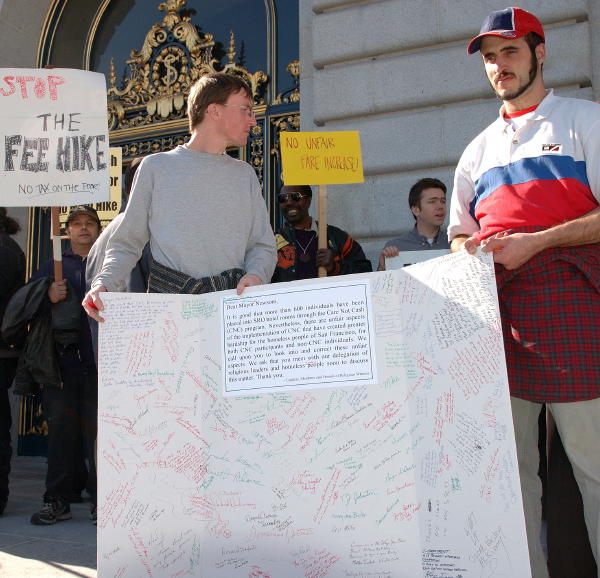 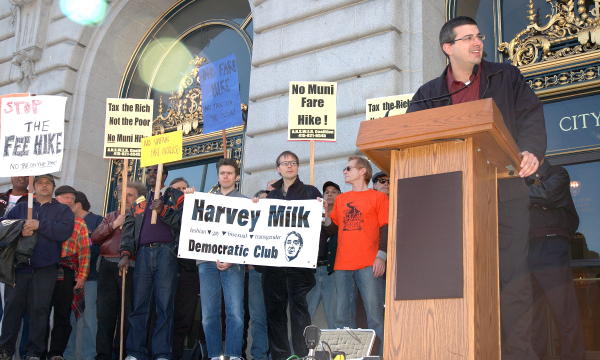 Photo by Bernie
Add Your Comments

§Fare Hike is a Tenant Tax-Proposed Alternatives
by SF Tenant
Monday Jan 31st, 2005 8:04 PM
Randy Shaw had a very instructive article on the 1/31/05 beyondchron.org website on the Muni Fare hike entitled "Stop the Tenant Tax" pointing out that
(1) 75% of the SF public transit riders are tenants;
(2) The property owners, who are most of the car owners, benefited from Schwarzeneggers cancellation of the progressive car tax increase;
(3) All areas of the City, including the Tenderloin, should be in a residential permit district, a means by which the City can raise money by charging for permits while at the same time providing cheaper parking for residents of the Tenderloin;
(4) Increase the parking fees at garages to make the visitors to the City pay more for driving into our congested City and using our City services, and since they have a car, are most likely able to pay more.

This will more than make up for the $108 annual tenant tax that is the proposed Muni fare increase and the people who can afford to pay more, namely property owners & car owners, will do so.

In the long run, which may need a ballot measure, the people who earn over $125,000 annually while working and/or who reside in the City should pay a City income tax, which will guarantee that the City has enough money for all City services.

While Muni and the media refer to the proposed $109 increase in fast passes as a “fare hike,” it is actually a tax on tenants. Tenants, many of them low-income, make up at least 75% of Muni riders, and over 95% of them are unable to purchase homes in San Francisco. We know why Bush and Schwarzenegger support regressive taxation, but San Francisco is supposed to be charting a more progressive course. Here’s how the tenant tax can be stopped.

Conservatives have struck pay dirt by characterizing progressive revenue raising measures as “taxes” while regressive payments are described as “fees” or, in the case of public transit, “fare hikes.”

The classic example is the vehicular license fee paid by car owners. The fee has been in effect in California since the 1930’s, and was among the state’s most progressive taxes in that it is based on the value of the car. Since wealthy people tend to own more expensive cars, they paid a higher vehicular license fee.

But Republicans in Virginia got the idea in the 1990’s to recast their own vehicle license fee as a “car tax.” This idea swept to California, where Gray Davis cost the state billions by drastically reducing what Republicans---and nearly all of the state’s media—now exclusively referred to as the “car tax.”

Davis’ agreement to reinstate the higher vehicular fee schedule was a major factor in his recall, and incoming Governor Schwarzenegger cost the state $4 billion in his first week on the job by rolling back the higher fee. The biggest winners from the rollback were luxury car owners; the losers, to the tune of at least $1.6 billion annually, are the children who attend the state’s public schools.

I hope San Francisco’s Municipal Transit Authority and our Board of Supervisors remember who benefited and who lost from the repeal of the vehicular license fee increase. I hope they also recall that thousands of San Franciscans earning $200,000 or more enthusiastically backed John Kerry even though his victory would have raised their taxes, and that these taxpayers have already saved tens of thousands of dollars from Bush tax cuts that they strongly opposed.

The question of who will bear the cost of maintaining Muni service cannot be addressed in isolation. Rather, San Francisco officials need to account for who is profiting and losing from Republican economic policies at the federal and state level, and begin in a very small way to start leveling the playing field.

This means that the proposed $108 annual tax increase on tenants to cover the city’s public transit operations should be off the table until other revenue-raising measures are imposed.

The first and most politically acceptable move is to both expand access to residential parking permits and raise the permit fee. As I noted in my story of January 6, Muni can raise $3.2 million simply by raising permit fees to existing holders by $3.00 per month. If permit fees were raised the same amount as the proposed $9 monthly tenant tax, $9.6 million would be raised.

In addition, there are vast stretches of San Francisco residential neighborhoods whose residents want to pay for parking permits but cannot until the city creates the districts. Areas where residential parking permits are currently unavailable include the Richmond and Sunset west of 9th Avenue, a three block area around Alamo Square, and big chunks of the Mission, SOMA and Potrero Hill.

Of course, the Tenderloin remains the only residential neighborhood where permit parking is completely unavailable. The reason? According to a former Parking Department official whose honesty was much appreciated, the city makes so much money from meter violations in the Tenderloin that it cannot afford to allow residents to park via permit.

If the above neighborhoods are added to the city’s residential parking program, 25,000 new permits could potentially be issued. At $100 a permit ($73 above the current low rate), that’s another $2 million annually bringing the total new revenue raised from residential parking permits to around $11 million.

Muni management has proposed to raise $13.5 million from raising parking fees and fines. This would bring the total new revenue to $24 million, which is enough to cover the Muni deficit without a tenant tax disguised as a fare hike.

But raising parking fees disproportionately impacts those who cannot afford either private or public garages, and particularly impacts Tenderloin residents who are barred from the city from free daytime parking on their own street. Raising fines for parking in front of a fire hydrant or such may be warranted, but not for a meter running out.

Rather than steeply raise parking fines, the more progressive approach---and one that addresses the huge savings San Francisco car owners received from Governor Schwarzenegger, is to raise the cost of parking in city garages. Increasing such fees not only allows non-San Francisco residents to help cover our public transit costs, but it could reduce traffic in the city as well as increase Muni’s ridership.

Historically, members of the Board of Supervisors have been reluctant to raise any costs to homeowners, and have instead followed the Republican approach of funding the costs of public services through user fees. The only way this can be avoided in the case of Muni is for our Supervisors to include the savings to car owners from the vehicular fee rollback in their calculations.

80 per cent of San Franciscan voters opposed Davis’ recall. If it had lost, the car registration fee would not have been reduced. The city’s car owners have received a windfall they neither sought nor desired----and fairness dictates that some of their savings goes to funding Muni.

How Muni is funded is not a dispute over raising taxes. Rather, it is a choice over whose taxes will be raised.
http://www.beyondchron.org/default.asp?sou...
Add a Comment
§Are these people talking about a real fare strike -- or a fake fare strike?
by Kevin Keating
(angryworkers [at] yahoo.com) Monday Jan 31st, 2005 9:37 PM
Are the people behind "Coalition for Transit Justice" calling for a real fare strike -- where all MUNI riders ride and refuse to pay fare -- or are they calling for a fake fare strike, where everyone engages in the empty token gesture of paying the already exorbitant $1.50 fare?

The fact that they have named themselves after "Transit Justice," the comically incompetent effort to resist the hike from $1.00 to $1.25 in 2003 doesn't bode well for their judgement in this.
Add a Comment
§transit fare increase
by kevin
Tuesday Feb 1st, 2005 12:05 AM
this is what happens when you let the city dictate your means of transportation. now you are at their mercy.
hay.. let's make some signs and march in a circle for an hour "that will teach them"
but tomorrow you will be on that bus handing over your money. like the sheep you are.
Add a Comment
§ANSWER
by Thom
Tuesday Feb 1st, 2005 7:39 AM
Of course ANSWER had to stick it's filthy claws into yet another "cause". I'm sick to death of these Stalinist assholes. "Tax the rich". What utter nonsense. SF just voted down 2 tax increases. They will vote down another as well. There is NO free ride.
Add a Comment
§another ANSWER
by bfd
Tuesday Feb 1st, 2005 11:31 AM
Instead of focusing on a fare increase, why not asked that ALL city employees, including MUNI workers take a 10 or even 15% cut in pay!

Hey, SF City employees are amongst the highest paid govt workers in the world! Take a cut so that the poor and elderly don't have to!!!!
Add a Comment
§Increase it now!
by Irish Cultural Attache from the Sunset
(irishculturalattache [at] gmail.com) Tuesday Feb 1st, 2005 1:57 PM
This is a ridiculous piece of narcissism from the San Franciso Gay Buardian Brigade - more of the same unAmerican bleating about the "working class" and the "poor" as an excuse to keep public transport underfunded. This is not Communist Russia. The fare is underpriced, for God's sake. It should be $2.00. If they're interested in fairness why don't these people take it up with Muni why their drivers don't enforce the rules and ask the homeless who board the buses to pay their fair share? As far as I can see most users of Muni - students, seniors and the homeless are getting away with far too much - everyone should pay full fare. Increase it now.
Add a Comment
§fuck off, Irish Nazi douche-bag
by anon. Irish American who hates capitalism
Tuesday Feb 1st, 2005 2:16 PM
What rock did this fucking leprechaun crawl out from under?

Did you ever hear the one about the Irish fascists who volunteered to fight on the side of Franco during the Spanish Civil War? The only action they ever saw was when they accidentally attacked their own side! Too bad Franco didn't have more of them on his side.

How do you say, "please commit suicide" in Gaelic?
Add a Comment
§anti-fascist irish
by L.A. @
Thursday Mar 31st, 2005 6:21 PM
there was the saint padriag brigade that fought on the mexican side in america's war of attrition against mexico. and we did fight and win our own war for independence nearlr 200 years after you [amerikans] won your own freedom, somewhat. so please take care not to lump us all into one basket.

and to say please commit suicide now in irish-gaelic is
déan féinmharú anois, le do thoil or directly tranlated commit suicide immediately, please.
Add a Comment
Support Independent Media
We are 100% volunteer and depend on your participation to sustain our efforts!