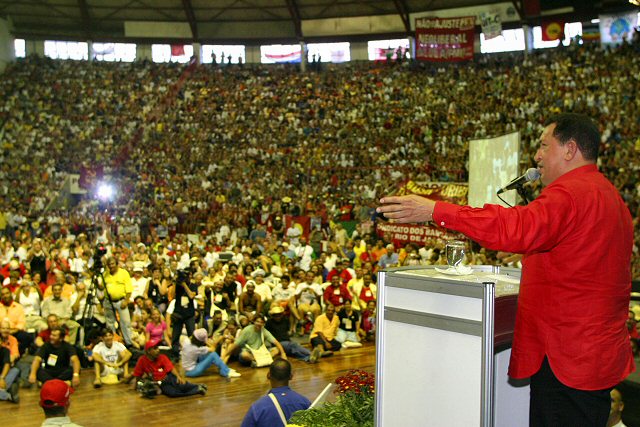 Caracas, Jan 30, 2005 (Venezuelanalysis.com).- Venezuelan President Hugo Chavez was warmly received at the 2005 edition of the World Social Forum in Porto Alegre, Brazil, where he held several meetings with local leaders, intellectuals and activists, and gave the closing speech at the Gigantinho Stadium. Chavez generated great interest among Forum participants, many of whom see Chavez and his project of political transformations being implemented in Venezuela, as an inspiration in the struggles for a more better world.

The Venezuelan President visited the Lagoa do Junco agrarian settlement in Tapes set up by Brazil's Landless Movement (MST), and later held a press conference with more than 120 media organizations, where he criticized the U.S. government for claiming to lead a fight against terrorism while undermining Democracy in Venezuela.

Chavez highlighted the recent creation of Latin American satellite TV network TeleSur, "which will allow us to tell our people’s reality in our own words." He added that TeleSur will be at the disposal of the people, not of governments.

The leader added that his country's military forces are undergoing a period of modernization of its weapon systems and resources, but asserted that it is aimed at defending the country's sovereignty. "Venezuela will not attack anybody, but don’t attack Venezuela, because you will find us ready to defend our sovereignty, and the project we are carrying forward," he added.

"The FTAA is death"

During the closing speech at the Gigantinho Stadium, the president added that 2005 arrived and the FTAA was not implemented. "The FTAA is death, what they go was mini-FTAA’s because the U.S. imperialism did not have the strength to impose the neocolonial model of the FTAA."

The President highlighted the Bolivarian Alternative for the Americas (ALBA), a proposal made by Venezuela in opposition to the Free Trade Agreement of the Americas (FTAA), and which emphasizes social and cultural exchanges above profit-based economic deals. "We can’t wait for a sustained economic growth of 10 years in order to start reducing poverty through the trickledown effect, as the neoliberal economic theories propose."

He praised the cooperation with Cuba, which, along with several Central American countries, receives Venezuelan oil at below market prices, in exchange for assistance in healthcare, education, agriculture and other areas. He highlighted that about 20.000 Cuban doctors work in Venezuela at free medical clinics in poor neighborhoods, and that Venezuela has used a Cuban literacy method approved by UNESCO that has allowed more than 1.3 million Venezuelans learn how to read and write. He said Venezuela is using Cuban vaccines, which now allow poor children to be vaccinated against diseases such as hepatitis.

The President criticized alleged media distortions with regard to plans by Fidel Castro and him to spread Communism in the Americas, overthrow governments and set up guerrillas, "after 10 years it seems like we haven’t been very successful."

"Cuba has its own profile and Venezuela has its own, but we have respect for each other, but we celebrate accords and advance together for the interest of our peoples." He said that any aggression against either country will have to confront the other, "because we are united in spirit from Mexico down to the Patagonia."

Chavez said U.S.-Venezuela political relations are unhealthy because of “permanent aggressions from there”. He criticized U.S. Secretary of State Condoleezza Rice who recently asserted that Chavez was “a negative force in the region.” He said those relations will stay unhealthy as long as the U.S. continues its policies of aggression. "The most negative force in the world today is the government of the United States," he said.

The President criticized the U.S. government for asking other countries to pressure Venezuela in the crisis with Colombia over the kidnapping of a Colombian guerrilla activist in Caracas last December. “Nobody answered their call… they are more lonely everyday.” He praised the cooperation of other Latin American countries in the resolution of the crisis, and mentioned that Cuban President Fidel Castro held talks with Colombian President Jorge Uribe to try to help in the resolution of the crisis. Chavez agreed to meet Uribe early in February to settle the dispute.

Chavez added that U.S. imperialism is not invincible. "Look at Vietnam, look at Iraq and Cuba resisting, and now look at Venezuela." In reference to the recommendations of some of his close advisors, he said that "some people say that we cannot say nor do anything that can irritate those in Washington." He repeated the words of Argentine independence hero José de San Martin "let’s be free without caring about anyone else says."

"When imperialism feels weak, it resorts to brute force. The attacks on Venezuela are a sign of weakness, ideological weakness. Nowadays almost nobody defends neoliberalism. Up until three years ago, just Fidel [Castro] and I raised those criticisms at Presidential meetings. We felt lonely, as if we infiltrated those meetings."

He added that those ideological and economic weaknesses will continue to increase. "Just look at the internal repression inside the United States, the Patriot Act, which is a repressive law against U.S. citizens. They have put in jail a group of journalists for not revealing their sources. They won't allow them to take pictures of the bodies of the dead soldiers, many of them Latinos, coming from Iraq. Those are signs of Goliath's weaknesses."

He said there were old and new actors in the geopolitical map who are coming into the scene and have an influence in the weaknesses and strengths of the U.S. hegemony. "Today's Russia is not Yeltsin's... there is new Russian nationalism, and I have seen it in the streets of Moscow... there is a good president, Mr. Putin, at the wheel." He also praised China's fast economic growth, and highlighted the new Spanish socialist government, "which no longer bends its knees in front of U.S. imperialism."

"The south also exists... the future of the north depends on the south. If we don't make that better world possible, if we fail, and through the rifles of the U.S. Marines, and through Mr. Bush's murderous bombs, if the is no coincidence and organization necessary in the south to resist the offensive of neo-imperialism, and the Bush doctrine is imposed upon the world, the world will be destroyed," he said.

Chavez warned of drastic weather changes that would bring catastrophic events if no action is taken soon, in reference to uncontrolled or little regulated industrial activity. Chavez added that perhaps before those drastic changes take place, there will be rebellions everywhere "because the peoples are not going to accept in peace impositions such as neoliberalism or such as colonialism."

"The U.S. people are our brothers"

He added that all empires come to an end. "One day the decay inside U.S. imperialism will end up toppling it, and the great people of Martin Luther King will be set free. The great people of the United States are our brothers, my salute to them."

"We must start talking again about equality. The U.S. government talks about freedom and liberty, but never about equality. "They are not interested in equality. This is a distorted concept of liberty. The U.S. people, with whom we share dreams and ideals, must free themselves… A country of heroes, dreamers, and fighters, the people of Martin Luther King, and Cesar Chavez."

Chavez thanked Spanish intellectual and director of Le Monde Diplomatique Ignacio Ramonet for saying that Chavez was a new type of leader. He said he is inspired by old types of leaders such as Christ, whom he described as "one of the greatest anti-imperialist fighters, the redeemers of the poor, and one of the greatest revolutionaries of the history of the world." The President mentioned Venezuela’s independence hero Simon Bolivar, Brazil's José Ignacio Abreu Elima, Che Guevara, "that Argentine doctor that traveled through the continent in a motorcycle and who was a witness of the U.S. invasion of Guatemala in 1955, one of the many invasion of the U.S. empire in this continent," and Cuban President Fidel Castro.

“Capitalism must be transcended”

"Everyday I become more convinced, there is no doubt in my mind, and as many intellectuals have said, that it is necessary to transcend capitalism. But capitalism can’t be transcended from with capitalism itself, but through socialism, true socialism, with equality and justice. But I’m also convinced that it is possible to do it under democracy, but not in the type of democracy being imposed from Washington," he said.

Chavez said that Venezuela is trying to implement a social economy. "It is impossible, within the framework of the capitalist system to solve the grave problems of poverty of the majority of the world’s population. We must transcend capitalism. But we cannot resort to state capitalism, which would be the same perversion of the Soviet Union. We must reclaim socialism as a thesis, a project and a path, but a new type of socialism, a humanist one, which puts humans and not machines or the state ahead of everything. That’s the debate we must promote around the world, and the WSF is a good place to do it."

He added that in spite of his admiration for Argentine revolutionary Che Guevara, he said Che´s methods are not applicable. "That thesis of one, two, or three Vietnams, did not work, especially in Venezuela."

The President cited Russian revolutionary Leon Trotsky by saying that "each revolution needs the whip of the counterrevolution to advance." He listed actions by the opposition and the U.S. government to drive him out of power. "But we resisted, and now have gone into the offensive. For instance, we recovered our oil industry... In 2004, from the oil industry budget we utilized $4 billion in social investments, education, health, micro-credits, scholarships, and housing, aimed at the poorest of the poor, what neoliberals call waste of money. But that is not a waste of money because it is aimed at empowering the poor so that they can defeat poverty. He added that "that money before stayed out of Venezuela or just benefited the rich."

He criticized privatizations by saying that "privatization is a neoliberal and imperialist plan. Health can’t be privatized because it is a fundamental human right, nor can education, water, electricity and other public services. They can’t be surrendered to private capital that denies the people from their rights."

Chavez defended Brazilian President Luis "Lula" Da Silva, who has been sharply criticized by the Latin American left, and who was booed during his speech at the World Social Forum.

"I say this from the bottom of my heart. In Venezuela at the beginning of my presidency, many of my supporters criticized me and asked me to go at a faster pace [to implement changes], and be more radical, but I considered that it was not the right moment because each process has several phases and different rhythms that not only have to do with internal situations in each country, but with the international situation at the time. So, risking that you make some strange noise, I want to say that I like Lula, I appreciate him, and he is a good man, of a great heart. He is a brother, a comrade and I send him a hug, my love and affection. I'm sure that with Lula and the people of Brazil, with Nestor Kirchner and the Argentine people, with Tabaré Vasquez and the Uruguayan people, we will be opening the path to realizing the dream of a united Latin America."

http://www.venezuelanalysis.com/news.php?n...
Add Your Comments
LATEST COMMENTS ABOUT THIS ARTICLE
Listed below are the latest comments about this post.
These comments are submitted anonymously by website visitors.