Add an Event
Newswire
Calendar
Features
Home
Donate
From the Open-Publishing Calendar
From the Open-Publishing Newswire
Indybay Feature
Publish to Newswire
Add an Event
Related Categories: Central Valley | Global Justice & Anti-Capitalism
Confessions of an Economic Hit Man
by Mike Rhodes (MikeRhodes [at] Comcast.net)
Monday Jan 31st, 2005 10:33 AM
John Perkins was an economic hit man for the CIA. He told the story of how the CIA undermined and overthrew governments throughout the world. His presentation was given at a workshop at the World Social Forum in Porto Alegre, Brazil. 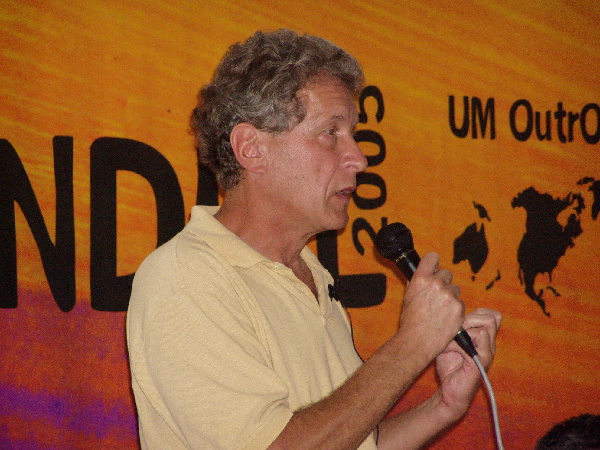 Confessions of an Economic Hit Man
By Mike Rhodes
January 31, 2005

Porto Alegre, Brazil - John Perkins, speaking at the World Social Forum, told the audience that he was an economic hit man for U.S. imperialism. He described his job with the CIA as being technically legal, but morally and ethically bankrupt. Perkins would meet with the leader of the targeted country and encourage them to accept a large loan for a project that both the CIA and the leader knew the country could not afford. If the loan was accepted, the money would go to a bank in the US, and US corporations would get the contract to work on the job. The CIA would then have their hooks in the client state.

Perkins said that if this kind of loan was arranged between individuals it would be called extortion. “If you encourage someone to take a loan from you that you both know they have no way of paying back, with the expectation that you will get ‘something’ from them later, that would be illegal. But in the international arena, it is not illegal.” Perkins said that once the country is in debt, they can be manipulated to support US policy and to open their natural resources to US corporations. This form of economic development is called the neo-liberal model.

There have been cases where the heads of state have not wanted to accept loans and become indebted to the IMF and World Bank. Perkins said that he would remind the leader about what has happened to numerous heads of state around the world - many have been assassinated or have been the victim of a coup. The choice, according to Perkins, was simple - either the leader accepted our money, which would make him, his family, and his business associates fabulously wealthy, or the US would remove him from office.

There were occasions when the leader of a country would refuse to go along with the proposals of the economic hit men. When that happened, the CIA would put the wheels in motion to remove the leader from office. With nearly unlimited resources, the CIA is able to back opposition movements, support corrupt military leaders, or undermine the economy to force any head of state who stands up to the United States to leave office. Sometimes this meant sending in “the jackals.” Perkins described the jackals as CIA “hit men” who would be used when other means failed. He described several instances of heads of state in Latin America who were the victims of the jackals. Panamanian president Omar Torrijos was one such victim.

Sometimes, both the economic hit men and the jackals fail to bring a country under US domination. That is when politics is carried out by other means. Perkins said that is what happened in Iraq. Saddam could not be convinced to sell out and the jackals could not get to him. This left the US with only one option - war.

Immediately after the speech by John Perkins, Venezuelan president Hugo Chavez spoke at a press conference. See the IMC article about the press conference here: http://www.indybay.org/news/2005/01/1718352.php . At this press conference, many of the methods used by the CIA to overthrow foreign leaders were described. Stories in the press have appeared that discredit Chavez by connecting him to Saddam Hussein and Moammar Kadafi, opposition groups encouraged by the CIA have held strikes and economic boycotts in Venezuela, and recently the US has tried to provoke an incident between Colombia and Venezuela. There have been rumors all week, at the World Social Forum, that the US is trying to get Colombia to invade Venezuela. In an incident last week between these two countries, Chavez said that the United States was the only country encouraging Colombia to take hostile action against Venezuela. Chavez said that all the other countries in Latin America came together to help mediate the dispute and that he has a meeting set up with the Colombian president next week.

John Perkins has an interesting story to tell. His book, Confessions of an Economic Hit Man, is from Berrett-Koehler Publishers and is available online and in bookstores.

###
http://www.bkconnection.com/
Add Your Comments
LATEST COMMENTS ABOUT THIS ARTICLE
Listed below are the latest comments about this post.
These comments are submitted anonymously by website visitors.