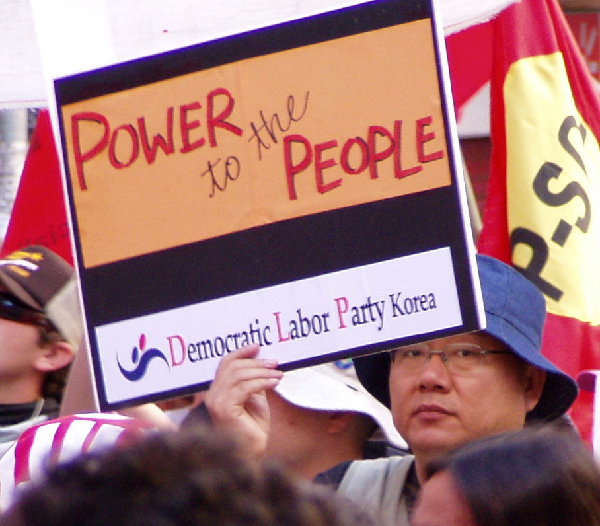 
Porto Alegre, Brazil - The fifth World Social Forum started as an expression of diversity in the world, with many voices that meet the universal wishes for tolerance, justice, peace and equality. And it closes according to these same wishes. But this Forum had the challenge of being more proactive in promoting common issues and proposing actions. It was completely self-organized. All the activities were developed by the participant organizations. Workshops and related events were held in 11 different areas where panels accepted proposals that were discussed. So far, there are 352 proposals from the panels. The proposals are being displayed today. They will be published in a way that movements, organizations and people can read and use them.

This social forum happened in a unique terrain: the World Social Territory, situated along Guaiba river, where we discussed proposals and shared the moment of being together. There were contradictions and conflicts. We celebrated a collective life and common responsibility in an open, public, collective and democratic territory. The Forum’s territory was a laboratory for changing life. It was a place where initiatives converged. It was also the meeting of the Forum community and the Porto Alegre community, the city whose symbol is the sunset over the Guaiba river which has no owner, it wasn’t built, it belongs to everybody and to nobody in the same way.

At the Forum’s territory we brought into real life many transforming practices. The bio-construction proved that a house can be built in harmony with nature . The solidarity economy, fair trade, and justice was present when purchases were made. Challenging practices, such as the use of free software, translators, volunteer networks, and new ways of communication were shared and helped make the event a success.

This year, for the first time, the Youth Camp was inside the Forum’s Territory, creating collective practices, self-organization and going further in the defense of Human
Rights.

This year, the self-organization was a part of every practice. Thus, instead of big events with big lecturers, there was a plural and democratic discussion of many different themes. There were activities that allowed many organizations and people to meet, making networks, planning actions, permitting new meetings. The Forum doesn’t start or finish at this terrain - rather it is the moment to join movements which struggle, to get together and keep fighting.

New proposals will come in this process. This Forum has become a part of people’s heart and actions. It was in total, 155,000 participants; 35,000 were in the Youth camp, and 6,880 translators.. People from 135 countries involved in 2.500 activities. There were 2.800 volunteers working for consciousness and solidarity. Everybody helped to contribute to create the
Forum’s ideas, which are spreading thought the planet. Millions of people are connected to the Forum through many ways of communication.

The Forum is a spectacle of diversity which started on January 26, 2005 in the afternoon: 200,000 people walking through Porto Alegre. There were artists on the street in front of a blue planet carried by many hands. The social and popular movements, the unions, the NGOs. And many other faces and nuances. Turbans, indigenous hats. Indians cloths. Blue eyes, fair skins, the expression of the black consciousness.

The Forum helped to inspire many actions that will make organizations and individuals stronger and more organized, with agendas for the whole year. The dialogue and the meetings helped to establish a new world view for many participants and has opened new horizons for international solidarity. In 2006, the World Social Forum will be decentralized, operated in many places of the world. In 2007 it will be in Africa. Self-organized and democratic, the World Social Forum is created by organizations and people who want to build another world with peace, justice and equality. The theme of the World Social Forum is Another World is Possible.
§Youth Camp
by Mike Rhodes (MikeRhodes [at] Comcast.net) Monday Jan 31st, 2005 7:33 AM 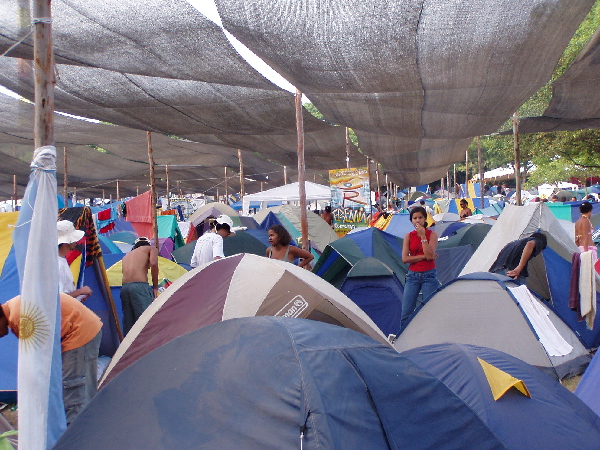 There were 35,000 people living in tents at the World Social Forum
Add Your Comments
Support Independent Media
We are 100% volunteer and depend on your participation to sustain our efforts!