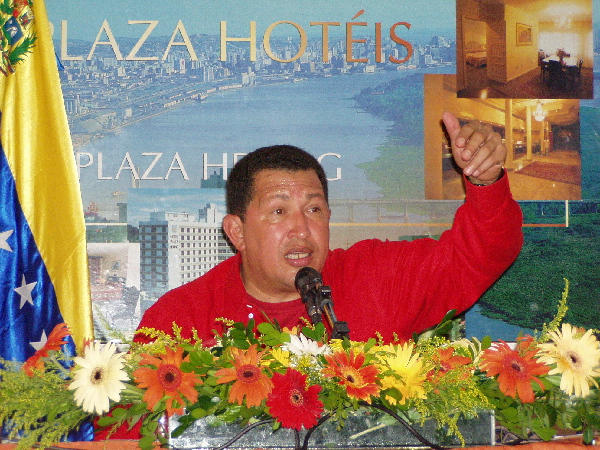 Porto Alegre, Brazil - Hugo Chavez, the president of Venezuela came to the World Social Forum in Porto Alegre, Brazil today. Speaking at a press conference, before attending a 6 PM rally at the Gigantinho stadium, Chavez spoke about the increasing tension with Colombia. Rumors have been circulating throughout the forum that the United States was trying to provoke Colombia to attack Venezuela, and overthrow Chavez. After an incident between the two countries last week, Chavez said, “all of the nations in Latin America came together to get the two countries to work out their differences.” The United States was the only country in the world encouraging Colombia to take hostile action against Venezuela.

Chavez was adamant that capitalism will not solve the problems of hunger and poverty in the world. He said “we need to re-invent socialism. It won’t be the socialism that we saw in the Soviet Union, but it will emerge as we develop systems that are built on cooperation, not competition.” Venezuela now has 20,000 Cuban doctors in their country and is providing Cuba with oil. Venezuela has a lot of oil to sell and that is one of the reasons why the United States is so interested in the country.

Turning to the issue of the media, Chavez said that he has started an initiative to make the media more responsive to the needs of the people. He said that the media, particularly in the United States, has portrayed him as a negative figure. “The L.A. Times, The New York Times, The Washington Post, and others are always showing pictures of me shaking hands with Saddam Hussein and Moammar Kadafi. Sure, I met with them but I have also met with Bill Clinton and the Pope but they (corporate media) do not print those pictures.”

A law has been passed in Venezuela limiting what the media can report and broadcast. In addition to blunting the corporate media’s constant attacks of Chavez, these laws will also limit the amount of sex and violence in the media. Chavez said that the new laws “allow journalists to criticize me but they are not allowed to call for the overthrow of the government or advocate terrorist acts.” Some media observers are uncomfortable with this censorship and worry about what will happen if the right wing comes to power.

The press conference itself was an interesting event. Chavez allowed five questions from the hundreds of journalists in attendance. The first two questions were reserved for members of the alternative/independent media, one for press agencies, one from a journalist from Venezuela, and another for a Brazilian journalist. The press conference was nothing like the staged events held by the Bush administration. Journalists were free to ask any question they wanted with no fear of retaliation. If a reporter asks the president of the United States a question that makes him uncomfortable, that reporter is put on a list and not invited back. He or she may even be fired from their job. The openness with the press by Hugo Chavez was in stark contrast to the threats and intimidation experienced by U.S. journalists covering their president.

The 5th World Social Forum brought over 100,000 people together for the last four days under the banner of “Another World is Possible.” With over 2,000 workshops, an opening day march with 200,000 participants, and representatives from over 100 countries the event was an overwhelming success.
http://www.forumsocialmundial.org.br
§Journalists talk to President Hugo Chavez
by Mike Rhodes (MikeRhodes [at] Comcast.net) Sunday Jan 30th, 2005 5:50 PM 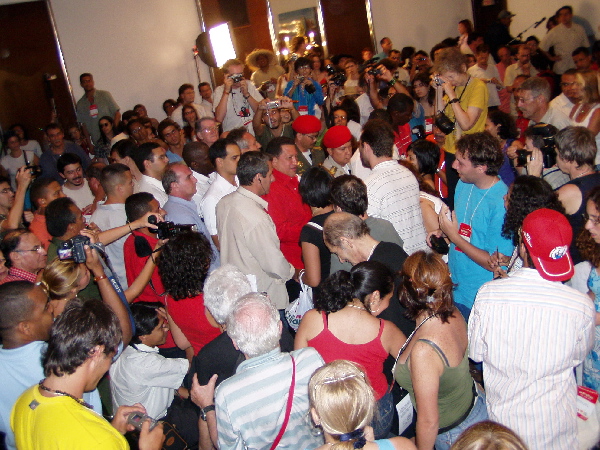 Photos by Mike Rhodes
http://www.forumsocialmundial.org.br
Add Your Comments
Support Independent Media
We are 100% volunteer and depend on your participation to sustain our efforts!