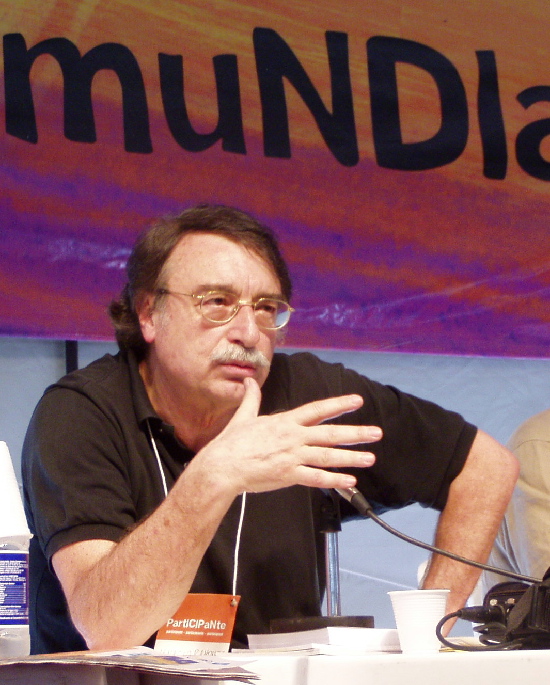 Porto Alegre, Brazil - Participants at the World Social Forum heard today that corporate control of the media and media consolidation is a worldwide phenomena. Ignacio Ramonet, president of Media Global Watch, said “in France a defense contractor just bought La Figaro. The danger of this is that the corporations, who are buying up major media companies have no, or very little, connection with the media industry and thus no commitment to journalistic integrity.” Ramonet also said that newspapers are decreasing in popularity as a means of communication. He said “this is part of a trend that has happened in many other industries.” Technology is affecting print media’s ability to stay competitive. Newspapers are losing 2% of their readership each year and the trend is expected to continue.

Media Global Watch is a project that emerged out of the 2003 session of the World Social Forum. Ramonet defined Media Global Watch as a “fifth power”, responsible for controlling the so called “fourth power” – the press -, after two years of existence, Media Watch already has bases in some countries like France, Italy, Brazil and Venezuela.

The 5th World Social Forum is being held in Porto Alegre, Brazil. There are over 100,000 participants attending seminars and workshops on a wide range of issues. The theme of the forum is Another World is Possible.

Ramonet was pessimistic about the future of large daily newspapers. He said that he believes it is an industry that is in the process of disintegration and is being replaced with newer technologies. “There is an issue of credibility with print media and that is a significant factor in their decline,” Credibility is being affected by media consolidation, the purchasing of newspapers by non-media corporations, and the influence of advertisers and politics in editorial policy. Ramonet said “many large newspapers are practically giving their product away. The reduction in revenue from subscribers and individual sales is increasing the influence of advertisers in controlling the overall content.”

Media Global Watch is working to support journalists so they can tell the stories that matter to newspaper readers. Media consumers need to receive information about events that affect their lives, accurate news and analysis about the popular movements, and newspapers that are not driven by the needs of a corporate agenda. Ramonet said “people need to receive information necessary to carry out their duty in a democratic society.” Because this is not happening, there has developed a crisis that has opened a space for alternative and independent media to increase its influence. Alternative/independent media is more professional and respected because they are not controlled by the interests of the corporate elite.

According to Ramonet, the Internet is the fastest growing media format in the world. Even though only 5% of the people in the world have Internet access, it is a major source of information in industrialized countries. With high speed Internet connections, people can access print, audio, video, and interactive information services. Among young people, he says they are getting their information from the Internet, cell phones, and I-Pods. Ramonet said “there are now places where you can get your news directly from your cell phone. There are information channels that you can subscribe to that provide subscribers with specific news and information.”

Media Global Watch is encouraging groups worldwide to monitor the media and demand that they accurately report on the popular movement. Media Global Watch says there are groups that monitor the media about one issue or another, but what is needed is a more comprehensive approach to the work. If we are to hold corporate media accountable, it was argued, we must have a broad picture of what they are doing. One group doing this work in the Bay Area is the Media Alliance. You can find more information about them at: http://www.media-alliance.org/

In addition to the Media Global Watch workshop at the World Social Forum, there are other groups meeting to discuss alternative and independent media. On Sunday, for example, there will be a workshop which promises to train participants in how to build a low power FM station - from the ground up. There have been discussions about the establishment of a world wide progressive satellite system for radio and TV, use of the Internet (Indymedia!), and last night there was a celebration to honor Brazil DeFato, a progressive weekly newspaper that is now publishing from Sao Paulo, Brazil.

Speaking at the second anniversary celebration for Brazil DeFato was Che Guevara’s daughter, Aleida Guevara, Media Benjamin from Global Exchange, Dom Thomas Balduino a founder of the landless workers movement in Brazil, and several other speakers from throughout the world. Balduino spoke eloquently about the need for a voice of the people. He said it is essential to have a publication so the different sectors of the popular movement can communicate with their base and among each other.

The discussions at the World Social Forum about corporate media accountability and alternative/independent media go well together and are not seen as competitive strategies. Most participants believe that both approaches to the work are necessary. The forum continues through Sunday, January 30, 2005.

For more information about the World Social Forum see: http://www.forumsocialmundial.org.br/ 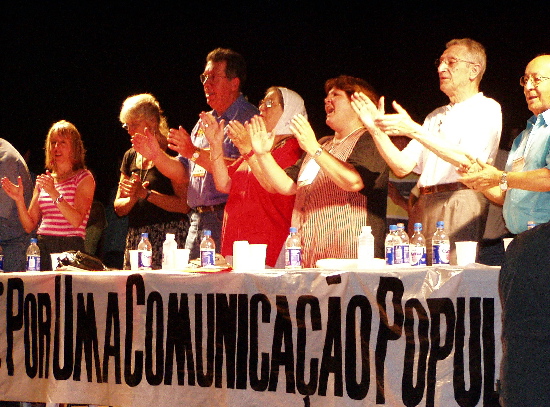 Aleida Guevara, Che’s daughter is third from the right. Photos by Mike Rhodes
http://www.forumsocialmundial.org.br/
Add Your Comments
Support Independent Media
We are 100% volunteer and depend on your participation to sustain our efforts!