by Mike Rhodes (MikeRhodes [at] Comcast.net)
The Brazilian Landless Workers Movement is the largest social movement in Latin America and one of the most successful grassroots movements in the world. Hundreds of thousands of landless peasants have taken onto themselves the task of carrying out a long-overdue land reform in a country mired by an overly skewed land distribution pattern. Less than 3% of the population owns two-thirds of Brasil's arable land. 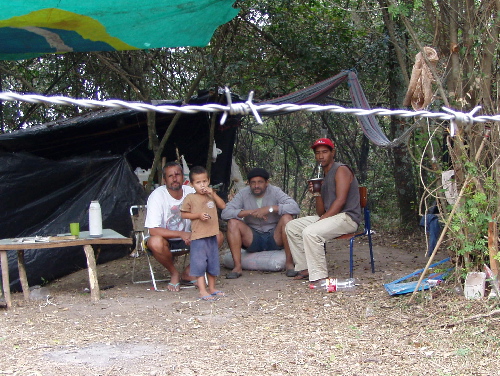 Porto Alegre, Brazil - The Movement of Landless Rural Workers (MST) has occupied and controls huge amounts of arable land in Brazil. Because of militant action, and in some cases ambiguous land ownership issues, the MST has given hope to the millions of Brazilians living in poverty and who are without land. Over the last 20 years these landless farm workers have taken over and now occupy more than 20,000 square miles of land - that is about the size as the entire Tulare, Fresno, Madera, Merced, and Stanislaus counties combined.

Vardoci Mostarda is typical of the landless farmworkers who are driven by poverty and desperate conditions to participate in land seizures with the MST. “I lost my job in the rice fields and was forced to move to a slum in a large city. There, I began to sell fruit from a cart, but there was no future in that.” Mostarda said he met a militant from the MST who told him about the movement and showed him that it was possible to have a better life and return to the land. He ended up at Camp Monte Pill, outside of Porto Alegre in Southern Brazil, about a year ago. The camp sits on the roadside next to 1,800 hectors of land (approximately 4,450 acres) which is now occupied by 110 families.

Within a month of occupying the land at Monte Pill, the families were evicted by the police. Jaqueline, one of the leaders at the camp, says that it is not unusual for groups to be evicted by the police. “In response, we marched to the capital and demanded our right to this land,” Jaqueline said. The march and new encampment by the families at the government building in Porto Alegre ended in an agreement that they could return to Camp Monte Pill. There, by the side of the road, they built temporary housing out of sheets of black plastic. Jaqueline and the others are confident that they will soon move onto the land.

Already, one of the families has cut the barbed wire and is living on the property. What gives the MST the strength to take over land and defy the police, landowners, and government is their ability to organize and mobilize the people. There are over one million Brazilians living on land that has been taken over by the MST, they are active in almost every state, and they even run their own training schools.

But the road to land ownership is not always easy. Hundreds of MST members have been killed by the police and the landowners death squads as they attempt to threaten and intimidate MST members into giving up there struggle for land. “We can’t rely solely on the courts to settle land ownership disputes,” said long time MST activist Edda Isernhagen. “We have lawyers and friends in government who can help us determine the legal ownership of the property that is being considered.” Most property that is occupied by the MST is not currently under production, has been abandoned, or is owned by the government. In the case of Camp Monte Pill, the government has agreed to pay the owner of the property for the land. The government will then provide the MST with loans so they can establish the cooperative.

At the MST schools that operate throughout the country, members learn how to successfully run a farm, process crops, and get their products to market. The collectives that are established on the occupied lands are not set up to be “for profit” businesses. They are cooperatives who define success by their ability to help build the movement and to provide a better life for their members. Successful cooperatives share their food and resources with the camps that are in the process of establishing themselves.

Some MST militants like Jaqueline move from camp to camp helping them to get established. She said she lived on a cooperative for 10 years but now is motivated by helping others return to the land. Jaqueline believes “a new world is possible” and is doing what she can to empower the landless workers of Brazil.

For more information about the Movement of Landless Rural Workers in Brazil see:
http://www.mstbrazil.org/

For a detailed account of the Movement of Landless Rural Workers in Brazil see the book by Sue Branford and Jan Rocha - Cutting the Wire. The book was published in 2002 by Latin America Bureau, 1 Amwell Street, London EC1R 1UL
END_OF_DOCUMENT_TOKEN_TO_BE_REPLACED
§Vardoci Mostarda
by Mike Rhodes (MikeRhodes [at] Comcast.net) 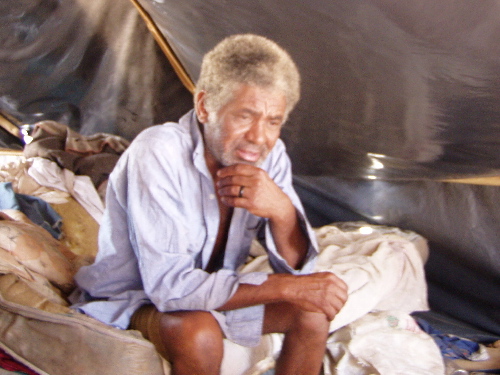 Vardoci Mostarda joined the landless movement to create a better life for himself and his family.
END_OF_DOCUMENT_TOKEN_TO_BE_REPLACED
§Camp Monte Pill
by Mike Rhodes (MikeRhodes [at] Comcast.net) 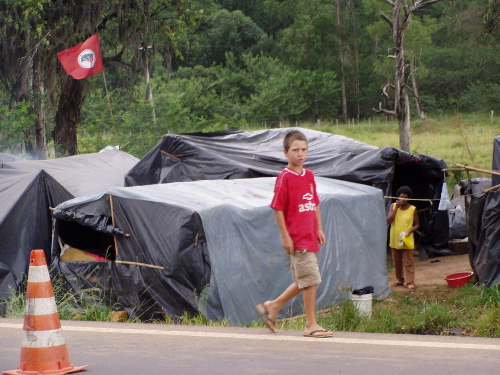 Camp Monte Pill is located on the roadside next to the property which the MST is about to occupy.
END_OF_DOCUMENT_TOKEN_TO_BE_REPLACED
§Jaqueline
by Mike Rhodes (MikeRhodes [at] Comcast.net) 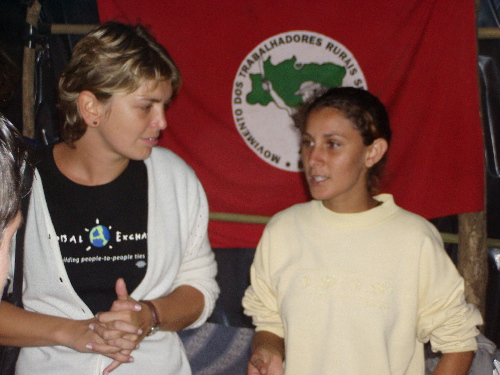 Jaqueline tells her story. She believes “a new world is possible” and is doing what she can to empower the landless workers of Brazil. To Jaqueline’s left is Global Exchange tour translator Denise
END_OF_DOCUMENT_TOKEN_TO_BE_REPLACED
§Edda Isernhagen
by Mike Rhodes (MikeRhodes [at] Comcast.net) 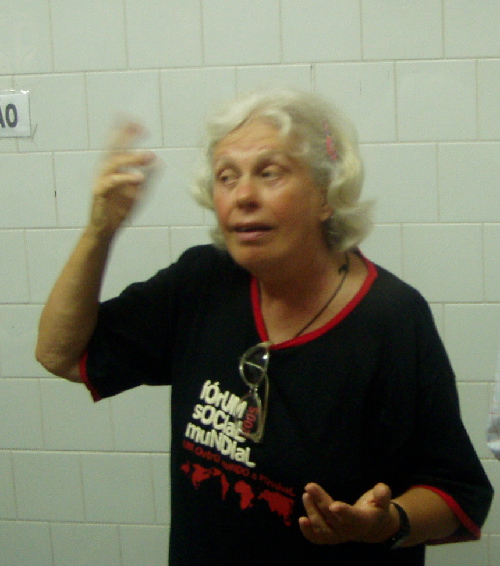 Edda Isernhagen says that while the MST does pursue its legal options, it is really the popular movement that ensures that land take overs are a success.
END_OF_DOCUMENT_TOKEN_TO_BE_REPLACED
§MST school in Veranopolis, Brazil
by Mike Rhodes (MikeRhodes [at] Comcast.net) 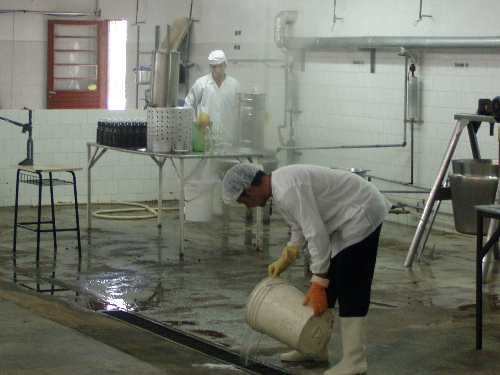 The MST trains its members in food preparation in this school in Veranopolis
END_OF_DOCUMENT_TOKEN_TO_BE_REPLACED
§Two of the children at Camp Monte Pill
by Mike Rhodes (MikeRhodes [at] Comcast.net) 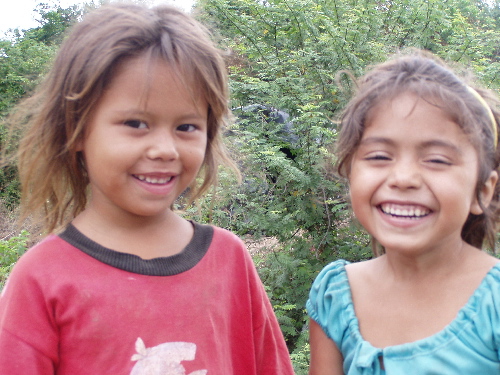 All photos by Mike Rhodes
END_OF_DOCUMENT_TOKEN_TO_BE_REPLACED
Add Your Comments
Latest Comments
Listed below are the latest comments about this post.
These comments are submitted anonymously by website visitors.
TITLE
AUTHOR
DATE
Part 2
NY IMC journalist
Homeless Camp in Brasil Raided, Two Killed, NYC IMC Volunteer Arrested
Re-post from NY IMC
Support Independent Media
We are 100% volunteer and depend on your participation to sustain our efforts!