Add an Event
Newswire
Calendar
Features
Home
Donate
From the Open-Publishing Calendar
From the Open-Publishing Newswire
Indybay Feature
Publish to Newswire
Add an Event
Related Categories: California | Arts + Action
Mexican Mural School - Art of Estaño
by Mark Vallen-Art For A Change
Monday Jan 17th, 2005 2:51 PM
A new website reveals the history of the Mexican Muralist Movement and one American artist’s personal connection to it. Philip Stein, also known as Estaño, worked alongside the famed Mexican Muralist David Alfaro Siqueiros from 1948 to 1958. He assisted the Mexican master in painting some of his most famous murals. Now a brand new website showcases the stirring artworks created during Estaño’s long career. 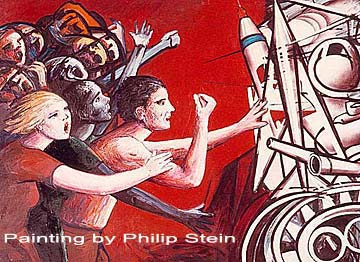 Philip Stein (Estaño) is a master artist in his own right. Indelibly influenced by Mexican muralism in both style and content, Estaño has continued to create artworks based on contemporary realities. His paintings are collected and exhibited around the world, and now mexicanmuralschool.com will serve as the premiere online gallery for his work, as well as an international educational resource for students and art lovers. In addition, Estaño has written an exceptionally detailed biography of Siqueiros, titled "Siqueiros, His Life and Works". Combining painstaking research, personal experience, and passion for the subject and ideas at hand, the work is the definitive biography of Siqueiros, and has been designated so by the Mexican Cultural Commission. Moreover, Estaño writes with enormous conviction on the importance of Mexican Muralism as a revolutionary artistic movement. Through his book he traces the political and aesthetic battlefields from which Siqueiros emerged, naturally keeping the focus on this giant in Mexican Art... but never straying to far from the fact that Siqueiros was part of a historical process, the result of material forces, and a figure in a larger movement.

An unrepentant radical living in reactionary times, Estaño reminds us all that the Muralists were actually political militants who held uncompromising opinions on art and everything else. He delivers his view of history as only an active participant can. In keeping with the theme of progressive humanistic causes and the march towards justice, the official launch date for http://www.mexicanmuralschool.com will be Martin Luther King Jr. Day, Monday January 17, 2005.

The early twentieth century was marked by the conflict of ideas... on the battlefield, in the classroom, on the street corner. Revolutions on all corners of the globe, economic crises, and technological advancements made everyone question where the world was headed. As Europe hurtled towards its eventual conflict of ideologies, the US was emerging as a major world player both economically and militarily. With its revolution, Mexico sought to free itself from the mantle of European colonial values, and create a new and unique national identity. The artists who emerged out of revolutionary Mexico in the 1930s would launch the most successful attempt in world history at unifying art and politics. They created a national artform that sent shockwaves throughout the world which are still reverberating today. Using techniques learned in Europe, master artists such as David Alfaro Siqueiros, Diego Rivera, and José Clemente Orozco took their art directly to the people of their tumultuous country, evoking the ideology of their revolution on the walls of major public buildings in the form of murals. In addition to the sheer technical mastery of these artists over their new medium, their efforts were unparalleled as their taught their audience who they were, where they had come from, and where they were going. The Mexican Muralists showed the country as it looked before colonial conquest by Europeans... they revealed the agony of centuries of oppression of the indigenous population, and ultimately, brought all of this history together as they plunged their viewers into the ideological conflicts of the day.

The influence of the muralists was not limited to Mexico; all three artists would also create murals in the United States. Mexico City for a time become the pinnacle of artistic fervor, attracting some of the world’s most noted intellectuals. Furthermore, avante-garde American artists of the Great Depression Era would be influenced both in content and technique, by what was going on in Mexico. In the 1960s and 70s, young Mexican-Americans would rediscover the art of the 1930s masters, giving rise to the Chicano mural movement. As we enter the 21st century and see images by Diego Rivera gracing personal bank checks, and handbags painted with the portrait of Frida Kahlo, we must ask ourselves - what was the Mexican Mural movement and what can we learn from it? It is for this reason, that http://www.mexicanmuralschool.com has come into being.

http://www.mexicanmuralschool.com
http://www.art-for-a-change.com
Add Your Comments
Support Independent Media
We are 100% volunteer and depend on your participation to sustain our efforts!