by Arlene Eisen (arlenesreport [at] yahoo.com)
BlueStar PR's Zionist Bus Shelter campaign is filled with lies and hate-filled, anti-Palestinian propaganda (http://www.bluestarpr.com). There is a petition going around to BAN their ads--SIGN IT!
Read SF Bay View Article
END_OF_DOCUMENT_TOKEN_TO_BE_REPLACED
§This poster lies
by more 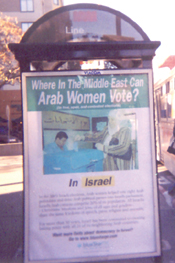 This poster can be seen at bus stops around San Francisco. Don’t believe the hype.

Israel is not a democracy. Israel is an apartheid state where the government mandates official discrimination against Palestinians, who live as second class citizens within the boundaries of Israel that the UN recognized in 1967.

They are 20 percent of the Israeli population, but, in the Israeli Parliament (Knesset), they have only 12 out of 120 seats — one of which is held by a woman. In 2001, the parliaments of Syria, Tunisia, Morocco, Sudan, Algeria, Jordan, Egypt and Lebanon all had a higher percentage of Arab women than did Israel.

This poster, mounted on bus shelters around San Francisco, is a hypocritical attempt to make Israel seem like it cares about Palestinian women’s liberation when it continues to deny fundamental human rights not only to Palestinian women but also to their fathers, brothers, sons and husbands.

l Israel is a “Jewish state” in which Jews are the majority, where Jews are entitled to special treatment and preferential laws and where any Jewish person from anywhere in the world has a right to claim Israeli citizenship. (Palestinians have no right of return to the homes they lived in before Israel pushed them out in 1948.) By privileging Jews, the state treats others as second-class citizens. Israel has no constitution, and its basic law includes no right to equality.

l Jewish organizations, like the Jewish National Fund, have semi-governmental status and benefit Jews only. They have special rights to housing, land development, tax benefits.

l Only those who have served in the Israeli Army (or Jewish Yeshiva students) are eligible for benefits, including access to public employment, housing, scholarships and mortgages.

l Of the 30 areas in Israel with the highest unemployment rates, 26 are Palestinian.

l Strict residential segregation is the rule in Israel. Only 8 percent of all Palestinians with (second-class) Israeli citizenship live in cities with Jewish populations, and in those cities, they live in segregated neighborhoods.

l One hundred Palestinian villages within 1967 Israeli boundaries are not recognized by the Israeli government and therefore receive no electricity, water or sewer services, no paved roads, schools, hospitals or clinics. (Yet Jewish settlers are 10 percent of the population of the West Bank and Gaza and consume more than 50 percent of the water.)

l Palestinians with (second-class) Israeli citizenship cannot buy land and cannot build on land they own without an Israeli permit, which is nearly impossible to secure.

l Palestinian political parties admitted into the Knesset cannot stand for election if they take any position against the Israeli occupation of Palestinian land.

l Palestinians with (second-class) Israeli citizenship have no freedom of movement. They cannot visit families or friends who live in the West Bank or Gaza. With the new apartheid wall, Israel has grabbed more land and forcibly separated more families.

Racism against Palestinians is on the rise. In 1998, 39 percent of Jewish youth told survey takers they “hated” Arabs, 44 percent believe “Arab” citizens should be deprived of some of their rights, 19 percent thought “we should get rid of them.”

And there is not even a pretense of democracy for the nearly 3.5 million Palestinians who live under Israeli occupation in the West Bank and Gaza Strip.

l According to a UN count completed in July 2004, Israel maintains 703 checkpoints and road closures in the West Bank — a territory about the same size as the greater Bay Area. These checkpoints and the apartheid wall, which transforms many Palestinian towns into open air prisons, results in most Palestinian people being cut off from their families, schools, fields, jobs, markets, clinics and hospitals.

l As a result of this destruction and travel restrictions, 85 percent of Palestinians in Gaza and 58 percent in the West Bank now live in poverty, on less than $2 a day.

http://www.sfbayview.com/010505/posterlies010505.shtml
Add Your Comments
Latest Comments
Listed below are the latest comments about this post.
These comments are submitted anonymously by website visitors.
TITLE
AUTHOR
DATE
i always figured
figurererer
“lunatics”
heard it before
Argentina, etc.
Sefarad
Re:
Critical Thinker
"And we could compare The Third Reich with the Soviet Union"
another anti-Zioist attempt to distract us
"Argentina, Bolivia, Ecuador, Bolivia, Mexico, Haiti, Venezuela or Cuba"
Re:
"we could compare with the occupation of Lebanon by Syria."
another Zioist attempt to distract us
human rights
Sefarad
comparing Israel
human rights
irrelevant?
Sefarad
Support Independent Media
We are 100% volunteer and depend on your participation to sustain our efforts!