Add an Event
Newswire
Calendar
Features
Home
Donate
From the Open-Publishing Calendar
From the Open-Publishing Newswire
Indybay Feature
Publish to Newswire
Add an Event
Related Categories: San Francisco | Government & Elections
Come on Barbara… do Whats right - Our democracy is in trouble and we need you to fight!!!!
by tiny/PoorNewsNetwork-POOR Magazine (tiny [at] poormagazine.org)
Tuesday Jan 4th, 2005 1:41 PM
The People demand that their elected representatives really represent them! Hundreds rally at Barbara Boxers office to demand honesty in the election process. 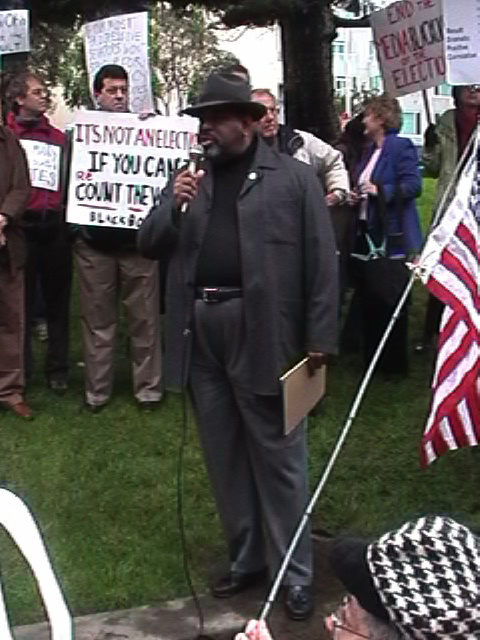 "Senator Boxer is weighing everything- The eyes of Barbara Boxer's chief assistant and Deputy State Director Adrienne Bousian looked down at the glistening cherry wood conference table below her to bring more weight to her rather vague statement, and then repeated it for more impact, "She is weighing everything."

"Can I ask, what would tip the scale in her 'weighing' process?", unable to hold my ever curious mouth closed I, speaking as a frustrated and betrayed citizen of Amerikka and poverty justice/civil rights organizer for several thousand very low, no-income and homeless youth and adult voters who I worked alongside in this last election, piped up the first challenge to Boxer's careful non-statement in a meeting that was held with her assistant to present a stack of signatures from the citizenry of California urging her to challenge the electoral vote. Demanding that she represent the people, not the machine and bring Real democracy back to Congress.

"Well, she said slowly, the calls , letters, faxes and emails of people really are listened to.. so you should all tell your groups to keep those coming, for as you all know Senator Boxer really tries to work for the people…"

"So then we are to assume that these tens of thousands of signatures we have brought to you today will matter..?"

"Yes, of course.." she concluded.. but in my heart I didn't quite believe her affirmation, but that's just me. I was honored to be in Barbara Boxers conference room with some of the most powerful democrats in the Bay Area represented as the delegates of the people including Delores Huerta, long-time civil rights leader and one of the founders of The United Farmworkers Union, Walter Riley, long-time activist and democratic party fundraiser, Max Anderson , Berkeley City Council Member, representatives from Physicians for Social Responsibility, Education without Incarceration, Labor Leaders and at least two very big democratic fundraisers from the south Bay and Marin. Several of these powerful folks related agregious voter abuses that they witnessed first-hand when they were supporting/reporting on the 2004 election in Nevada, Ohio, Florida and New Mexico. We were in her office following a very powerful rally emceed by KPFA's Chris Welch and attended by several hundred folks from across the Bay Area on her lawn all there in solidarity with the work being done in Ohio and Nationwide by researchers, activists, church leaders and old school democrats fed up with these media propagated lies about who really won/stole the 2004 election.

"We want to make a very direct appeal to Boxer to join us in our efforts to restore democracy to this country and get some honesty in the voting process" Max Anderson, Maudele Shireks' replacement in the Berkeley City Council, who along with his fellow council members passed a resolution in Berkeley to investigate voter fraud in the 2004 election spoke at the rally outside before we the delegates marched in"

He continued," We invite Barbara boxer to join a long continuum of people who have struggled from Fannie Lou Hamer to Nelson Mandela to Shirley Chisolm to all those civil rights workers who have fought and died for the right to vote in this country - we need to stand with them - with their spirit, with their legacy. We need Boxer and other senators to step up to the plate and be a part of the tradition for righteous ends in this country - which are constantly undermined by a monopolisitic news media which homoginizes and marginalizes and determines, ultimately, what we hear and what we see and even what we think. I think they are chiefly responsible for the magical thinking we see in this latest election"

Most thinking citizens who are not slaves to corporate media sludge will be happy to hear that Rep. John Conyers (D-MI), ranking Democratic member of the House Judiciary Committee, has taken the lead in Congress to expose and correct the theft of the election. He has committed to contesting the electoral vote of at least Ohio, and may contest other states as well.

He has asked his colleagues in the House and Senate to join him, and many of them are joining. So far 15 senators are considering joining the challenge, including Barbara Boxer and newly elected Senator Barak Obama. While there is a long way to go between senators and congress members challenging electors and the declared winner of the election being changed, pressure is building to the extent that at this moment that outcome appears possible.

"People like Ken Blackwell who sell them selves out to the highest bidders in the republican party to subvert democracy need to be answered and we don't answer them in congress by abdicating our rights to stand up for the people of this country" Max Anderson concluded with the assertion that everything we are demanding as voters are written in the very foundation of this countries constitution, "so we are on firm ground"

As I walked away from the meeting and the rally, I was reminded of my personal power to in fact, like Ms. Bousian said, keep those calls and letters coming in because, unfortunately, if we don't fight for it, we will never own our democracy again.

What can you do? Call or fax senators--including those from other states--and urge them to contest the electoral vote from Ohio, Florida, New Mexico and any other state where there is significant question of the veracity of the election outcome. A number that was posted at the rally is 1-800-839-5276

To read more journalism on issues of poverty and racism by the folks who experience it first-hand go on-line to http://www.poormagazine.org to get more info on the Votergate struggle go to; http://www.miamedia.com/votergate/


http://www.poormagazine.org
Add Your Comments
LATEST COMMENTS ABOUT THIS ARTICLE
Listed below are the latest comments about this post.
These comments are submitted anonymously by website visitors.