Add an Event
Newswire
Calendar
Features
Home
Donate
From the Open-Publishing Calendar
From the Open-Publishing Newswire
Indybay Feature
Related Categories: Central Valley | Anti-War | Legal Support | Police State & Prisons | Front Page
What Have Peace Fresno Members Learned Since the Infiltration
by Mike Rhodes (MikeRhodes [at] Comcast.net)
Tuesday Dec 28th, 2004 9:32 PM
This article updates readers on what has happened to Peace Fresno since they were infiltrated by a member of the Joint Terrorism Task Force. What lessons have been learned? What would they have done differently? What are Peace Fresno’s current projects? 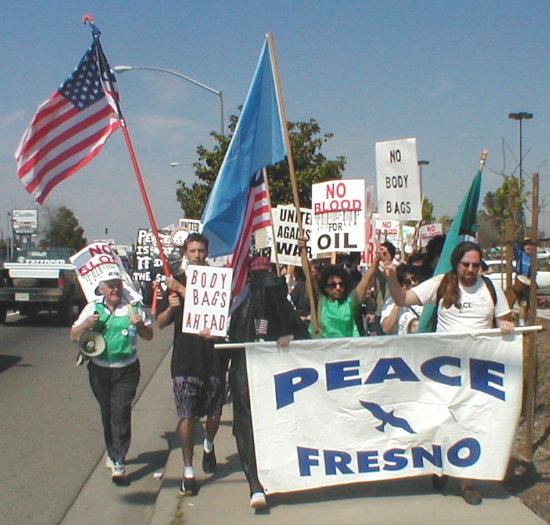 The infiltration of Peace Fresno by the Joint Terrorism Task Force made national news. It was the first documented case, after the passage of the Patriot Act, of spying on a domestic antiwar group. Nick DeGraff, Peace Fresno vice president of publicity and public relations, says that Peace Fresno’s discovery of the Kilner infiltration should have come as no surprise.

DeGraff, a representative of the Northern California ACLU, was a member of a delegation of Fresno community groups that met with Lieutenant Pat Farmer of the Fresno Police Department in March 2003. Farmer told the delegation that it was the intention of local law enforcement to infiltrate local community groups. A week earlier, Fresno police chief Jerry Dyer told a different group that Fresno was a hotbed for terrorism. In this encounter, Dyer said "While Fresno might seem like a quiet little community, that is exactly why it is such a good location to embed terrorist sleeper cells."

The infiltration was not discovered until after the accidental death on August 31, 2003, of Fresno County sheriff’s deputy Aaron Kilner, who was to be identified in his obituary as a member of the Terrorism Task Force. Kilner’s picture, which appeared with the obit, was identified by many Peace Fresno members as the guy who had attended numerous meetings. He was quiet and took a lot of notes.

News of the infiltration, which was featured in Michael Moore’s Fahrenheit 9/11 and Amy Goodman’s Democracy Now! radio show, did not end with the discovery of agent Kilner. DeGraff says that the group has learned valuable lessons from its brush with the law and that this case is far from over. "After a lot of hard work by the ACLU and the press from our case, the California attorney general Bill Lockyer issued a directive to all state of California law enforcement telling them to follow the State Constitution." This is significant, DeGraff explains, "because state law is more protective of our civil liberties than federal guidelines."

Fresno County Sheriff Richard Pierce has never given Peace Fresno an explanation for Kilner’s presence at their meetings. Pierce does not admit or deny that Kilner was investigating Peace Fresno. Peace Fresno attorneys and members who have filed Freedom of Information Act requests to uncover what was happening have run into a wall of silence. DeGraff says that "State Attorney General Lockyer has the resources and ability to not only get to the bottom of this but to make changes." While some Peace Fresno activists are cautiously optimistic that this will happen, others are less confident that the AG’s investigation will result in a full disclosure of what took place.

What is to stop the JTTF or another law enforcement agency from embedding another agent in Peace Fresno? While Peace Fresno activists would probably be suspicious of a single male who nobody knows, who claims to be financially independent, and who takes a lot of notes, that kind of an agent will probably not be sent again. "Our group is much more likely to get to know new members," DeGraff explains. "It is important to be vigilant without being paranoid. You can’t fall into the trap of thinking everyone is an agent. If you do, they win."

Camille Russell, who was the Peace Fresno president at the time of the infiltration, says, "I think Aaron Kilner was working for the Joint Terrorism Task Force under the direction of the Fresno County Sheriff's Department. I believe Peace Fresno was targeted because of its strong, vocal opposition to the wars, to the USA Patriot Act, and to many policies of the Bush administration.

"George Bush's statement after 9/11 that ‘you are either with us or you are against us’ is a comment that reflects this administration's mind set. The peace movement is suspect because it never bought into the climate of fear and repression cultivated by the so-called War on Terrorism, and it is too well informed to believe the lies told by our leaders."

Russell concludes, "Unfortunately, we know little more now than we did at the time of the infiltration because of the very limited responses given by Sheriff Pierce and the FBI to the ACLU, Peace Fresno, and those of us who have asked why we were infiltrated."

Former Peace Fresno president Genie Baranoff says that she believes "Peace Fresno was infiltrated because the Joint Terrorism Task Force needed a target." She says, "It is my impression that the JTTF was instructed to identify action-oriented antiwar organizations and Muslim groups. They did not feel any need for any [basis] other than those two definitions. Even with all the hints that Aaron Kilner was acting as a rogue cop, I still believe he was instructed to attend Peace Fresno meetings. He was sent there on a fishing expedition. If he hadn't died, maybe he might have graduated to trying to instigate violence—though after attending our meetings he had to realize that we weren't oriented that way."

There are several other theories from Peace Fresno members about why the JTTF became interested in their group. No one I talked to believes that the government had any sincere expectation to track down terrorists or learn anything about terrorist activity by attending Peace Fresno meetings. One explanation that was brought up repeatedly is that there is a significant amount of money at stake in doing anti-terrorism work—money that local law enforcement agencies and government entities are fighting over. In order to get the money, you have to have a plausible rationale to justify the allocation of money to this area. Fresno police chief Jerry Dyer’s argument that Fresno is a hotbed of terrorist activity has to have more to back it up than his explanation of "sleeper cells" and a mythical connection between methamphetamine labs and Al-Qaeda. The current president of Peace Fresno, Dan Yaseen, and DeGraff both believe that the infiltration of Peace Fresno was part of local law enforcement’s justification for obtaining federal funding in the war against terrorism.

It is believed by some that the infiltration was a part of a covert operation to disrupt and undermine the antiwar movement. This government operation would be similar to COINTELPRO, the government operation that targeted US organizations for infiltration and disruption in the 1960s and early 1970s. There is evidence to suggest that law enforcement is engaged in this kind of activity, as agents have been identified in other groups when they encourage, or actively engage in, illegal activities. Could this have been what Agent Kilner would have done, as Baranoff suggests, if he had been given more time?

Peace Fresno has not slowed down as a result of the JTTF’s investigation. The group holds a weekly antiwar vigil on Fresno’s busiest streetcorner, has worked to slow down military recruitment of high school students, and has organized numerous peace marches in Fresno. At a march and rally held on March 20, 2004, Ken Hudson, a key Peace Fresno activist and the organization’s secretary, was arrested under unusual circumstances. Hudson had called the sheriff’s department to report that a member of the Free Republic was at the event harassing participants. Hudson first asked the "freeper" to leave and explained that Peace Fresno had a permit to hold the rally. The freeper continued his harassment of event participants and Hudson looked for someone from law enforcement to protect Peace Fresno’s right to assemble peacefully. Local law enforcement almost always has a huge presence at Peace Fresno events. But, for some reason, when the freeper was harassing Peace Fresno activists at this rally, all law enforcement personnel had disappeared. When Hudson called for help, the arriving officers arrested him. The freeper and sheriff’s deputies were later seen talking and laughing about the incident.

After eight months of legal proceedings, the Fresno County District Attorney’s office has agreed to drop the charges, as long as Hudson does not engage in any criminal activity for the next six months.

In coming months, Peace Fresno has plans to hold a major "Rally in the Valley" to protest the ongoing war in Iraq, present a resolution to the Fresno City Council or the County Board of Supervisors to oppose the Patriot Act, and increase their efforts to slow down military recruitment in local high schools.

Peace Fresno president Dan Yaseen says, "We are starting to build a coalition of groups from Bakersfield to Modesto for a ‘Rally in the Valley,’ which will be held on March 19, 2005." The date of the rally corresponds with the anniversary of the US invasion of Iraq. Peace Fresno will use the organizing and coalition building that goes into this event to launch a campaign to pass a resolution condemning the Patriot Act and its attack on our civil liberties. Yaseen says that he "would like to see a resolution before the City Council or the Board of Supervisors in the fall."

Ken Hudson, speaking on KFCF 88.1 FM recently about the military recruitment issue, said, "People need to know about their right to opt out. It is something the school districts, including the Fresno Unified School District (FUSD), are including in their packets at the beginning of the year, but it is easily missed. High school students need to know that they have a right to opt out of having their contact information sent to military recruiters. It is our job to get that word out."

This year, about 8,000 students in the FUSD have returned the form that says they do not want to be contacted by military recruiters. Hudson said that school districts are required, under the No Child Left Behind Act (section 9528), to release the names of students to military recruiters or face the loss of federal funds. Peace Fresno is discussing ways to reach even more students and their parents to inform them of their right to opt out.

Peace Fresno holds public meetings every Tuesday at 7 PM at the Fresno Center for Nonviolence, 1584 N. Van Ness, south of McKinley. For more information go to <www.peacefresno.org> or call them at (559) 487–2515. 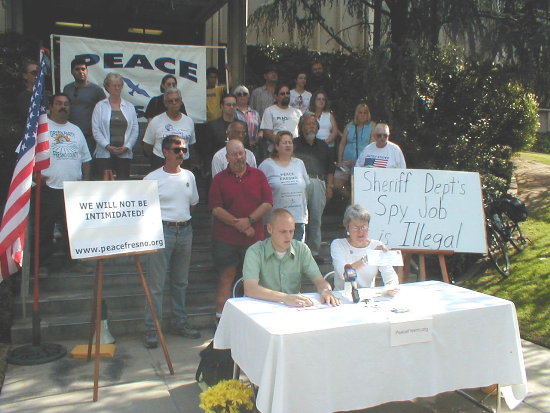 Peace Fresno held this press conference in front of the Fresno County Sheriff’s office. They denounced the infiltration and demanded an end to government spying on peaceful community groups. Seated at the table are Nicholas DeGraff and Camille Russell. 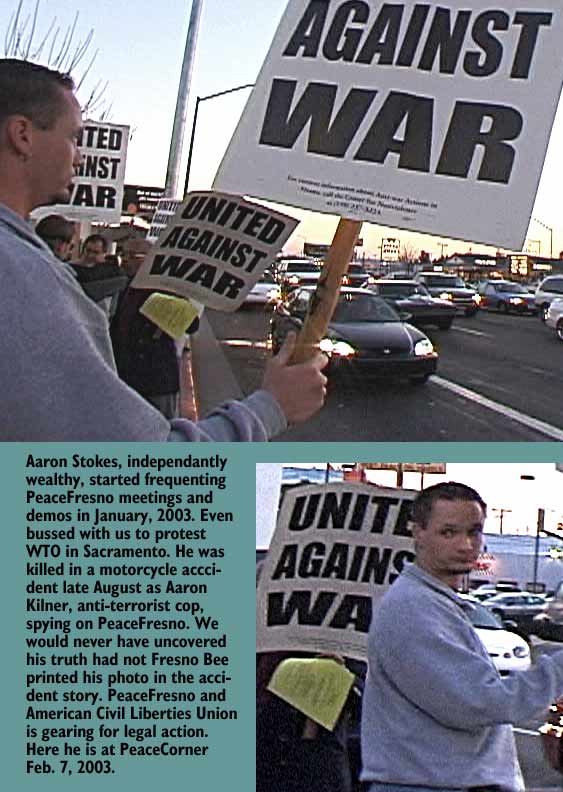 This is a picture of Joint Terrorism Task Force member Aaron Kilner as he protested with Peace Fresno at Shaw and Blackstone. The photos and layout above came from SunMt. See the SunMt video of the spy "discovery" at http://www.indybay.org/uploads/spyclipindysom.mov
http://www.peacefresno.org
§United Against War
by Mike Rhodes (MikeRhodes [at] Comcast.net)
Tuesday Dec 28th, 2004 9:32 PM 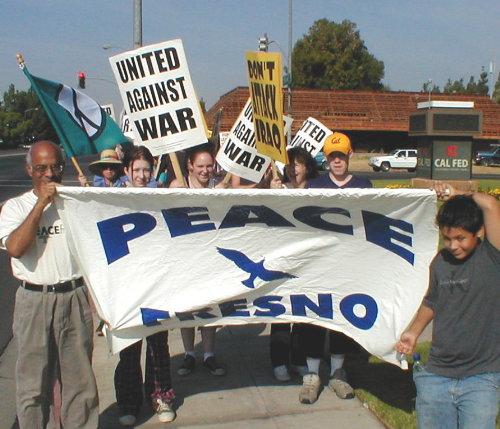 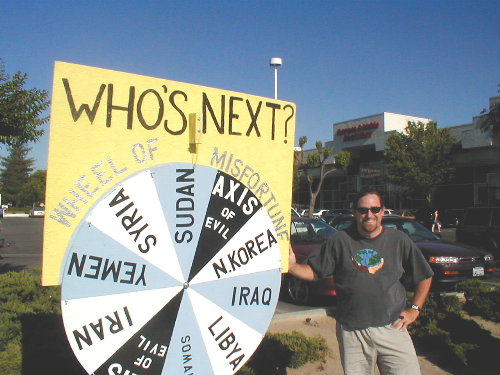 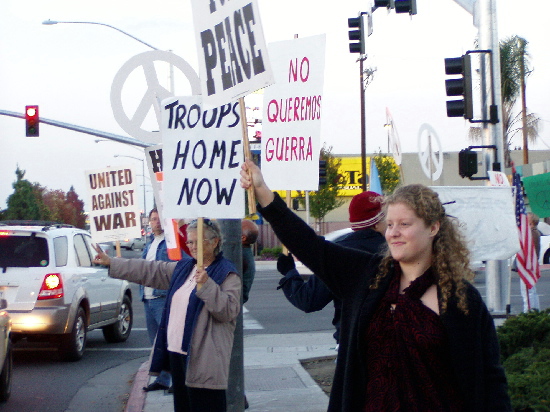 One of the many Peace Fresno rallies at Shaw and Blackstone, probably the busiest street corner in Fresno.
http://www.peacefresno.org
§Jobs not Bombs
by Mike Rhodes (MikeRhodes [at] Comcast.net)
Tuesday Dec 28th, 2004 9:32 PM 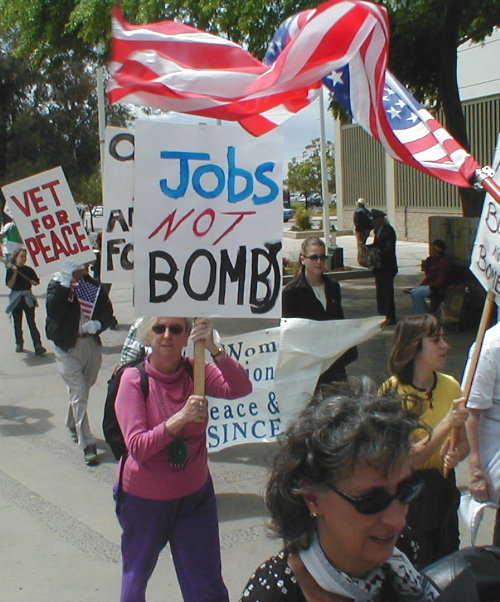 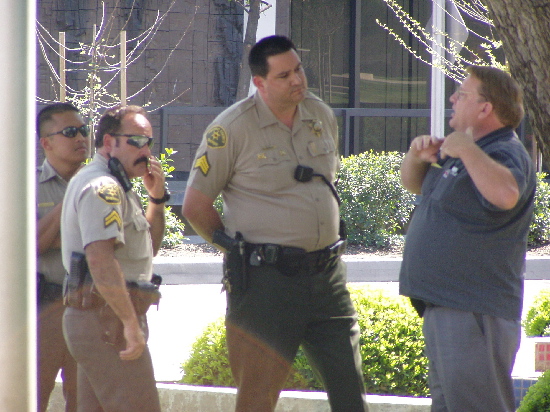 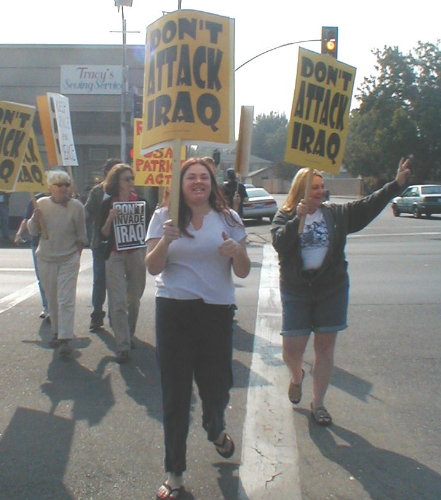 Peace Fresno rally for peace in the Tower District.
http://www.peacefresno.org
Add Your Comments
LATEST COMMENTS ABOUT THIS ARTICLE
Listed below are the latest comments about this post.
These comments are submitted anonymously by website visitors.