At this special, festive time of the year, I thought it most fitting to share my special favorite holiday recipe with the nice net people:

1. Start with a small American pig, (technically, a shoat--the small ones tend to be cockier). Subject him to police terror tactics until he is Hill Street blue.

2. Take one of the (many) foul balls of the Yankees' "sluggers" this year, and paint the outlines of the World on its surface.

3. Shove the ball into the pig's snout until he gags, and then marinade the pig in wine, (or gasoline made from stolen Iraqi oil, but this sometimes blows up).

5. Shove the burning American flag up the pig's ass.

6. Stuff the pig back up the ass of his patriotic sow of a mother.

7.Using the staff of the flag as spit, roast the ensemble over a slow fire for up to six (6) hours. Make certain to twist the spit 90 degrees each time the sow squeals. Also, you must constantly be loudly humming the "Star Spangled Banner" and whistling "Onward Christian Soldiers", simultaneously, throughout the process. (Do this to entertain the pig, so that he doesn't get bored).

8. You'll know when it's done when it has quit raping, stealing, lieing and menacing and killing. (This often takes quite some time.).

As long as the pigs are allowed to maraud in the streets ANYWHERE, 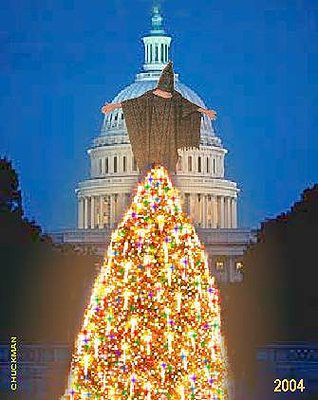 Add Your Comments
§&quot;Take a gander at the kill ratio&quot;
by history buff
Thursday Dec 23rd, 2004 10:40 AM
Take a gander at who won the war.
Add a Comment
§&quot;who won the war&quot;
by GBA
Thursday Dec 23rd, 2004 11:36 AM
"won" is an ambiguous word when it comes to war. Sometimes one side is clearly the vicotr. Sometimes neither side wins. Other times, one side decides it's not really worth the effort after all, and withdraws. That doesn't constitute a loss. Winning is more readily quantified by putting the outcome in terms of lost lives, property, and money. An argument can easily be made that by doing so much damage to the enemy, killing so many Vietnamese, Laotions, Chinese, Cambodian, and North Korean Communist between 1953 and 1975, the United States effectively stalemated and ultimately defeated the growing Communist threat.

Besides, nessie, who's warmongering now?
Add a Comment
§&quot;No war between nations, yada yada&quot;
by GBA
Thursday Dec 23rd, 2004 7:15 PM
What the hell does that mean? Another silly leftist two bit slogan that doesn't mean anything. There have been wars among nations for as long as there have been nations. And there were wars among tribes before that.

Let's look at it this way. Suppose that the communists invaded North America and told the anarchists that once the continent was subdued, the commies would allow the anarchists to establish their own independent state.

Now. Let's say some people in this country that don't particularly like the thought of living in an anarchist society decided they were going to set off car bombs and mortar rounds killing as many commie-collaborating anarchists as they could to disrupt the facilitation of this hypothetical anarchist state.

Then, let's say, someone outside the fray wrote a comment on indymedia to the effect of "The people of North America should be allowed to choose whether they want anarchy or not."

Technically, nessie would have to hide the comment immediately, as by his definition, this comment is warmongering, and no, you are not allowed to do that here.

Who wants to take a vote on whether or not nessie would hide the comment?
Add a Comment
§&quot;That is exactly what is happening in Iraq.&quot;
by GBA
Thursday Dec 23rd, 2004 7:46 PM
How the hell would YOU know what is going on in Iraq? Are you claiming that the majority of people in Iraq do not want democracy, but would prefer to have their benevolent dictator back? You don't know what's going on in Iraq, because you've hardly been outside of that cesspool, San Francisco. You can't even get a small group of so called anarchists in your little collective to see things your way without them getting all pissy and breaking off relations with you. In short, your opinion doesn't mean squat.
Add a Comment
§&quot;All moral people wish them success&quot;
by Sicko
Thursday Dec 23rd, 2004 7:50 PM
They're killing far more of their fellow Iraqis than they are Americans. What does that tell you? That's moral? You're an idiot, nessie.
Add a Comment
§moral is what?
by ybil bhexx
Saturday Dec 25th, 2004 5:57 PM
kill someone in your backyard for abetting massmurder?
shove a frozen poolcue up a dudes ass for threatening your family?

freedom fighters in iraq are only misguided pawns that wish dictatorship over democracy. Cuz bush wills it, they get the latter or else.
Add a Comment
§hmm
by aaron
Saturday Dec 25th, 2004 11:38 PM
In the months immediately after Saddam Hussein (the US' long-time stooge) fell from power the US government laid-out a plan for Iraq which called for a wholesale privatization of the economy, rerouting of oil pipelines and for Iraqi oil to be sold in dollars. The insurgency that has since sprung up with a vengeance has put American plans in severe jeopardy, although portions of the plan have been implemented haltingly.

The "democracy" the US has up its sleeve consists of Iraqi's providing an Iraqi face to American control over the country. Democracy is meaningless when the US occupies Iraq and fundamental questions about control and use of resources and the workings of the Iraqi economy have already been decided.

Although the Bushies cry crocodile tears about the possibility of inter-ethnic/religious war, it is clear exacerbating said divisions serves the US ruling class' plans.

The vast majority of Iraqi's want the US out. Whether or not a vote is held in Iraq, the war will continue.
Add a Comment
Support Independent Media
We are 100% volunteer and depend on your participation to sustain our efforts!