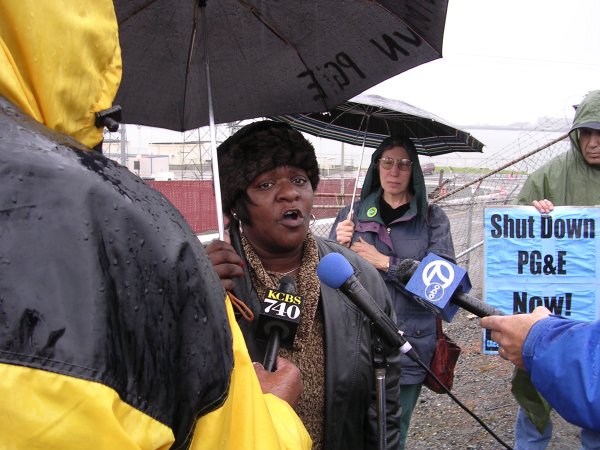 San Francisco, CA – Braving a cold rain, Bayview Hunters Point residents, Greenaction and supporters blockaded the entrance to the PG&E Hunters Point Power Plant for more than two hours today. More than 100 people took part in the protest. Ten protesters linked arms and sat in front of the gate while the rest stood in front of the gate cheering and joining the blockade.

The theme of today’s protest was “If the government won’t, the people will, close the power plant!”

The first of its kind protest was led by neighborhood mothers living directly next to the power plant who are sick and tired of their kids suffering with high rates of asthma and of years of broken promises by politicians to close the plant. Speakers at the rally included Marie Harrison, longtime resident and environmental justice organizer for Greenaction, Tessie Ester, President of the Huntersview Tenants Association, Maurice Campbell from Community First Coalition, Garden Mar, Executive Director of the Chinese Progressive Association, newly elected District 5 Supervisor Ross Mirkarimi, and Willie Radcliff, publisher of the San Francisco Bayview newspaper.
Residents and community groups were shocked and dismayed by the November 8th announcement by Mayor Newsom and the San Francisco Public Utilities Commission that the City had reached an agreement with the California Independent System Operator to allegedly close the PG&E Hunters Point and Mirant Power Plants by 2007, because the deal keeps the PG&E plant open for years longer than originally promised.

Contrary to claims that this deal will close the power plants, the “action plan” pushes back the promised closure date for the PG&E power plant, and contains absolutely no guarantees whatsoever that either the PG&E Hunters Point power plant or Mirant’s Potrero plant will be closed ever. Both companies can apply for new permits and would be allowed to continue operating even if the California ISO removes the “reliability must run contracts.” Even the Mayor admits the plan is based on caveats, assumptions and is facing new delays. 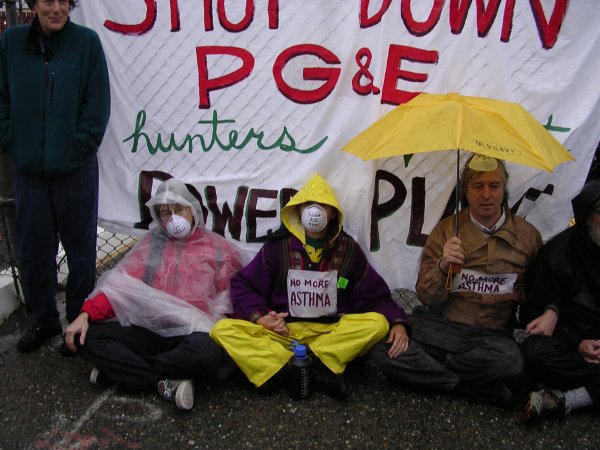 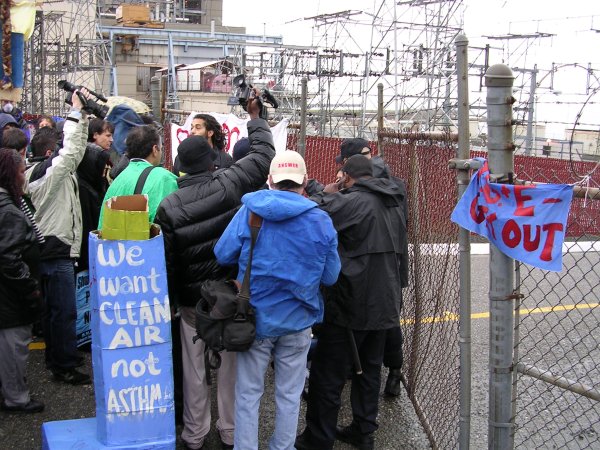 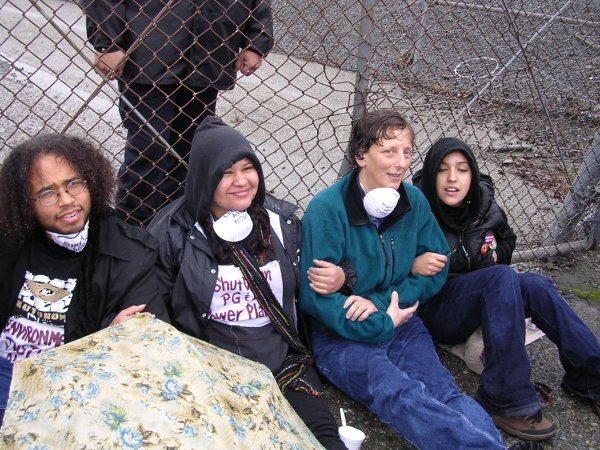 Beyond asthma and respiratory problems from the particulates, CO, NOx etc. from the natural gar combustion (possible petroleum byproduct, geographical source of origin?) there is the cumulative effect of human biofield disruption from the EMF (electro magnetic field) of the high voltage emissions from the PG&E plant..

Human biofield prefers to be on a harmonic plane, rythmic frequency vibrations for optimal human health. Something like a strong EMF current can offset these vibrations and possibly effect the immune system or other longer term body systems..

Redwood (and all) trees conduct biochemically active fluids up and down the trunk on the outer part of the tree. These fluids also emit biofields and are similar to human biofields in prefering to exist on a harmonic plane. So hugging a redwood can actually help human health. Ever notive how our biochemically active artery/veins are on the inside of our arms and closest to the tree when we hug it?

Funny how most of the redwoods around Hunters Point were cut down long ago by early logging barons. The fresh oxygen they provide is also gone from the region. Maxxam/PL's Corporate logging schemes continue the trend of redwood removal further north in Humboldt County..

What kind of life do we want? Why does corporate America subject people to a variety of toxins and simultaneously kill trees that can support humans in a sustainable and symbiotic way?


some ideas about EMF from whale.to site;

The physics and engineering behind electromagnetic disease transmission is truly amazing. Back in 1974, Soviet biologist A.P. Dubrov reported that "all living organisms emit gravitational (electromagnetic) waves." Dubrov recited data from his own experiments with polarizing microscopes (which divide light into its components for easier observation) to support his claim that high-frequency oscillations, or rhythmic movements, of the cell's molecules, can generate biogravitational electromagnetic waves and can propagate (transmit) them over long distances.

Dubrov discovered that photons as well as ultrasonic sound can be observed emanating from cells as they divide. He then made an association between these rhythmic events and biogravitational electromagnetic waves, and proposed that the human brain could coordinate these waves to produce observable effects. Dubrov further suggested that the movement of distant objects, air ionization during mental activity, the 'mysterious' exposure of distant film, organic interaction with time, and the altering of molecular movement occurs through this process. In other words, Dubrov said that human consciousness could coordinate the organism's gravitational electromagnetic waves emitted by dividing cells and thereby produce any number of psi phenomena.

The little known but extremely important work of V.P. Kaznachayev in the former Soviet Union has not been lost on the military establishment either. Kaznachayev took tissue from a chicken embryo and divided it into portions and placed them in isolated metal containers, each of which was equipped with quartz windows that permitted optical contact between the chicken embryo cultures. Containers with plain glass windows were used for the 'control group.'

In experiments with the embryo cultures involving the use of various toxic agents such as a virus, a poisonous chemical, or lethal doses of radiation, the Soviet researchers demonstrated conclusively that a death signal was transmitted from an infected tissue culture to a non-infected culture.

Of all the tissues cultures in containers with the plain glass windows, only the infected cultures died. In the case of those in containers with quartz windows, a 'mirror' effect was observed and cells began to die in the non-infected containers. This mirror effect occurred whether the lethal agent had been a virus, a chemical, or lethal radiation.

When the tissues were given a virus as an infective agent, the cultures began to die within 36 hours. The non-infected tissue began to discolor and die 12 hours later. Measuring devices utilizing photomultiplier tubes proved that "ultraviolet radiation emanated from the diseased tissue, passed through the quartz window, and infected the other tissue."

The Kaznachayev experiments (in the former Soviet Union) show that the dying cells from the infected culture emitted photons in the near ultraviolet wave length that contained artificial (structural) potential. The virtual state, patterned substructures in this photon flux directly represented the cell's specific infection. In other words, as the infected cells died, they emitted 'death photons' which contained the template pattern of their death condition. When these death photons are absorbed into uninfected cells, their deterministic substructures gradually diffuse into the cells' bio-potentials. The bio-potentials of the new cells are charged up with the integrated pattern of the disease. As the bio-potentials of the cells gradually acquire the death photon's substructured pattern, this pattern is also diffused throughout (and modulates) the master cellular control system. All the cells in the sample (or in a biosystem) are now slowly charging up with the death photon pattern.

As irradiation by the death photons continues, the 'death structure' in the irradiated cells increases. It is spread throughout the cell culture by the master communications system, gradually charging the virtual state structure of the system with the death pattern (even though no virus, chemical, or radiation is present).

Mae-Wan Ho "The Rainbow and the Worm"