Add an Event
Newswire
Calendar
Features
Home
Donate
From the Open-Publishing Calendar
From the Open-Publishing Newswire
Indybay Feature
Publish to Newswire
Add an Event
Related Categories: U.S. | Government & Elections
Franklin County Elections Board Targeted Heavily Democratic Precincts
by Tim Lohrentz (plan-act [at] juno.com)
Tuesday Dec 7th, 2004 4:28 AM
The Franklin County, Ohio, Board of Elections practiced widespread voter suppression in the allocation of voting machines on November 2, 2004. In an analysis of official Franklin County data on voting machines per precinct, precincts where machines were added or subtracted from 2000 to 2004, and the party affiliations of the registered voters, Democratic precincts were nearly twice as likely as Republican precincts to have voting machines subtracted from 2000 to 2004. Please see the full text here: 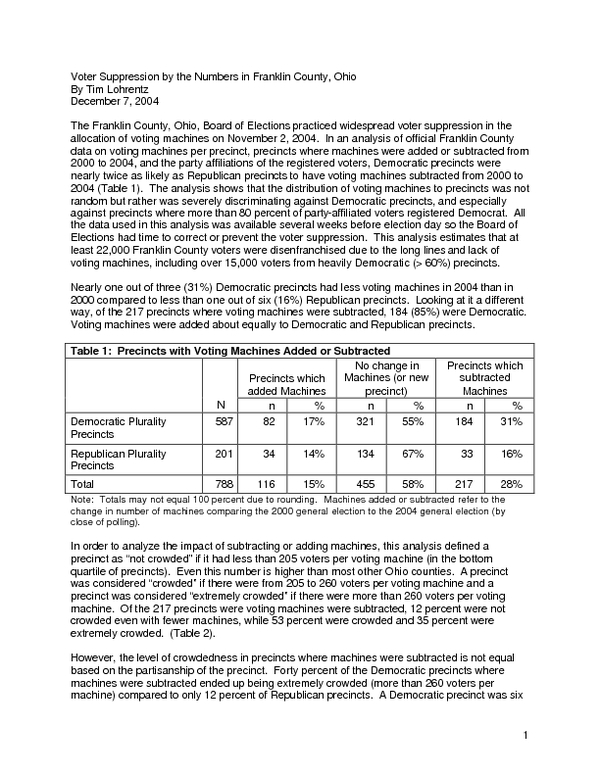 Download PDF (29.6KB)
The analysis shows that the distribution of voting machines to precincts was not random but rather was severely discriminating against Democratic precincts, and especially against precincts where more than 80 percent of party-affiliated voters registered Democrat. All the data used in this analysis was available several weeks before election day so the Board of Elections had time to correct or prevent the voter suppression. This analysis estimates that at least 22,000 Franklin County voters were disenfranchised due to the long lines and lack of voting machines, including over 15,000 voters from heavily Democratic (> 60%) precincts. Please also see http://www.copperas.com/machinery.html for related analysis.

Forty percent of the Democratic precincts where machines were subtracted ended up being extremely crowded (more than 260 voters per machine) compared to only 12 percent of Republican precincts. A Democratic precinct was six times more likely than a Republican precinct to have machines taken away in 2004 and end up being an extremely crowded precinct.

The level of crowdedness did make a difference. Overall, voter turnout (percent voting of active voters) was 12.5 percentiles higher in precincts that were not crowded compared to precincts that were extremely crowded. Using these differences, the analysis calculated an estimate of the number of disenfranchised voters, assuming that each precinct had sufficient voting machines, i.e. was not crowded. All told, over 22,000 voters were likely kept from voting due to long lines at the polling stations. Of these, about 70 percent or over 15,000 were in heavily Democratic precincts. Because Democratic voters are more vulnerable to long lines than Republican voters, an even higher percentage of these 22,000 votes would likely have been cast for the Democratic candidate.

[Tim Lohrentz is a Mathematician and Urban Planner and Senior Program Specialist at National Economic Development & Law Center.
Add Your Comments
Support Independent Media
We are 100% volunteer and depend on your participation to sustain our efforts!