by junya (junya [at] headcity.com)
Each news report on Bernard Kerik, nominee for Secretary Homeland Security, focused on a different aspect of
his background. But when the total story is revealed, the picture becomes quite a bit more disturbing than the fragments suggest. 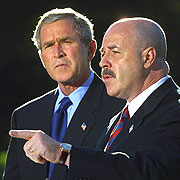 Stop me if you've heard this joke before...It goes like this...

Q. So the White House is looking for someone to head a department with 180,000 employees and a $36 billion budget. They get a resume from someone who's done some work as a bodyguard, 8 years as a low-level cop, 5 years running the local jail and, most recently, aborted his only White House appointment (in utter failure) after only three months. What do they say?

Right. And both Democrats and Republicans sing praise, as the press nods in agreement.

That punchline sounds weak because it's no joke.

I found that each news report on Kerik focused on a different aspect of his background. But when the total story is revealed, the picture becomes quite a bit more disturbing than the fragments suggest:

Kerik seems to be chronically infected with the blurred moral boundaries of an undercover narcotics cop. His career and wealth is based on exploitation of the 9/11 tragedy. And in every management position Kerik has left a legacy of corruption, rising from small-time to big:

Every headline calls Kerik "ex-NYPD head", but he held that position for barely a year. The headlines serve to drive home the message pointed out by a presidential adviser: Kerik "brings 9/11 symbolism into the Cabinet." Translation: Kerik is still milking his 9/11 cash cow.

Kerik's only substantial management experience is as a jailer. And that may be the real reason the White House finds him suitable for Homeland Security's next phase of "protecting the nation".

END_OF_DOCUMENT_TOKEN_TO_BE_REPLACED
Add Your Comments
Comments (Hide Comments)
§Heard the one about the &quot;nanny&quot;?
by junya
Finally - a great punchline: the famous "nanny" copout, made famous by
the Clinton crew of crooks!

One day after a NY Times article revealed that only five years ago
Kerik (now a millionaire) was declared bankrupt, and in the midst of
filling out his "ethics filings" (which would detail his sources of
income and financial liabilities), Kerik realized that even though his
ethics and finances are pure, his good name would be dragged through
the mud by the immigration status of his nanny. To spare Homeland
Security such dishonor, he withdrew his nomination.

And can now keep his finances confidential...

Bye Bernie - we only just met. But your incompetence, thug mentality,
and heart of pure sleaze seemed like a perfect fit. I'm sure this won't
be the last we hear of you...

Add a Comment
§Mr Kerik/Giuliani, 911, Iraq, UN, etc
by Ocram
Some of our Friends "met" Mr. Kerik (and Giuliani) shortly after 9/11, thanks to Victims' Families and Friends, on the WTC issue.

It was enough for them !

And, comp. the prompt, almost pioneer reaction on the recent DHS events
(linking Questions on 9/11 and Iraq/UNHRC De Melo+) :

- You said that "Kerik's top jail aide is under investigation for resale of jail SCRAP METAL that netted hundreds of thousands of dollars that are unaccounted for".

Could you kindly explain what exactly it's all about, cite some facts/names/dates, and/or links ?
Add a Comment
§ Withdrawn printable version - email this article View article without co
by repost
http://www.msnbc.msn.com/id/6697161/site/newsweek/

Bernard Kerik may have a nanny problem. But is that the only reason he’s bowed out of the Homeland Security job?

Dec. 11 - It’s hard to know what was the last straw. Ever since President Bush announced on Dec. 3 that Bernard Kerik was his choice to replace Tom Ridge as Secretary of Homeland Security, official circles in Washington and New York have been buzzing with stories about Kerik’s potential liabilities. A hard-charging former New York City police commissioner, Kerik made many enemies and seemed to be dogged by minor scandals. He was a rags-to-riches story whose climb may have been a little too precipitous; in any case, his tangled personal life caught up with him.

On Friday night, Kerik abruptly informed the White House that we was withdrawing from the nominating process, citing potential problems with the immigration and tax status of a former nanny. “I am convinced that, for personal reasons, moving forward would not be in the best interests of your administration, the Department of Homeland Security or the American people,” Kerik said in a letter to President Bush.

But there may have been other issues at play. Kerik, who recently made millions in the private sector, once filed for personal bankruptcy as a New York cop. And just five years ago he was in financial trouble over a condominium he owned in New Jersey. More serious trouble than anyone realized: NEWSWEEK has discovered that a New Jersey judge in 1998 had issued an arrest warrant as part of a convoluted series of lawsuits relating to unpaid bills on his condo. The magazine faxed documents, including the arrest warrant, over to the White House around 6:00 p.m. Friday, asking for comment. Neither Kerik nor the White House had any immediate response. At 8:30 p.m., Kerik had submitted his letter to the president.

Sources close to Kerik and the White House insist the arrest warrant was not the reason Kerik withdrew. The immediate cause was the nanny problem, the sources say, the same issue that took down Bill Clinton’s nomination of Zoe Baird to be Attorney General in 1993. Kerik explained to the White House that while he was preparing documents for his Senate confirmation hearings, he uncovered information “that now leads me,” he wrote, “to question the immigration status” of someone he had been employing as a housekeeper and nanny. For a period of time, Kerik reported, “required tax payments and related filings had not been made.” According to a Kerik associate, having this kind of nanny problem would have been untenable for the head of the Homeland Security department, which oversees the government's immigration agencies.

The lawsuit relating to Kerik’s apartment stems from his failure to pay maintenance fees. A court found that Kerik owed about $5,000 on the unit. When Kerik failed to comply with a subpoena related to the unpaid bill, a judge on Aug. 24, 1998 issued a warrant for Kerik’s arrest. It is unclear whether the warrant was ever served or withdrawn. Court computer records indicate that the lawsuit remains open, but there was some confusion on Friday over the location of the full record.

Kerik was also coming under close scrutiny for his windfall profit from stock options in Taser International, a company that makes high-voltage stun guns. He netted more than $6 million on the options, without ever having invested any of his own money. Kerik joined the Taser board after leaving his police commissioner’s job in 2002 . New York City was a purchaser of the stun guns, as was the Department of Homeland Security. Kerik sold the stock in early November, shortly before an Amnesty International report charged that there had been more than 70 Taser-related deaths since 2001.

Kerik's biggest booster for the job was former New York City Mayor Rudy Guiliani. Last night, an aide to Guiliani told NEWSWEEK that Kerik had made "the proper judgment" to withdraw.
Add a Comment
§Bye Bye, Bernie
by junya
> + 1 Question to Junya :
>
> - You said that "Kerik's top jail aide is under investigation for resale of jail
> SCRAP METAL that netted hundreds of thousands of dollars that are
> unaccounted for".
>
> Could you kindly explain what exactly it's all about, cite some
> facts/names/dates, and/or links ?

It's from the last source listed in my article:

"In a separate operation now under investigation by prosecutors, Kerik’s top aide reorganized the jail system’s handling of scrap metal, which had previously been turned over to the city for resale. Under Kerik’s watch, an off-the-books operation was set up in which the metal was directly sold to private dealers. Investigators are trying to determine what happened to the proceeds, which amounted to hundreds of thousands of dollars."