by sources
"At this hour of sadness at the passing of President Yasser Arafat,” reads the telegram, “His Holiness Pope John Paul is particularly close to the deceased's family, the Authorities and the Palestinian People. 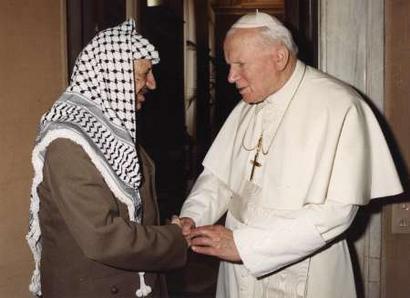 Upon learning of the death of Palestinian leader Yasser Arafat yesterday, Vatican Secretary of State Cardinal Angelo Sodano sent a telegram of condolences in the name of Pope John Paul II to Rawhi Fattuh, president of the Palestinian Legislative Council, expressing the Holy Father’s closeness to the Palestinian people.

"At this hour of sadness at the passing of President Yasser Arafat,” reads the telegram, “His Holiness Pope John Paul is particularly close to the deceased's family, the Authorities and the Palestinian People.

“While entrusting his soul into the hands of the Almighty and Merciful God, the Holy Father prays to the Prince of Peace that the star of harmony will soon shine on the Holy Land and that the two Peoples dwelling therein may live reconciled among themselves as two independent and sovereign.

In another statement, papal spokesman Joaquin Navarro-Valls described Arafar as "a leader of great charisma who loved his people and sought to lead them towards national independence".

"May God welcome in His mercy the soul of the illustrious deceased and give peace to the Holy Land, with two independent and sovereign States, fully reconciled with each other," he said.

Yasser Arafat met Pope John Paul II 12 times between, including a meeting in Bethlehem during the Holy Father’s pilgrimage to the Holy Land in March 2000.

In 1994 the Holy See and the Palestine Liberation Organization (PLO), in order to remain "open channels for continuing the development of mutual relations, understanding and cooperation, gave the “already long-existing and fruitful working contacts a permanent and official character,” and an office of representation for the PLO was opened at the Holy See.

On February 15, 2000, John Paul II and Arafat signed a Basic Agreement between the Holy See and the Palestinian Liberation Organization dealing with certain juridical questions regarding the Church’s activity in Palestinian Authority territory.

Meanwhile Christians in Ramallah were "saddened" by the news. Last night Christians and Muslims gathered in Ramallah for a candlelight vigil to pray for Yasser Arafat. The pastor of the Latin-rite Holy Family Parish, Fr Ibrahim Hijazin, told AsiaNews, "the funeral knell of our church will toll all day for our President".

The Vatican offered its condolences Thursday on the death of Yasser Arafat, calling him a leader of "great charisma" and expressing hope that the time had come for Israel and the Palestinians to live in peace, in two independent states.

Pope John Paul II has long supported Palestinian rights to a homeland and stood by Arafat
...
The Vatican "joins the grief of the Palestinian people over the death of Yasser Arafat," Vatican spokesman Joaquin Navarro-Valls said.

Arafat was "a leader of great charisma who loved his people and sought to guide them toward national independence," Navarro-Valls said.

"May God in his pity receive the soul of (Arafat) and concede peace to the Holy Land with two independent and sovereign states, wholly reconciled," he said.

John Paul received Arafat for the first time in 1982 amid protests from Israel and the worldwide Jewish community. Since that Vatican audience, the two men have met another 10 times.

The pope made his long-sought pilgrimage to the Holy Land in 2000, just a few months before the Palestinian uprising that followed the breakdown in the Camp David peace talks.

In a stop in Bethlehem, the pope kissed a golden bowl of Palestinian soil - one of several gestures the Palestinians saw as recognition of their dreams for statehood. As Arafat looked on, the pontiff proclaimed Palestinians' "natural right to a homeland."

Since their historic first handshake in 1982, Yasser Arafat had a precious ally in Pope John Paul II who has always championed the "natural right" of the Palestinian people to a state.

He found a willing ear at the Vatican from the first pope in history to cross the threshold of a mosque and enter a synagogue.

While the pontiff has strived to maintain a delicate balance in his pronouncements on the Middle East, he has never been afraid of upsetting the Israelis by welcoming Arafat, whom Israel saw as a terrorist.

The welcome mat at the Vatican was rolled out for Arafat 11 times, while Arafat also met John Paul II during a papal visit to the Holy Land in 2000.

Their first meeting was in September 1982, when the Palestine Liberation Organisation (PLO) leader was neither a Nobel Peace Prize laureate nor a president. Things were hotting up in the Middle East. Israel had invaded Lebanon a few months before, and Arafat needed a high-profile ally.

At the time, then Italian prime minister Giovanni Spadolini refused to greet Arafat, but the pope "had no difficulty at all", recalled another former prime minister Giulio Andreotti last week, when the Palestinian leader was on his death bed in Paris.

Arafat, who cannily announced to the pope that he was the second Palestinian leader to enter the Vatican -- after Saint Peter -- remembered the papal welcome as particularly warm.

"They told me I only had five minutes. After seven minutes, a cardinal came in to say that the time was up, but the pope asked him to leave. Our meeting lasted nearly an hour," the Palestinian leader recalled later.

The Holy See followed up that meeting with a statement underlining the "right of the Palestinian people to a state and the right of Israel to security".

In Israel, then prime minister Menachem Begin railed against Arafat's high-profile meeting with the head of the Roman Catholic Church, saying his hands had been "stained with the blood of innocent Jewish children".

Almost two decades later, the pontiff visited Palestinian refugee camps in the West Bank during his visit to the Holy Land in March 2000.

"The Holy See has always recognized the natural right of the Palestinian people to a state, as well as its right to live in peace and tranquility with other people in the region," John Paul II said during his visit.

The last of their encounters at the Vatican took place in October 2001, after Arafat had asked to see the pope to advise him of "the worrying situation" in the Palestinian Occupied territories.

In 2003, the pontiff upset Israel with a strong condemnation of its West Bank security barrier, saying what the Middle East needed was bridges, not walls.

Vatican spokesman Joaquin Navarro-Valls summed up Arafat's contribution to Middle East peace on Thursday, saying he was "a leader of great charisma who loved his people and tried to guide them towards national independence". 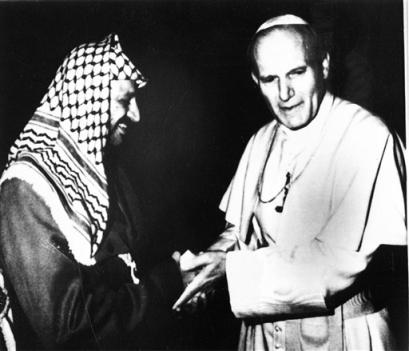 §Papal sympathy to Palestinians on Arafat death
by sources 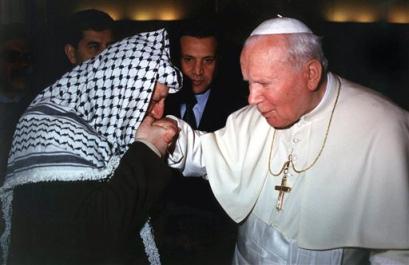 Add Your Comments
Latest Comments
Listed below are the latest comments about this post.
These comments are submitted anonymously by website visitors.
TITLE
AUTHOR
DATE
Vatican praises Arafat for Palestinian vision
more
Support Independent Media
We are 100% volunteer and depend on your participation to sustain our efforts!