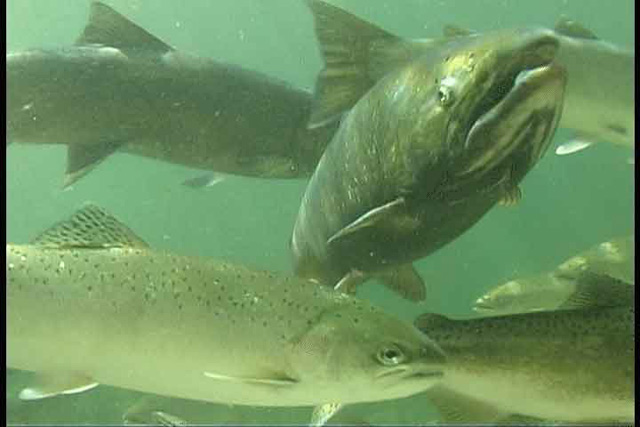 Fish counters on the Klamath have noticed that this year's fall Chinook run seems shockingly low. Nat Pennington who works for the Salmon River Restoration Council, a non- profit that works with tribes and agencies to monitor fish numbers in the Klamath and its tributaries, called California Department of Fish and Game (CDFG) and confirmed his worst fears. So far, preliminary data indicates that this could be the lowest year on record for fall Chinook spawning in the Klamath River and tributaries! CDFG has counts for spawning fall Chinook that go back 26 years to 1978.

These numbers are produced from the Klamath Basin Cooperative Chinook Spawning Surveys, involving Tribes, USFS, CDFG, USFWS, Schools and community groups. The Salmon River, a large tributary to the Klamath, had a previous all time low in 1999 with 780 fall Chinook spawners. This year may be far lower than that, considering cooperative fish counts have only found 57 carcasses three quarters of the way through the counting season. ìIn í99, the lowest year up until this point, there were 70 carcasses at this point in the counting season, so we are probably looking at a total of less than 700 fish this year,î says Petey Brucker, Salmon River Restoration Council, Program Coordinator.

This year the Salmon River also had the fourth lowest Spring Chinook run in 11 years, with only 439 returning fish. The numbers are similarly low in the Scott and Shasta Rivers, and in most of the other spawning habitat in the Klamath basin. According to the CDFG Klamath River Project as of last week the Shasta video weir has recorded less than a thousand Chinook, a mere tenth of the 2001 run. Bogus Creek, just below Irongate Hatchery, has only quarter of last yearís fish. Both are nearing the end of the usual run times.

Regulators are wondering if the run will meet the 35,000 fish natural spawner minimum set by the Magnuson Act, or even worse, if it will be the lowest run on record in the Klamath. This
appears especially bad considering that ocean conditions, which have been favorable over the last three years, are predicted to change soon. Earlier this year the run appeared average. The Yurok tribe commercial harvest in the Klamath estuary caught their quota of 12,698, as did recreational fishers, which were allotted 2,350.

Now it appears that this year's salmon run may have been overestimated and spawning Klamath River Fall Chinook could hit an all time low. Upriver the Karuk Tribe, which is the second largest in the state, only were able to catch 100 fall Chinook for their over 3000 member tribal roll. The Karuk are only allowed to fish with traditional dip nets at Ishi Pishi Falls near Somes Bar. Their harvest this year was hampered by the small run size and low flows in the Klamath.

Residents of the Klamath say they may see some more fish, but they're not getting their hopes up. This is the first year we are seeing the offspring of the 2002 Fish Kill where 64,000 Salmon died in the Klamath and it does not look good, says Salm Stroich of the Mid Klamath Watershed Council. The size of the Klamath Fall Chinook run effects future salmon fishing regulations and commercial quotas from San Francisco to Southern Oregon.

I hope that you can use this. I work for a non-profit community organization called the Salmon River Restoration Council in the rural Siskiyou Co. town of Sawyers Bar Ca. located along the Salmon River. The Council and cooperators including the USFS, USFWS, Karuk and Yurok tribes and CDFG coordinate most of the fisheries monitoring projects in the basin.


We employ 23 community members in the field of restoration and have been a Non Profit since '92. See our web page with streaming underwater footage of Salmon and Steelhead in our river, http://www.srrc.org. The Salmon River enters the Klamath at Somes Bar on the Humbolt Co. line and hosts populations of all the remaining anadromous fish runs still present in the Klamath, including the largest remaining wild population of Spring Chinook, once the dominant run in the Klamath. The Salmon River is also the largest contributor of water to the Klamath River after the Trinity, according to a report by the National Research Council on Threatened and Endangered fish of the Klamath (2003). I have a whole lot of pictures of the Salmon River fish counts coordinated by our group, USFS and CDFG, as well as many underwater photos of Klamath Chinook. You would be welcome to use this or any other Charts or Data that I could E-Mail you or an interview or quote.


p.s. Attached are several pictures I took and a chart from CDFG

Please feel free to contact me if you have questions or need more details.

Quiz:: Which fish are Summer Steelhead and which are Spring Chinook, see any diseases? True or False? over seven runs of Spring Chinook are now extinct in the Klamath Basin. True or False? less than ten percent of the historic Spring Run exists in the Klamath today.
http://www.srrc.org/
§Answer
by Salmon River Restoration Council repost Wednesday Nov 10th, 2004 9:33 PM 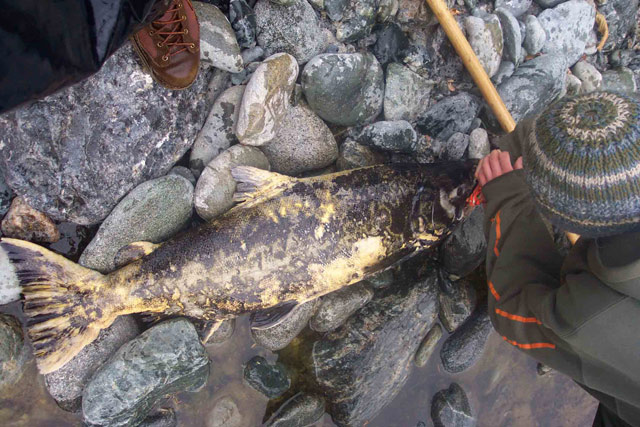 Which fish are Summer Steelhead and which are Spring Chinook, see any diseases? There are 5 Summer Steelhead and 17 Spring Chinook. True or False? over seven runs of Spring Chinook are now extinct in the Klamath Basin, True. True or False? less than ten percent of the historic Spring Run exists in the Klamath today True.
http://www.srrc.org/
Add Your Comments
LATEST COMMENTS ABOUT THIS ARTICLE
Listed below are the latest comments about this post.
These comments are submitted anonymously by website visitors.