Add an Event
Newswire
Calendar
Features
Home
Donate
From the Open-Publishing Calendar
From the Open-Publishing Newswire
Indybay Feature
Publish to Newswire
Add an Event
Related Categories: California | Anti-War
Tanks at Anti-war protest in LA
by .
Tuesday Nov 9th, 2004 10:44 PM
The link for video:
http://www.la.indymedia.org/news/2004/11/118865.php
LOS ANGELES, November 9, 2004 - At 7:50 PM two armored tanks showed up at an anti-war protest in front of the federal building in Westwood. The tanks circled the block twice, the second time parking themselves in the street and directly in front of the area where most of the protesters were gathered. Enraged, some of the people attempted to block the tanks, but police quickly cleared the street. The people continued to protest the presence of the tanks, but after about ten minutes the tanks drove off. It is unclear as to why the tanks were deployed to this location. See the LA-IMC site for video. 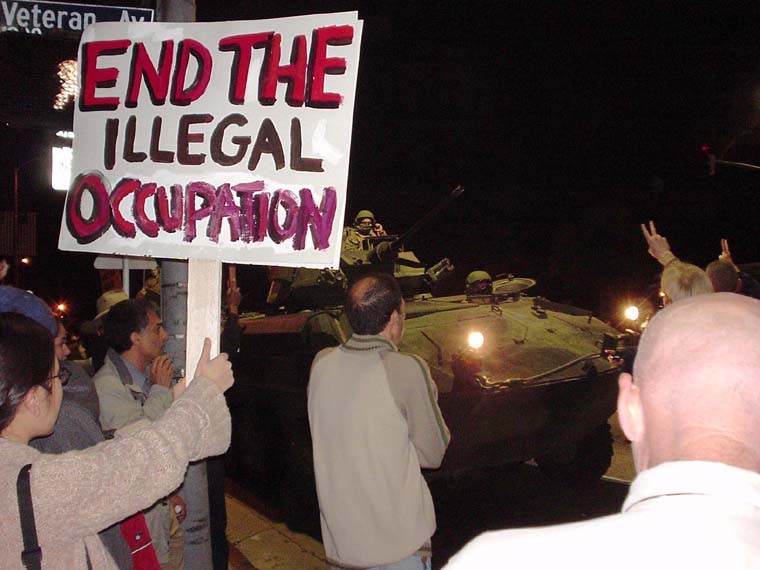 more pics at
http://la.indymedia.org/news/2004/11/118943.php
Add Your Comments
LATEST COMMENTS ABOUT THIS ARTICLE
Listed below are the latest comments about this post.
These comments are submitted anonymously by website visitors.