Add an Event
Newswire
Calendar
Features
Home
Donate
From the Open-Publishing Calendar
From the Open-Publishing Newswire
Indybay Feature
Publish to Newswire
Add an Event
Related Categories: San Francisco | Government & Elections | LGBTI / Queer
Newsom's wife says sex joke has been exaggerated
by sfchronicliar, Matier & Ross
Sunday Oct 31st, 2004 4:37 PM
Mayoral first lady Kimberly Guilfoyle Newsom says way too much is being made of her sexually playful comments at a recent gay rights dinner, and that for the record she was not -- we repeat not -- pantomiming eating a banana when talking about her husband's sexuality. 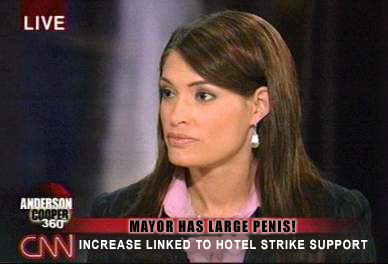 Mayoral first lady Kimberly Guilfoyle Newsom says way too much is being made of her sexually playful comments at a recent gay rights dinner, and that for the record she was not -- we repeat not -- pantomiming eating a banana when talking about her husband's sexuality.

Sure, Guilfoyle Newsom said, she did make a brief reference to her husband's hunky attributes, but the media is confused as to her subsequent gesture.

She was thrusting a pointed fist at herself while making the remarks, while pushing her tongue into her cheek to simulate the bulge a penis might make.

"I was falsely accused,'' Guilfoyle Newsom said from New York.

Guilfoyle Newsom's headline-grabbing remarks and gesture -- which first appeared in the New York Post before they showed up here Wednesday -- had tongues wagging at City Hall all week.

But Guilfoyle Newsom says it's all being overblown.

It started when Guilfoyle Newsom -- a rising TV star in her own right -- stood in for Mayor Gavin Newsom at the Empire State Pride Agenda Foundation gay awards dinner.

Guilfoyle Newsom said there had been many jokes and questions from gays in recent months about whether her "straight white male'' husband -- who made a national splash when he allowed gay marriages in San Francisco -- might himself actually be gay.

A question she chose to answer, with humor, when she took the stage.

According to the Post, Guilfoyle Newsom closed her remarks by joking, "I know that many of you wanted to see my husband, and some of you had questions out there.

At which point, according to the Post's version that we repeated, Guilfoyle Newsom said: "Not unless you can give a better,'' while she mimicked eating a banana.

Guilfoyle Newsom says she was simply trying to add a bit of levity to an otherwise emotion-packed evening, and that her speech drew a half-dozen standing ovations. She insists that not everyone is uptight about sex, and not everyone is missing a sense of humor.

Meanwhile, as for hubby: As State of the City addresses go, Newsom's "REVOLUTION OF SOLUTIONS " speech at Mission High was a tour de force.

Sources tell us Newsom and company went through 13 drafts of the speech before the final cut -- with the mayor himself doing a 20-page rewrite in longhand on the back of draft four.

Even then he took no chances, flanking himself with a pair of TelePrompTers when he took the stage.

As a result, the mayor came across relaxed and in command (even if devoid of the spontaneity or wit of his predecessor, Willie Brown), and more than one attendee remarked later how much he sounded like an emerging Che Guevara.

"My bet,'' quipped one back-row attendee, "he's trying to position himself for a period of massive social unrest and upheaval. He’s an opportunistic guy, and he knows that revolution is in the cards.''

Even the Mission High location had a message: Take political power out of the hands of politicians and deliver it to the people.

Although we must say that with the exception of a black bloc of students, the crowd looked pretty much like a who's who of local radical politics. With more than a bit of blue thrown in.

You see, it seems even with the mayor's recent political realignment, his staff was a touch nervous about his newfound radical allies (including the radical queer group Gay Shame) filling the hall -- so out went the calls, and just about every cop over the rank of captain ended up there.

"Old habits die hard,'' joked one police officer as she took a bathroom break, “Although we’re all fighting the same fight now, we cops still get carried away sometimes, and start swinging clubs at heads. Our bad.”

Gavin Newsom’s political trajectory has been given a warm reception in San Francisco, but like his anatomy, it is viewed with alarm in more traditional political circles across the state.

Mike DeNunzio, Chairman of the S.F. Republican Party, was one of those who likened Newsom to Ernesto Che Guevara.

“I met Che when he was about Gavin’s age. They’re two good-looking, well-endowed young men, with awful politics,” lamented Denunzio. “Gavin’s support for gay marriage just paved the way for his total degeneration. Next it was support of organized labor. Today, he is already talking about revolution. He’s been spotted at Critical Mass and he is rumored to be reading anarchist and communist literature.”

James A. Baker, advisor to San Francisco’s prestigious and powerful Carlyle Group, agreed. “I’m just saying that certain moneyed interests are concerned. This guy can talk all the revolution he wants, but I’d tread lightly if I didn’t want to end up like Che!”

By the way, what is Kim G.N. going to do now that the Scott Peterson trial is over. She has been based in New York, appearing on CNN every day commenting on that trial, and they even came up with a special title like "celebrity justice expert" for her and various other people in this profession on the news. Will she come back to SF?
Add a Comment
§I notice though
by she didn't say she exagerated
Sunday Oct 31st, 2004 5:44 PM
the size of Gavin's wand.
Add a Comment
§here's an indicator from Gavin of
by how long
Sunday Oct 31st, 2004 10:01 PM 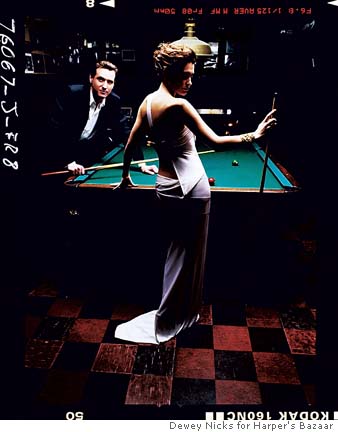 it really is. Even Kimberly can scarcely believe it.
Add a Comment
§I never thought...
by republicans give shitty blow jobs
Monday Nov 1st, 2004 12:59 AM
>James A. Baker, advisor to San Francisco’s prestigious and powerful Carlyle Group, agreed. “I’m just saying that certain moneyed interests are concerned. This guy can talk all the revolution he wants, but I’d tread lightly if I didn’t want to end up like Che!”<

...in a million years I'd be taking anything resembling Gag-me Gavin's side, but if anybody should be watching themselves, it's fools who make threats like this. If I were Gavin, I'd sue this creep just for measure, and to let it be known that this kind of CIA bullshit doesn't go unnoticed.

you think they need the cia to keep track of us?
think again we have had a rat in the house for quite some time
and he is now posting over here. take care what you say.
and who you name.
Add a Comment
§WTF
by ?
Monday Nov 1st, 2004 1:26 AM
Is James Baker making veiled assassination threats?

Add a Comment
§the article above
by is a joke
Monday Nov 1st, 2004 8:54 AM
do you people have a sense of humor at all? well done sfchronicliar!
Add a Comment
§revolution
by anon
Saturday Jul 26th, 2008 11:41 PM
What we need is an american revolution to free us all of the sexual opression that is being pulled over our eyes under the guise of a nonexistent moral highground. Law enforcement needs an overhaul along with the legal system. After we get rid of laws that victimize those who engage in consensual sexual relationships where money is exchanged but without the marriage certificate, then we can start on overhauling the drug war. Maybe then law enforcement will lose the power to arrest ordinary citizens for exercising their rights to choose activities that do not hurt those who insist on enforcing such shortsighted laws.
Add a Comment
Support Independent Media
We are 100% volunteer and depend on your participation to sustain our efforts!