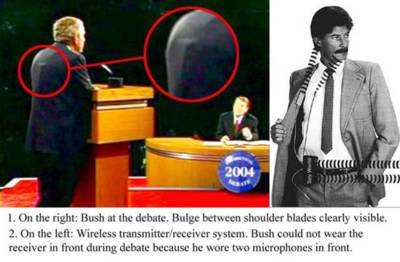 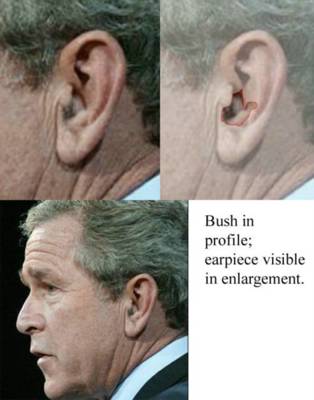 Add Your Comments
§A Coached Pretzel?
by DLi
Friday Oct 8th, 2004 12:12 PM
It did not seem to matter! As was evident after the first "debate," the White House Lying Pretzel still got "clobbered" by his opponent. So Karl Rove is no "genius" after all! Or it could be that, one could lead a Pretzel to a debate, but one cannot turn a mental midget into intellectual heavy even with remote control?

The reason why I think he wears a wire are the way he was speaking during the debate, and more significantly, multiple reports by people who were listening to a Bush speech half a year ago that was broadcast on CNN or similar, and in the audio, one could hear the words Bush was about to speak before he said them in a quiet, but clearly different voice at a different pace. There wasn't just one report of someone claiming this, but apparently there is a tape somewhere. 'isbushwire.com' has more details.
Add a Comment
§Of course, but
by reader
Friday Oct 8th, 2004 2:21 PM
As someone else said, so what?

This Admin is one lie after another. Why on earth would anyone expect Bush would be allowed to speak without a monitor?
Add a Comment
§Re: The Bulge On Bush's Back
by @
Friday Oct 8th, 2004 2:47 PM
The bulge is where Sharon attached the puppet strings.
Add a Comment
§The Hunchback at Notre Damned!
by Christian Rightist
Friday Oct 8th, 2004 5:49 PM
What a Disgrace! This modern-day Hunchback of Notre Damned can't even speak a coherent sentence on the most important debate of his Life, wire or no wire.

I'd fire his whole coaching staff, starting with Rove--the self-proclaimed 'genius' of media spinners. Anyway, wouldn't it easier just to install Slicky Halliburton Dick as the "interim" prez(like what we did to Hamid Karzai in Afghany), and do away with the Nov. election altogether, by claiming that "Sept. 11 changed EVERYTHING!" No more 'electile disfunction' like what we had in Florida back in 2000.

As long as America acts like Imperial Rome(which we are doing, with our foreign legions in over 100 nations across the Planet to protect our 'vital interests') we might as well re-coronate our very own Emperor, and 'Prince of Darkness II' Dickey-burton fits the bill perfectly!
Add a Comment
§Battle of the Bulge
by hey hey, what is W's oil
Friday Oct 8th, 2004 8:58 PM
doing under their sand? What did Bush send in his forces to defend? Not the nukes, oh no.... the OIL MINISTRY.

That bulge is hardlined to OPEC. If Dubbie-boy makes one false move:

The soundbyte, "uh... let me finish..." at the Boston.com website (http://www.boston.com/news/special/politics/debate_video/sept29/5.html)

A few seconds into soundbyte 5, you can see Bush, apparently telling his handler to let him finish! This guy thought he was on a roll!!

You decide.
Add a Comment
§Let me clear this up...
by David Jones
Monday Oct 11th, 2004 1:46 PM
This is silly. It isn't a radio receiver; it's simply his tail, tucked up underneat his shirt. Glad I could clear this up for all!

Add a Comment
§Let Me Finish!!!
by Mark Bradley
(mark [at] scionetics.com) Monday Oct 11th, 2004 7:37 PM
WOW. I'd forgotten about the "Let me finish" line. I just chalked it up to bush cracking under the pressure. But it makes perfect sense.

Add a Comment
§Shameless Liberal
by Rich
Friday Oct 15th, 2004 9:20 PM
Why is 'liberal' a dirty word? Given the definitions, which would you rather be?

Not limited to or by established, traditional, orthodox, or authoritarian attitudes, views, or dogmas; free from bigotry.
Favoring proposals for reform, open to new ideas for progress, and tolerant of the ideas and behavior of others; broad-minded.
Of, relating to, or characteristic of liberalism.
Liberal Of, designating, or characteristic of a political party founded on or associated with principles of social and political liberalism, especially in Great Britain, Canada, and the United States.