Add an Event
Newswire
Calendar
Features
Home
Donate
From the Open-Publishing Calendar
From the Open-Publishing Newswire
Indybay Feature
Publish to Newswire
Add an Event
Related Categories: Haiti | International
Haiti Alert - Illegal Arrest of Political Leaders
by Institute for Justice and Democracy in Haiti (info [at] ijdh.org)
Tuesday Oct 5th, 2004 7:37 AM
On Saturday October 02, 2004, Haitian police forcibly entered Haiti's Radio Caraibe and arrested three former parliamentarians from the Fanmi Lavalas party who had criticized the Interim Government during a radio program. They arrested a fourth former legislator who protested the arrests. The warrantless arrests were illegal and a clear violation of the detainees' freedom of association and of expression. They take place in the context of a wave of police persecution of human rights critics, and verbal attacks on critics by Haiti's Prime Minister. 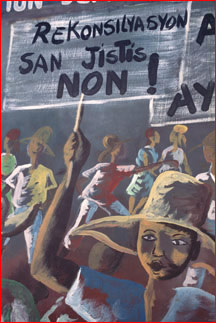 The three arrested for criticizing the government were former Senators Yvon Feuillé and Gerard Gilles, and former Deputy Rudy Hérivaux. The three form the Communications Commission of the Fanmi Lavalas party, and all three are prominent critics of human rights violations carried out by Haiti's Transitional Government. Lawyer Axène Joseph, also a former Deputy, was arrested when he protested the other arrests.

Feuillé, Gilles and Hérivaux had gone to Radio Caraibe to participate on the station's 11AM "Ranmasé" program, along with Evans Paul and Himmler Rébu, both prominent critics of the Lavalas party. The program's subject was violence accompanying recent anti-government demonstrations. Feuillé, Gilles and Hérivaux denounced the violence, and condemned the police for firing on unarmed demonstrators. Before the program ended, heavily armed police officers from the Port-au-Prince police headquarters and specialized units surrounded the station and announced their intention to arrest the three parliamentarians.

Radio Caraibe's Station Manager, Patrick Mossignac, refused to allow the police entry into the station, citing the Haitian Constitution's protection of free speech. Himmler Rébu and Evens Paul remained in the station to protest the police action. A standoff ensued, until just before 6 PM (the Constitution prohibits arrests, even with a warrant, after 6 PM). At that point Judge Gabriel Amboise, a Justice of the Peace, instructed the police to cut the locks and make the arrests. The three Parliamentarians did not resist arrest, and were taken by the police from the Station Manager's office to the Port-au-Prince police holding cells. Lawyer Axène Joseph, also a former Deputy, was arrested earlier in the day when he arrived to protest the other arrests.

Lawyers for the arrestees demanded that Judge Amboise produce a warrant, as required by Haiti's Constitution. The Judge refused, claiming that a verbal order from the Commissaire du Gouvernement (Chief Prosecutor) gave him the authority to make the arrest. He also refused to state the charge against the defendants. Throughout the day, however, government and police sources made announcements purporting to link Feuillé, Gilles and Hérivaux to recent violence. The police also claimed that a car belonging to one of the three contained automatic weapons, but dropped this claim when journalists and human rights observers on the scene insisted that the police, not the parliamentarians, had brought that car.

The October 2 arrests follow a sharp upturn in attacks against critics of the interim government's human rights policies. On September 7, the Inter-American Commission on Human Rights issued a statement expressing concern "over several key areas in which the basic rights and freedoms of Haitians remain weak and imperiled." On September 16, Radio Caraibe aired an interview with Interim Prime Minister Gerard Latortue, in which Latortue complained that human rights criticism was making his relations with donor countries difficult. Later that day police officers raided the offices of the Confederation of Haitian Workers (CTH) labor union and arrested nine union members, all without a warrant. The official justification for the arrest was that the defendants were "close to the Lavalas authorities." Hours later, masked men in military attire attacked the office of the Committee for the Protection of the Rights of the Haitian People (CDPH).

The parliamentarians join many other officials of Haiti's Constitutional government in jail, including former Prime Minister Yvon Neptune and former Minister of the Interior Jocelerme Privert and former Delegate Jacques Mathelier. All are held illegally: neither Prime Minister Neptune nor Minister Privert have ever been brought before the judge who issued their arrest warrant. Mr. Mathelier was brought before a judge, who ordered his liberation on July 12, but prison authorities transferred Mathelier out of that judge's jurisdiction.

On Thursday, police interrupted a legal demonstration commemorating the anniversary of Haiti's September 30, 1991 coup d'etat. Human rights observers accompanying the demonstration reported that police fired on the march, after several attempts to disperse it failed. On the morning of October 1, interim Prime Minister Latortue conceded in a radio interview that the police had shot at protesters and individuals had been killed, and indicated that the authorities would take action against further protests.

Many media reports claim that demonstrators retaliated against the police on September 30, killing three. But before the demonstration started, the police had reported three police officers had been attacked in a firefight with a crime gang early that morning, with one killed and two wounded. The Interim Government claims to have recovered three bodies of decapitated officers, but did not announce their names and the Port-au-Prince morgue had not received the bodies of any of the three as of 4 PM on Friday. Media reports also say that the violence occurred when demonstrators tried to pass before the National Palace. In fact, the unprovoked shooting happened several blocks beyond the Palace, at the Rue des Casernes.

The end of last week saw a sharp increase in warrantless arrests and shootings of Lavalas supporters by police and anti-Lavalas paramilitary groups. IJDH has received reports from all over Port-au-Prince, especially in poor neighborhoods. The cases that we have been able to confirm so far are:

Marguerite Saint-Fils, 35, shot in her home by police from the CIMO unit during the course of an operation in La Saline
.
Accel Savain, age 23 a Lavalas leader. Police searched his home without a warrant, and although they found no illegality, they arrested him after finding a T-shirt supporting President Jean-Bertrand Aristide.


October 1: Wendy Manigat, age 15, shot and killed by police during an operation in Bel-Air

Roland Braneluce, 28, shot by police during a demonstration at Rue Tiremasse.

Lesly Gustave, a member of the National Committee of Reflection of Famni Lavalas, was arrested at approximately 4 PM on October 1, without a warrant. Police are reportedly searching for the remaining members of the committee.

In addition to police persecution, residents of Cite Soleil report that anti-Lavalas armed gangs have been targeting Lavalas supporters over the last few days. Those killed include:

Maxo Casséus, a leader of a grassroots organization in Cite Soleil, killed on September 30.

Piersine Adéma, a resident Soleil 9 in her sixties, killed while sitting in front of her house, reportedly by the same group that killed Maxo Casséus.
http://www.ijdh.org
Add Your Comments
Support Independent Media
We are 100% volunteer and depend on your participation to sustain our efforts!