by Kevin Hall
A stampede of knee-high, blue-eyed elephants has invaded Fresno. Seemingly on the verge of tears, these heart-tugging little darlin's are, of course, the Yes on "Z" campaign yard signs. They're cute. They're everywhere, but are they also trampling the truth? 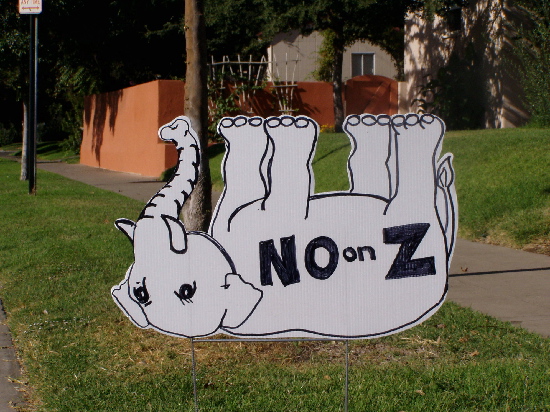 You won’t read it in the Fresno Bee. You won’t see it on the TV news. And you most certainly won’t hear it from the corporate-funded campaign.

The Chaffee Zoo Master Plan shows it all. The shocking map was removed this summer from the Fresno Zoological Society’s website for “revisions,” but it was good enough for Fresno County Supervisors in July when they voted to place the $80 million sales tax and zoo expansion plan on the ballot.

According to the report, the official goal is to “grow the Chaffee zoo into a regional expanded zoo” governed by a private nonprofit corporation. For the next 30 years at a cost of $1 per year the corporation will lease from the city all of the park except for the far western areas of the tennis courts, Storyland, Playland, and Lake Washington.

“The goal of the lease will be to insure the zoo has all the land it needs for future growth into a regional zoo and that it is not at the mercy of future office holders,” states the Strategic Planning section of the April 27 report. “The lease will include two options to renew, each of which will be for 30 years.”

The document lays out specific threats to the park for the next 90 years, such as:

* “The Redevelopment Agency should make Roeding Park and the adjacent area a number one priority. As the Zoo Complex site develops, we believe that private management will explore all the exciting potential this site offers such as inclusion of an aquarium, the Discovery Center, an interactive restaurant, a hotel, expansion and interaction with Storyland and Playland, etc. We also believe private management will fully explore all opportunities of tax increments and related issues which may be available because of the redevelopment designations that pertain to and around this site.”

Eventually, Roeding Park as people know it today would be reduced to a few picnic areas near the tennis courts and Lake Washington.

This plan was crafted by the backers of Measure Z and is clearly understood by, among others, Fresno mayor Alan Autry and the Fresno Bee. Yet until Roeding family members publicly objected in August, and handed out flyers the following month in Roeding Park showing the map, the expansion plans were not publicized.

Now the campaigners regularly understate the threat to the park.

An August 18 Fresno Bee article quotes campaign chairman David McDonald as saying, “The intent of Measure Z is not to grow the zoo, but rather revitalize and restore the zoo.” An editorial opinion piece in that same issue of the Bee stated, “The zoo could increase slightly under some plans—10 to 20 acres—but significant encroachment on Roeding Park is not being proposed by Measure Z.” And in a September 1 letter to Roeding family members, Mayor Autry wrote, “The intent of Measure Z is to restore the zoo, not to substantially grow the zoo. One current estimate is that the zoo would only grow by about 10 acres to a total of approximately 28 acres.”

However, the Zoo Committee report notes, “The Master Plan for the zoo would quadruple the size of the zoo, not double it.”

The Zoo Committee’s expenditure plan reveals a set of priorities at odds with the campaign cries of “Save the zoo!”

If passed, in its first seven years Measure Z will raise an estimated $54 million. The existing 18-acre zoo is slated is to receive only one percent of that money—$600,000—toward the $3 million to $5 million backlog in maintenance work that supporters claim is needed to “save” the zoo.

Instead, the corporation board, unburdened by any government or citizen controls, will award $50 million in new construction contracts to expand the zoo. Some well-connected lender will be paid another $3 million in interest on the construction loans.

Nearly $45 million would be used to transfigure the southeast quadrant of what is now Roeding Park into a “Wild Africa” safari-style exhibit. Another $4 million would be spent to carve a new, exclusive zoo entrance through the park’s northwest corner and pave over another 10–15 acres destined to go from park lands to parking lots.

Moreover, it’s a legal mandate. The zoo authority ordinance passed by the

money go to new construction projects. No more than one-third can go to operations and

Measure Z would last for 10 years and another $30 million would be raised. Older sections of the existing zoo would be razed and replaced, and another chunk of southeast Roeding Park would be taken for an Australian Outback exhibit.

Besides a handful of letters and one guest column in the Bee, the only significant objections thus far to the loss of Roeding Park have come from descendants of Frederick and Marianna Roeding. At the urging of their son, George C. Roeding, a horticulturist and the city’s first park commissioner, the Roedings donated 70 acres for the park in 1903. Five years later they gave another 47 acres and sold the city the remaining 40 acres of today’s 157 acres. The younger Roeding oversaw the park’s design, and he donated and propagated all of the plant material used in the beautifully landscaped, historic park.

“We do not feel our family’s donation, Roeding Park, is the proper location for a large, safari-style zoo,” says Bruce Roeding, a soft-spoken 75-year-old nurseryman from Fremont, California. Roeding is visibly stunned and heartsick at the thought of seeing his family’s creation destroyed and their desire to benefit Fresno residents cast aside.

“We believe the loss of such a substantial portion of Roeding Park’s total land area, as has now been proposed, would be extremely detrimental to the many families who enjoy the park to its capacity on a regular basis without necessarily having the means or the desire to visit the zoo,” says Roeding.

Fresno resident John Holland strongly agrees. He and more than 100 other members of his family recently gathered for their annual reunion in the park on a hot Saturday afternoon in September.

The reunion is an old family tradition and it’s always at Roeding Park, he pointed out. Like other Fresno residents in the park that afternoon, Holland and his relatives were shocked when shown a copy of the Chaffee Zoo Master Plan. They were angry to learn that they were in the middle of a future animal exhibit space.

“The park was made for the people, not the animals,” says Holland. “People come to see each other. I don’t come here to see animals; I come to see people.”

“Roeding,” as most people call it, is the only large-scale park within a reasonable distance of nearly half the urban population of Fresno. The demographics of this large swath of Fresno— mostly poor and working-class people—is evident every weekend. The park fills to capacity with families seeking a beautiful, public place to relax and play.

The loss of such a gathering place would be an environmental injustice of immense magnitude. And who better to commit the crime than a privatized government two steps removed from the accountability of voters or any appeals process.

One of the proudest claims made by Measure Z’s backers is that they will “privatize” the zoo and that taxpayer dollars will “not go to government!” But this is not privatization of the zoo. Privatization means a corporation bids to provide a government service and pays the government agency a share of the profits. Instead, this is taxpayer-funded private government. As described in the Chaffee Zoo Committee report, it’s a “public/private partnership” of “public funding and private management.”

The $80 million would go directly into the hands of the corporation which would control the fate of Roeding Park. The only elected official on its seven-member corporate board would be the Fresno mayor. The other six would be appointed by the County Board of Supervisors. The strategy is to not have this board “at the mercy of future office holders.” And it won’t be.

Among the first actions that can be safely anticipated will be the elimination of union jobs. City workers at the zoo, such as animal keepers, are members of Stationary Engineers Local No. 39. Union representative Marina Magdelano says the union would be opposed to any privatization effort that would cost union jobs. All of the people in non-union positions would lose their health and retirement benefits as city employees, too. All told more than 40 jobs are at risk.

Supporters further threaten that without Measure Z, the Chaffee Zoo will lose its accreditation by the American Zoo and Aquarium Association and that the zoo’s large animals will have to go. They ignore the fact that the U.S. Department of Agriculture is the agency responsible for issuing animal exhibition permits, not the AZA.

The most recent USDA inspection of the zoo in September 2003 resulted in only one citation: an outdoor guinea pig exhibit. As of press-time, repeated requests to review the most recent AZA accreditation report went unanswered by the City of Fresno, which has labeled the report “confidential.”

But local veterinarian Ron Gentzler, who worked at the Chaffee Zoo for 13 years before retiring in 1999, points out that AZA accreditation is not necessary to house large animals. In an August 23 letter to the Bee he writes, “There are 213 zoos in the United States that belong to the AZA, but there are more than 2,000 animal-exhibiting facilities that do not.”

The proposed sales tax needs a two-thirds majority approval to become law. Local political observers maintain that 25 to 30 percent of local voters always oppose a new tax or bond measure. That means only an additional 3 to 8 percent is needed to block Measure Z and stop this injustice.

People who love Roeding Park are determined to save it. A truth campaign is on to inform voters of Measure Z’s real intent and impact. To join the effort, or to sign up to receive e-mail updates and future articles, please visit www.saveroedingpark.com .

END_OF_DOCUMENT_TOKEN_TO_BE_REPLACED
Add Your Comments
Latest Comments
Listed below are the latest comments about this post.
These comments are submitted anonymously by website visitors.
TITLE
AUTHOR
DATE
Rare trees and Palms
Nelson Kirk
Do You Pull Facts Out Of Your Hiney, Or What?
Rick Horowitz
but only after I vote yes on z
you homophobes
Fresno County measure Z is a Trojan Horse
Mike Rhodes
dale and charlie
you are homophobes
Wonderful Park
Charlie
Save the park for what?
dale
Anti-Zoo Scare Tactics
Rick Horowitz
Support Independent Media
We are 100% volunteer and depend on your participation to sustain our efforts!