Add an Event
Newswire
Calendar
Features
Home
Donate
From the Open-Publishing Calendar
From the Open-Publishing Newswire
Indybay Feature
Publish to Newswire
Add an Event
Related Categories: U.S. | Arts + Action | Government & Elections
Repuglican from Texas grossly confused by Reagan Home drama
by telegraph
Monday Sep 20th, 2004 4:42 PM
The Ronald Reagan Home for the Criminally Insane had a really successful week of street theater during the GOP Convention, getting featured in an AP story, the NY Times, CNN, and various other outlets for their straightforward, easy to understand skits in front of Fox News, Halliburton meetings etc. This Republican deliberately acted challenged by it. 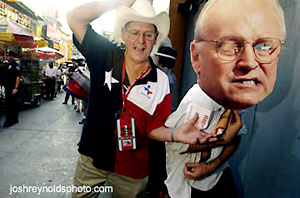 A night out on Broadway for cowboy-hatted delegates from the buckle of the Bible belt on the eve of the Republican convention quickly turned into a tour of Sodom and Gomorrah.
Travel

Fresh from watching a private performance of 42nd Street, the delegates were forced to enjoy some racier entertainment staged for their benefit by demonstrators outside.

"Big Daddy" Bush, Vice-President Dick Cheney and Condoleezza Rice, portrayed by hairy-chested men with masks and prosthetic breasts and cheerleaders with strap-on phallic missiles, were there to welcome their supporters.

"Now, to me, that's a gay thing, a man showing off breasts like that," said Jeff Wilton, from Lacoste, Texas. "I've never seen real New York homos before. Is it safe to use the word 'queer' here?" A touch confused by what had obviously been a drink too many, Mr Wilton was still sure of one thing. "I'm sorry. But to be in the Republican Party you have to be a real man," he told protesters.

Times Square's unfamiliar sights, sounds and smells, among them the odour of burnt kebabs and roasted nuts, clearly looked very alien to the out-of-towners.

"This is not a foreign country. It's the USA," said David Flynn, a member of the Texas legislature and another cowboy hat wearer, trying to convince himself that this was the case. "I wore my hat in London. I see no reason not to wear it here."

The Texans were easy to spot thanks to their headgear. But Republicans from other states were almost as conspicuous. Rarely has Broadway seen so many crew-cutted men in blazers and ramrod stiff postures or ladies in pearl chokers.

The word "Big" did not do them justice either. They had big hair, big bodies, big, tent-like dresses. The inhabitants of Dallas, the television show as much as the city, had decamped to New York en masse. "We are everything. We are rich. We are white and have all the money," one demonstrator, Melissa Simon, taunted the Texans. "We love shutting down farms and building baseball stadiums. Hooray."

"And we love you too," replied Marian Phillips, another Texan Republican.

The real work on Sunday evening was up to the New York police. Snatch squads charged into a mob of protesters refusing to clear the pavement, seizing ringleaders for arrest.

A few hundred yards away a Republican from Virginia sang the praises of the new New York, as compared to the edgier, more dangerous city when he last visited a decade ago.

"You don't get vagrants accosting you and there is an amazing police presence," said Jason Hull.

There may have been one more reason why the Republicans bonded so easily with the police. Only the cops could compare with the visitors for size.
http://www.telegraph.co.uk/news/main.jhtml...
§Breasts - must grope
by telegraph Monday Sep 20th, 2004 4:42 PM 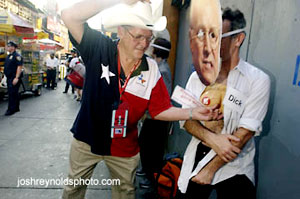 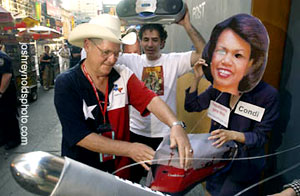 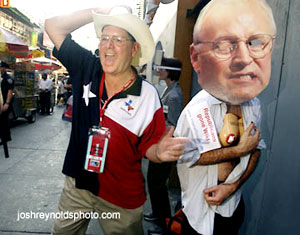 http://www.telegraph.co.uk/news/main.jhtml...
Add Your Comments
Support Independent Media
We are 100% volunteer and depend on your participation to sustain our efforts!