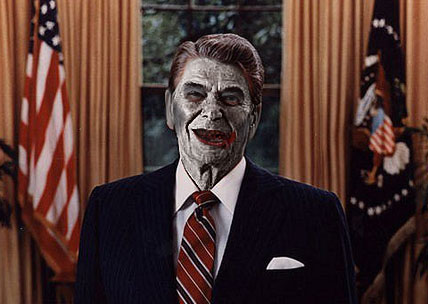 Why is Vice President Cheney being replaced on the ticket with Zombie Reagan?

Vice President Cheney has decided to step down, in order to spend more time with his family.

Additionally, his de-aging process requires that he bathe in the blood of virgins on an increasingly frequent basis. While this has not hampered his ability to perform the duties of his office in any way, it sort of creeps Condi out.

The rumor that the Vice President was moved to an undisclosed location and lost is untrue.
Is Zombie Reagan up to the task?

Yes. The zombification process offers a complete rejuvenation of physical ability, and Zombie Reagan has the constitution of twenty-year-old athlete. In fact, he no longer needs to sleep and can withstand any wound save the complete destruction of his head. By way of example, Zombie Reagan would have been able to shrug off his 1981 assassination attempt and eat his attacker. He and President Bush enjoy clearing brush together.
Can a zombie even hold elective office?

The Constitution offers no specific prohibition against zombies serving their country. In fact, the majority of the Administration is already composed of the undead. It is a little known fact that Secretary of State Colin Powell is the only cabinet-level member that still has a beating heart.

Zombie Reagan, however, cannot become President, because he has already served two terms in that office. If George W. Bush were to die during his second term (say, by being eaten by Zombie Reagan), three options exist: the Speaker of the House would be elevated to the Presidency, Congress would convene to elect a new President or the President would undergo the zombification process and complete his term.
Will Zombie Reagan be the Ronald Reagan that the country remembers so well?

Of course. Zombie Reagan has all the genial charm and old fashioned American optimism that we grew to love in the 1980’s. His appearance has changed slightly and he speaks with markedly different cadences — as is common with zombies — but he is everything he was in life… Except warm! Ha ha!
Will Zombie Reagan require the brains of the living to feast on?

Yes. However, enough Young Republicans have volunteered to donate the ones they aren’t using that this will not be an issue.
Is Zombie Reagan really that much of an advantage? Doesn’t John Kerry have the zombie vote locked up?

No. John Kerry, in fact, isn’t really a zombie. He is more akin to Frankenstein’s Monster, built out of parts stolen from graveyards under cover of night. He simply claims to be a zombie for political advantage.
Are you afraid that Zombie Reagan will draw attention away from President Bush?

No. Both the Administration and the party are confident that George Bush’s eloquence and personal style will not be overshadowed by a lumbering, flesh-eating corpse. Well, mostly confident.
What are some other advantages of adding Zombie Reagan to the ticket?

He will demonstrate America’s resolve to continue the battle against terrorism. Instead of retreating to an undisclosed location following an attack, for instance, Zombie Reagan will be on the front lines, eating illegal combatants. 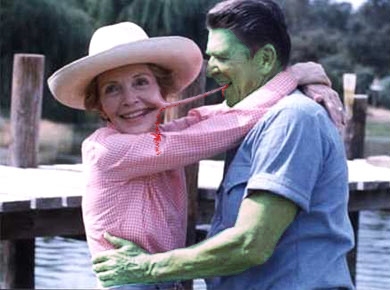 The zombified corpse of Ronald Reagan replacing Dick Cheney on the GOP ticket? Laura Bush reading to the ghosts of Iraqi children? Recent cultural media depicts the conservatives in an occultish light.
http://www.alternet.org/mediaculture/19848/
Add Your Comments
Support Independent Media
We are 100% volunteer and depend on your participation to sustain our efforts!