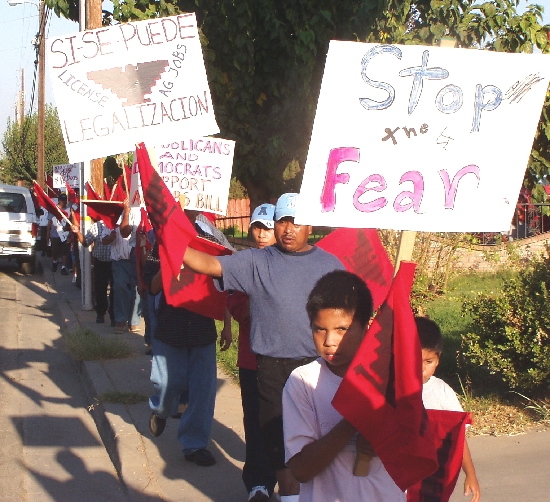 Farmworkers marched in Reedley today to draw attention to problems they are having with the California Highway Patrol. The CHP has been setting up check points on roads frequented by farm workers during the height of harvest season. They are checking to see if the driver has a drivers license. If the driver does not have a license the vehicle is impounded. Fees for retrieving the car from storage often exceeds $500 - one or two weeks salary for the typical farmworker.

The CHP told farmworker representatives today that they were directed to set up the check points by the Labor Commissioner. The purpose of the check points was to inspect farm labor vehicles that are used to transport workers. But, the vehicles used by contractors to transport farmworkers are 10 - 15 passenger vans, not the passenger cars that have been confiscated. Neither the CHP or farmworker representatives could explain the apparent contradiction.

Without a vehicle, farmworkers have no way to get to work. They are forced to ride with contractors who often charge outrageous fees. Many of these contractors not only charge for the ride but force farmworkers, many of whom have no documentation to be in this country, to pay for food, drink, and check cashing. These undocumented workers are often threatened with being turned in to the border patrol if they complain.

The people who harvest the crops in the Central Valley are often undocumented workers who are being exploited by large agribusiness operations. The owners of these "Factories in the Fields" want to keep the workers vulnerable and dependent. This is why the demand for drivers licences for all, without regard to legal status, is such an important issue. Having access to a vehicle and drivers licence is empowering to farmworkers and knowing the laws of the road (which they learn when they get a drivers license) makes the roads safer for all of us. The United Farm Workers union is working hard to pass the national Ag-Jobs bill - S.1645. Legalization will give these workers the dignity and respect they deserve.

This march was organized by farmworkers, many of whom have had their cars confiscated, with assistance from the United Farm Workers union. About 50 farmworkers and their allies started the march from the Meadowbrook apartments in Reedley. They marched through the apartment complex picking up supporters. By the time they reached the Department of Motor Vehicles there were over 100 participants.

A meeting held today between farmworker representatives with State Senator Dean Florez and the CHP resulted in some progress. The CHP agreed not to use the check points to target farmworkers by asking them for their drivers licenses unless there are problems with the vehicle, like a broken taillight. Farmworkers are being reminded to make sure their vehicle will pass an inspection so they don’t give the CHP a reason to ask them for their licenses. The meeting today did not shine any light on why the CHP was targeting passenger vehicles when they were supposed to be inspecting vans. What the meeting did accomplish was to prevent the CHP from continuing to racially profile farm workers by demanding to see their drivers licences without a just cause. 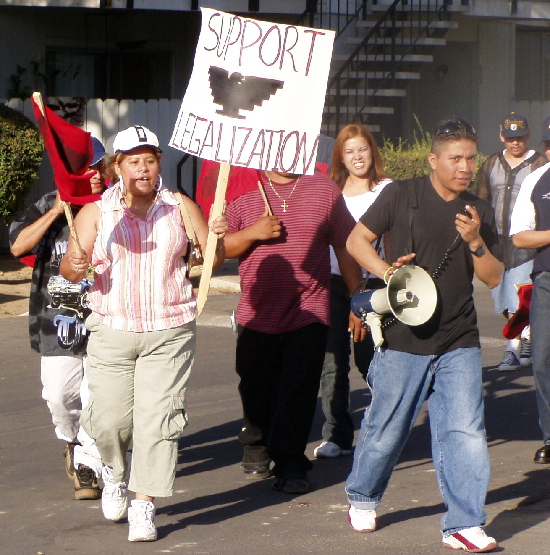 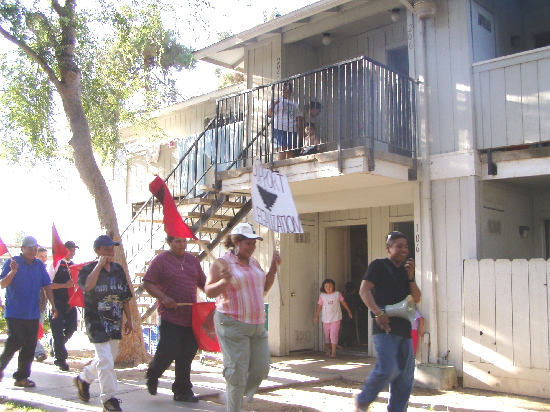 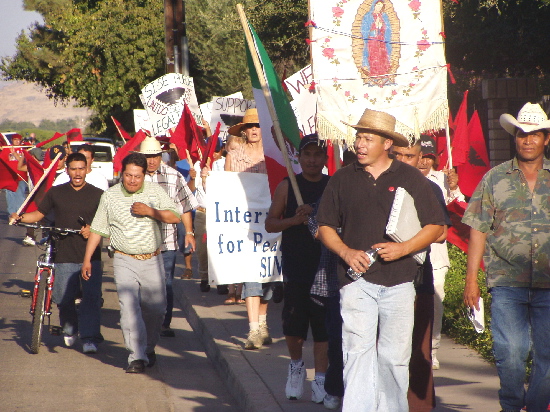 Reedley is about 40 miles Southeast of Fresno
http://www.fresnoalliance.com/home
§The march doubled in size
by Mike Rhodes (MikeRhodes [at] Comcast.net) Friday Sep 10th, 2004 11:45 PM 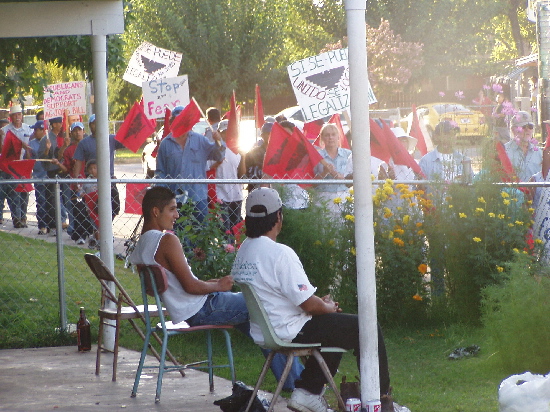 As the march passed houses and apartments, people would stop what they were doing and join.
http://www.fresnoalliance.com/home
§This march was organized by the workers
by Mike Rhodes (MikeRhodes [at] Comcast.net) Friday Sep 10th, 2004 11:45 PM 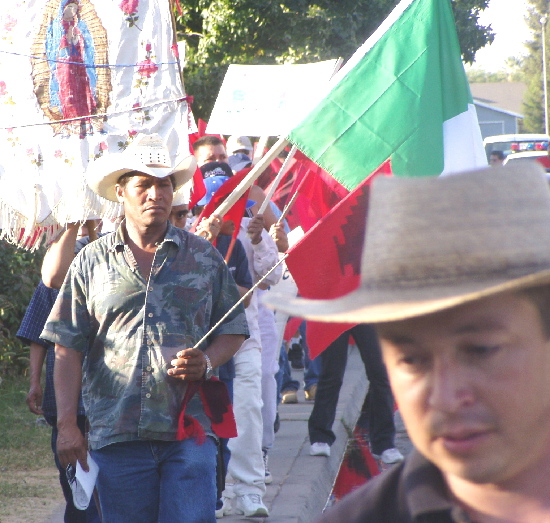 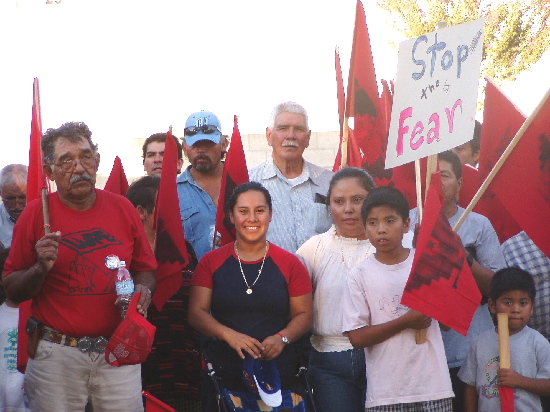 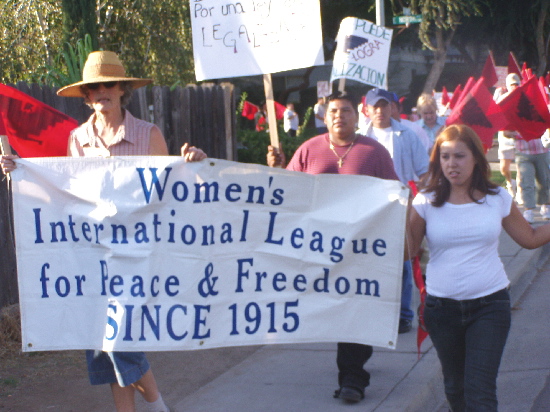 Members of the Reedley Peace Center and Women’s International League for Peace and Freedom joined the march. 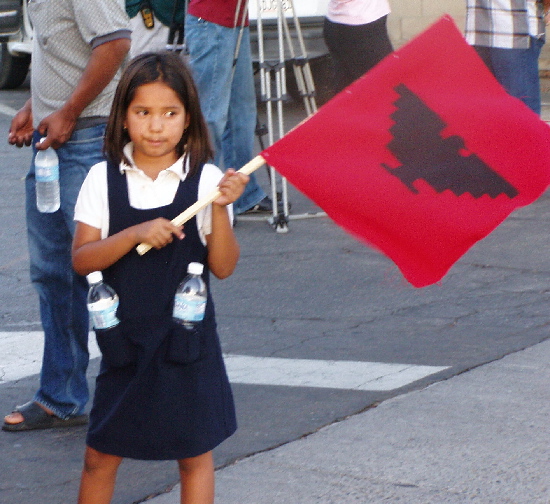 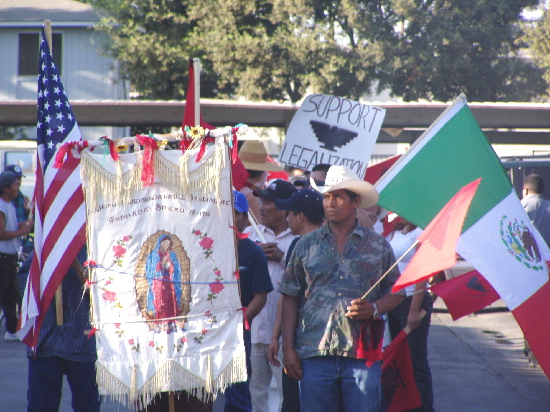