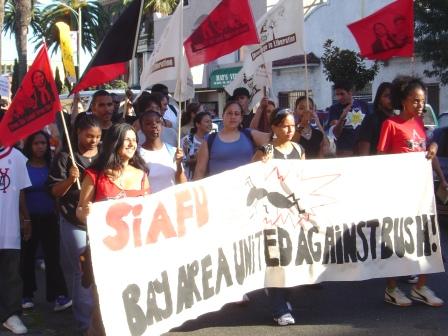 “Not Bush. Not Kerry. Revolution is necessary.” This was one of many lively chants led by African, Filipino, Latino, and other people of color in Oakland on the night George W. Bush claimed the Republican presidential nomination last week.

On Thursday, September 2, approximately 300 people took to the streets of the Fruitvale neighborhood to protest G. W. Bush’s imperialist policies which have harmed communities of color at home and abroad.

The march and rally was organized by the Bay Area arm of Siafu, Bay Area anti-imperialist activists of color and white allies, organized to participate in the mass protest activities at the Republican National Convention.

People of color, women, and working-class people have been at the forefront of revolutionary struggle all over the world. This march demonstrated that they will be at the forefront of change in the U.S. as well. Youth of color, working-class tenants, immigrants, and low and no-wage workers joined activists and organizers in taking to the streets of Fruitvale to raise their voices in unison with many who live and work in the neighborhoods. Members of St. Peters Housing Committee, POWER (People Organized to Win Employment Rights), Youth Together, AYPAL, Just Cause, Mujeres Unidas & Activas, and other organized groups formed strong contingents in the march.

Police stayed away from the peaceful demonstrators and self-organized security kept the marchers safe. Residents and workers came out of homes and businesses to watch, clap, raise fists, and join in as the spirited marchers walked in the hot sun from the BART station to San Antonio Park. The contingent included 83-year old revolutionary Yuri Kochyama who spoke of the struggle ahead as young women of color surrounded her, listening intently.

Fruitvale families joined to listen to speakers at the rally and the group ended the lively evening doing the toi toi, a mass move created by South African freedom fighters who never waivered until they had dismantled the system which oppressed their brothers and sisters. 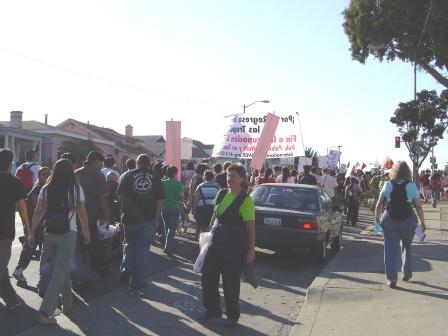 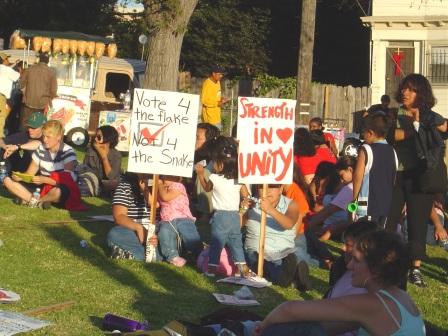 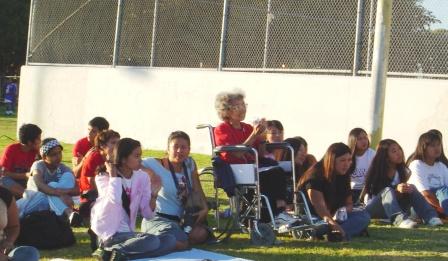 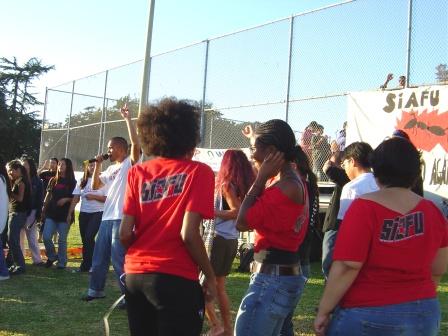