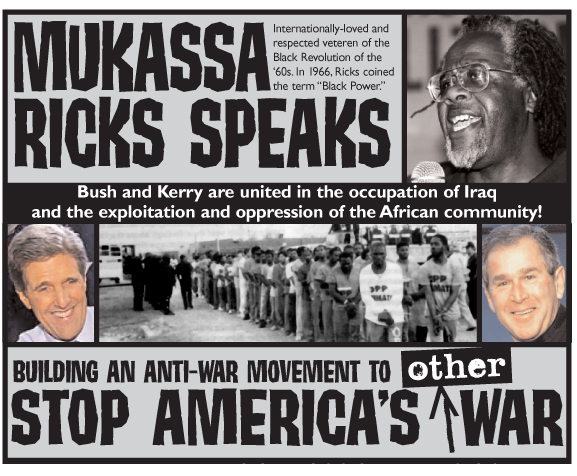 Willie "Mukasa" Ricks is the well-loved leader
from the Student Nonviolent Coordinating Commmittee (SNCC)
who first popularized the slogan "Black Power" - the rallying cry for black community struggles that shook this country to its foundation.

Hear him speak about the glorious Black Power movement
of the 1960's and today's international struggle led by
African people for justice and self-determination.

Tuesday, August 24, 2004, 7 to 9:30pm, "Building an Anti-War
Movement to Stop America's Other War," Fellowship Hall of
Humanity at 390 – 27th St in Oakland. Featuring
Willie Mukasa Ricks, leader in the 1960's Student Nonviolent
Coordinating Committee (SNCC) who coined the term "Black
Power."
This event is sponsored by the African People's Solidarity
Committee (APSC) as part of the work to build the "March for
Social Justice to Stop America's Other War!"
on October 23, 2004 in Oakland, California and other cities.
Call (510) 295-7834 for more info or email uhurureparations [at] yahoo.com

Wednesday, August 25, 2004, 7 to 9pm, "Black Power in the 21st
Century," a discussion about the movement then and now.
Uhuru House, 7911 MacArthur Blvd, Oakland. With Willie Mukasa Ricks, leader in the 1960's Student Nonviolent Coordinating Committee SNCC) who coined the term "Black Power." Sponsored by the International People's Democratic Uhuru Movement. Call (510) 569-9620 or email bakario [at] sbcglobal.net.

If you would like Willie Mukasa Ricks, to speak to your group, please call (510) 295-7834 for more info or email uhurureparations [at] yahoo.com
§Audio Clip (2:16)
by Uhuru Movement (uhurureparations [at] yahoo.com) Sunday Aug 22nd, 2004 11:58 AM
Listen now:
Copy the code below to embed this audio into a web page:
Download Audio (1.0MB) | Embed Audio
Mukassa Ricks recalls defying an injunction passed by President Johnson which attempted to prevent black people from demonstrating.
Add Your Comments
LATEST COMMENTS ABOUT THIS ARTICLE
Listed below are the latest comments about this post.
These comments are submitted anonymously by website visitors.