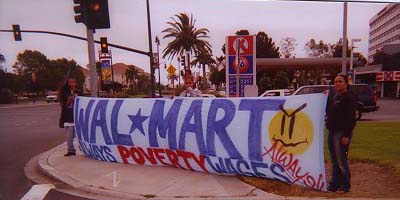 "I don't like it to be here, but for a minute, when they open I will apply for a job" 16 year old East Oakland resident Miguel Coelho pushed his wayward ghetto-fabulous fro' out of his eyes as he spoke to me over the grinding traffic sounds emanating from the nearby Hagenburger road. We were huddled on the tip of the medium strip on Edgewater Road near the Oakland Airport as part of a Rally against the impending development of another Slav-Mart (oh excuse me, Wal-MART) Store

"Can I take your picture for the story," I asked Miguel

"Yea, but I want to take it under this sign; " Government Responsibility and Corporate Accountability……

And so it goes, the frightening paradox of low-income, conscious, intelligent youth like Miguel who although he is Not Down with the 40 million dollar Corporate Welfare deal struck between the City and Port of Oakland and Simeon Commercial Properties that will bring the first Wal-Mart store to Oakland, he needs a job, and Wal-Mart, as the largest employer in the US with 1.4 million workers, always has a lot of low-wage, non-unionized,jobs with no benefits, not to mention, unfair racist, sexist employment practices.

Or consider the case of Oji graduate from The YouthinMedia program at POOR Magazine, who is an extremely talented visual artist, musician and poet but due to his poverty was forced to apply for welfare and then told by his General Assistance (Welfare) caseworker that he must find a job, any job. Lacking many other employment opportunities as an African Descendent youth in the Bay Area, he began working for Slave-Mart, there I go again, I meant, Wal-Mart in West Contra County.

"We're out here today, cause we just found out that the City provided a huge amount of dollars to bring a Wal-Mart into Oakland without any community input, Alicia Schwartz, an organizer with Just Cause Oakland was breakin down the reasons that led Just Cause folks to call this rally, " and we are letting folks know that they have a right to deserve more from Oakland City Government and from these kinds of large corporations especially when they are getting our tax dollars"

The proposed location for this new Oakland Wal-Mart is near the Oakland Airport and will be called The Metroport Development Project, and will include several other large chains like N' and Out Burger and Payless shoes, also known for paying its workers low wages and not giving back to the community.

"In Berkeley large corporations are forced to give back to the community by funding youth apprenticeship programs and job development" Alicia outlined the kinds of give- back programs that Wal-Mart, owned by the Waltons, listed as five of the richest people in the world and #1 contributors to The Republican Party could do in the very poor county of Oakland. She concluded, " Our schools need money, our communities need money"

"Wal-Mart believes that paying women a living wage leads to broken single-parent headed families" Ben from The Oakland Coalition of Congregations (OCC) was one of the several community youth and adult leaders that spoke at the rally on the bizarre draconian worker practices of Wal-Mart. His disclosure about Wal-Marts old-school Euro-Centric sexist beliefs reminded me of the whole GW Bush-Jerry Falwell concept of what is a "healthy family" i.e., the way for welfare moms to become economically stable is to get married, no matter who they marry, similar to the welfare/Wal-Mart mandate of a job, any job.

"In this year alone, over 300 immigrant workers were arrested and deported from their jobs, while hundreds more were laid off from their jobs" An organizer from Immigrant Workers Freedom Ride spoke about the flagrantly racist tactics of Wal-Mart, "As well, Wal-Mart pays a very low wage to its workers and gives no benefits," He concluded with a chant that the crowd of over 50 community members, workers and organizers joined in on, "Wal-Mart you are not Welcome here!"

"So we already know that Wal-Mart is shady, that they are unfair to Black people and females, and we know that Wal-Mart has the money to pay its workers more considering that it just received a multi-million dollar payoff to come here", Theresa, a young African Descendent woman was summing up the goals of the community at this rally, "So what I want is a job with a living wage so I can support my family, career development and education and what I want is for Wal-Mart and Simeon development to create a fair partnership with the community so that we can all live while Wal-Mart is here."

For more information on the effort to demand a fair partnership from the developers and elected officials call Just Cause at (510) 763-5877. To read more resistance to unfair labor practices and unfair businesses by the low-income workers themselves go on-line to http://www.poormagazine.org and click on Labor and Unrecognized work

http://www.poormagazine.org
Add Your Comments
LATEST COMMENTS ABOUT THIS ARTICLE
Listed below are the latest comments about this post.
These comments are submitted anonymously by website visitors.