by Z
Near the end of today's proPalestine protest in SF, an activist from QUIT told me that a man from Blue Star PR had been yelling at her and calling her a bitch and saying that she should die. I went over and got these pictures of Dan Kliman yelling at her. I didnt hear his exact threat (perhaps someone who was there can provide more details) but I did get some video of him yelling in people's faces and accusing QUIT (Queers Undermining Israeli Terrorism) of being suicide bombers for opposing the occupation and the wall. 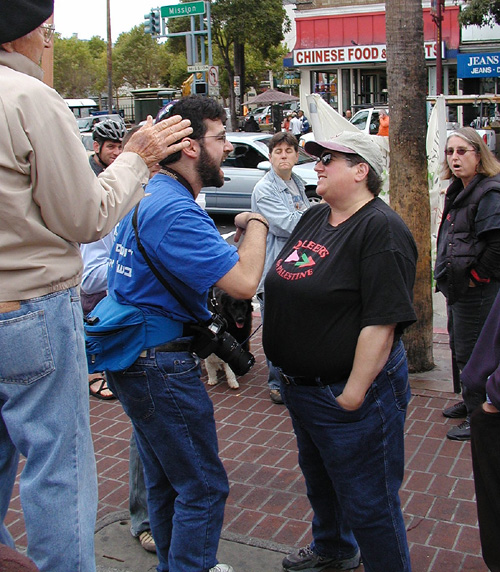 I'm not sure if Dan works for Blue Star PR ( http://www.bluestarpr.com/ ) but it is the company behind all those ads for Israel around town. Blue Star PR had signs online that proIsrael people brought to the counter protest today. Blue Star PR is partly funded by the Richard and Rhoda Goldman Fund who gave its San Franicisco branch $450,000 over the past two years ( see http://www.goldmanfund.org/pdf/Counter_AR2003.phpx )
§Dan Kliman
by Z 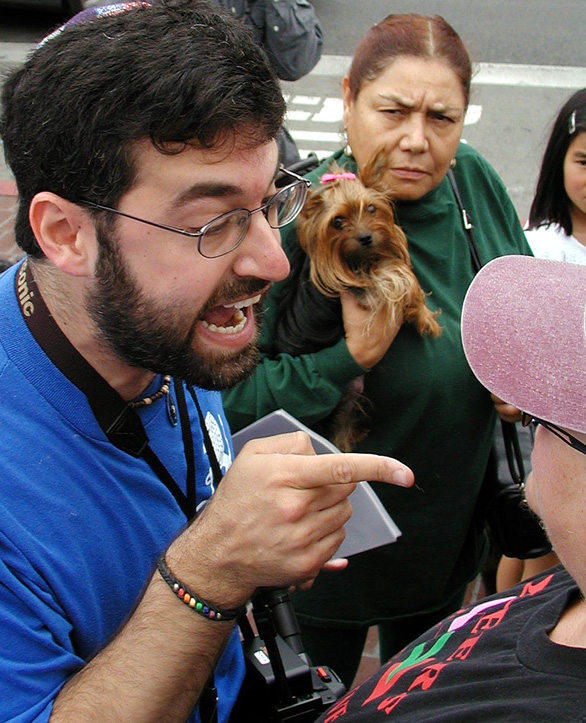 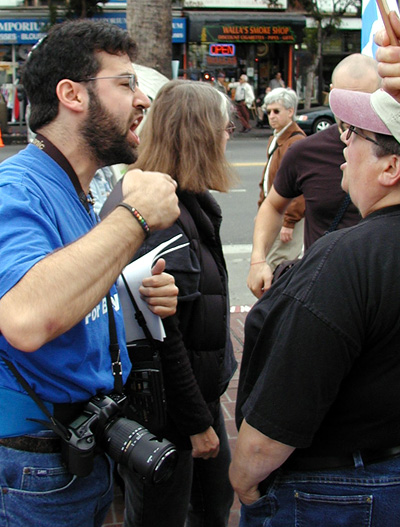 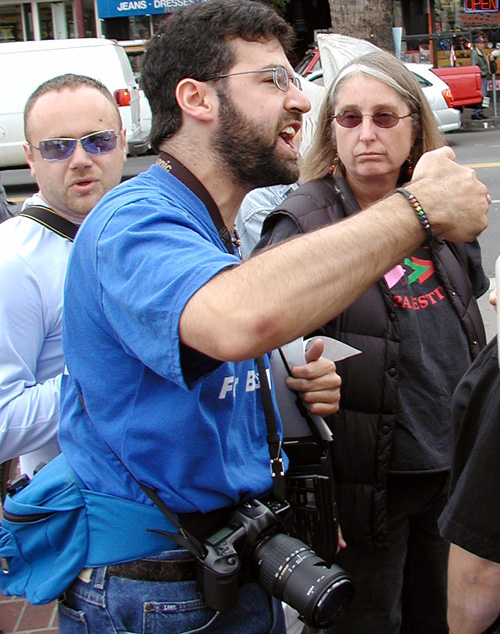 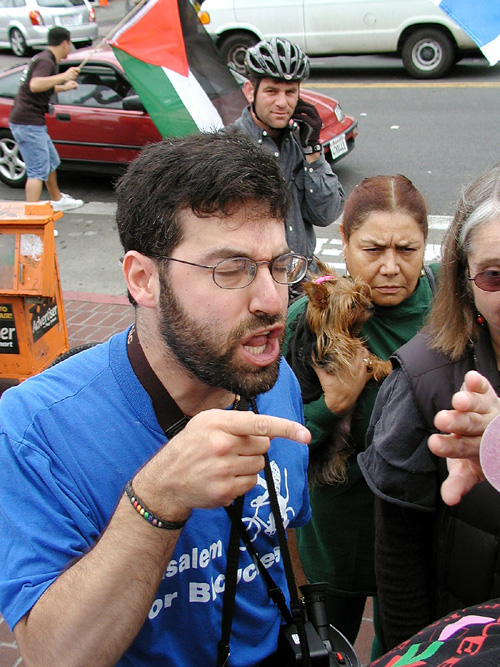 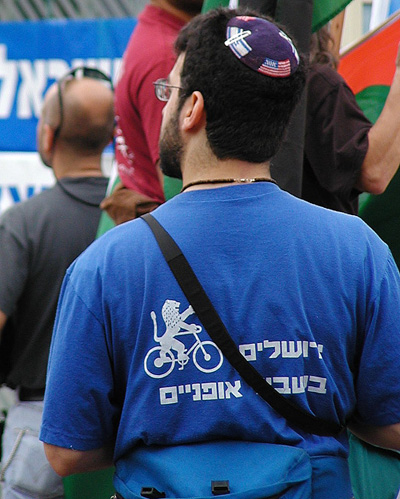 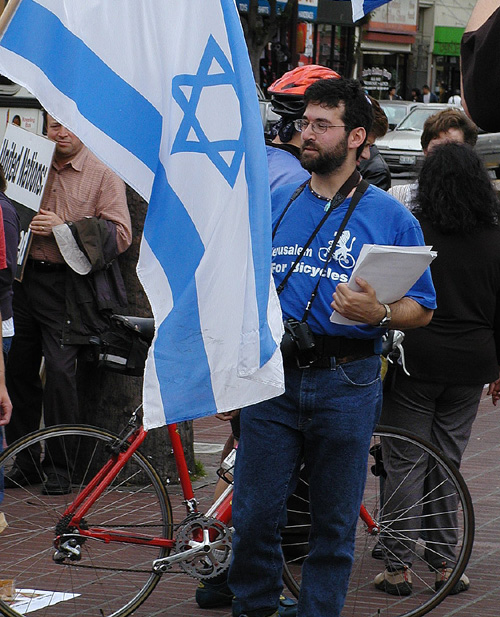 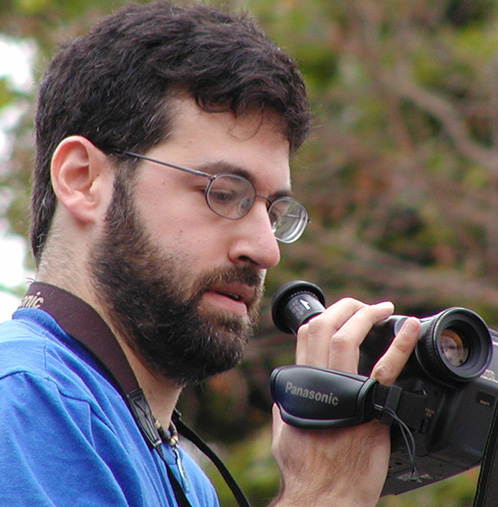 Dan had a still camera and video camera and was filming people for most of the protest. While most people taking pictures just put them on their websites and it amounts to little, Dan has in the past tried to mobilize people to call the FBI on Palestinian activists.
http://www.indybay.org/news/2003/09/1647068.php
§video
by Z
Copy the code below to embed this movie into a web page:
Download Video (1.7MB) | Embed Video
My camera also does video.This may be useful for legal reasons If Dan attacks or threatens someone at a future protest.
(thats to whoever reposted it smaller)
§another pic
by background 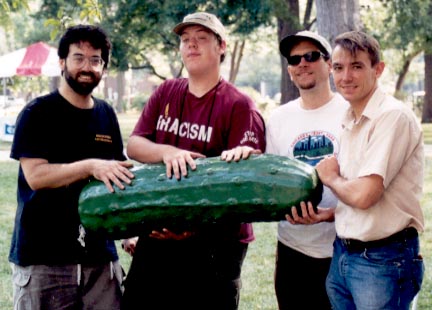 From what you can find on Google, Oakland internal medicine physician Dr. Daniel Kliman (see picture at bottom of http://www.geocities.com/cweminyan/Members/Organizers.html ) seems progressive on a bunch of different issues. He's gay , hates cars and is a member of at least one vegetarian activist group. Its scary to think that someone you might work with on one issue can be so conservative on another that they actually tried to get the FBI to arrest people for protesting. Its especially sad since it seems like his father (who passed away a few months ago) saw his proudest achievement as "bringing together members of the local Muslim and Jewish communities for mutual dialogue" ( http://www.legacy.com/timesunion-albany/LegacySubPage2.asp?Page=LifeStory&PersonID=1863638 ).
§people change
by people change 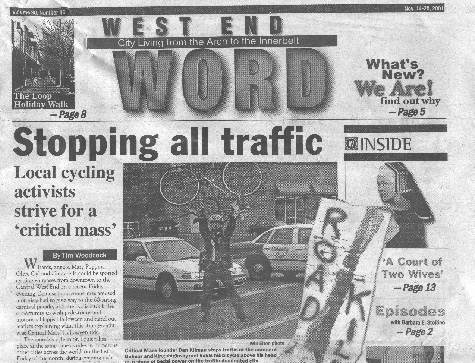 "Critical Mass founder Dan Kliman stops traffic at the corner of Delmar and Kingshighway and hold his bicycle above his head as a show of pedal power on the traffic-dominated city streets. "
http://www.stlcriticalmass.org/media/west_end_word.htm
Add Your Comments
Latest Comments
Listed below are the latest comments about this post.
These comments are submitted anonymously by website visitors.
TITLE
AUTHOR
DATE
kliman was a nutcase
pro peace
Body found in S.F. elevator shaft, a week later
sad
Has it?
??
assaulted by dan
old lady
Nurse
Mary Varalli
compromise
cp
such unresolved anger
such rhetoric
hang it up, guys
gehrig
Ernst Rohm was gay, too.
Smash racists, smash racism
Wendy's Racism
GENUINE anti-racist
Support Independent Media
We are 100% volunteer and depend on your participation to sustain our efforts!