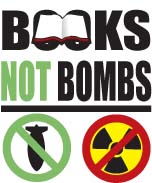 1 PM Rally: followed by an Action and March to the Livermore nuclear weapons lab.

On the 59th anniversary of the U.S. atomic bombings of the Japanese cities Hiroshima and Nagasaki, we will gather at Livermore Nuclear Weapons Lab. Livermore is one of the primary facilities for nuclear weapons development in the world and has long been a site of non-violent resistance to nuclear weapons.

This year, $28 million is requested to develop the Robust Nuclear Earth Penetrator at Livermore and Los Alamos labs. Yet, two schools will close in Livermore in order to save $1 million. All over California teachers are laid off and educational programs are being cut while $6.6 billion is requested for nuclear weapons work - more than during the Cold War!

*The Abolition of All Nuclear Weapons

Recently, everywhere you look school budgets are cut, libraries closed and social programs gutted -- yet, against a major deficit and budget crunch funding for nuclear weapons continues to rise. For example, in the San Francisco bay area city of Livermore two schools will close, while at the same time funding for nuclear weapons increases at the nearby Livermore Nuclear Weapons Lab!

On August 8, 2004, to mark the 59th anniversary of the U.S. atomic bombings of the Japanese cities Hiroshima and Nagasaki, there will be a major rally in Livermore demanding "Books not Bombs". The action, at one of the primary facilities for nuclear weapons in the world, will be part of an international series of actions from August 6-12 that oppose U.S. nuclear policy and demand the abolition of nuclear weapons.

Livermore Nuclear Weapons Lab has long been a site of non-violent resistance to nuclear weapons which have become the ultimate symbol and enforcement mechanism for U.S. Empire. A nuclear armed nation rules by threat of annihilation. The U.S. has brandished its nuclear arms fire power for decades while simultaneously demanding that other nations disarm. Billions of dollars have been, and continue to be spent by the U.S. in the invasion of Iraq, shrouded by claims that we sought to eliminate hidden weapons of mass destruction.

WMD's were not found in Iraq.

Currently at Livermore Lab, for design work on the Robust Nuclear Earth Penetrator, (a "bunker busting" bomb) 28 million dollars has been requested in FY 2005. If designed and built this bomb could burrow into the ground and could inevitably disperse radioactive dirt and debris over several square miles of the surrounding environment.

In addition to the development of new and modified nuclear weapons, a major ramp up of WMD activities is proposed at Livermore Lab. In essence, their ten year plan, if unchanged will create the infrastructure for a whole new generation of nuclear weapons. This plan, coupled with the broader "U.S. Nuclear Posture Review" could increase our nation's capacity to manufacture an extensive arsenal of advanced, new weapons. To this end, a highly criticized proposal released by the Department of Energy reveals plans to double the limit for plutonium stored on the Livermore site to 3,300 pounds (enough for at least 300 nuclear bombs) and create new technologies to manufacture plutonium pits, the core of a nuclear bomb.

Stopping the infrastructure that enables the creation of new and modified nuclear weapons in Livermore is essential to prevent rampant global proliferation!

Join with thousands around the world to say "NO" to nuclear weapons and U.S. nuclear policy. The "Books Not Bombs" rally will be on Sunday, August 8 at 1 PM at Jackson Elementary School in Livermore, Ca. The rally will be followed by an action and march to Livermore nuclear weapons lab. This year we are demanding: - the abolition of nuclear weapons - the demilitarization of education - an end to a war economy which funds bombs over school books for our children.

Please join us for a Rally and March to the Livermore Nuclear Weapons Lab!

On the 59th anniversary of the U.S. atomic bombings of the Japanese cities Hiroshima and Nagasaki, we will gather at Livermore Nuclear Weapons Lab.

This year, $28 million is requested to develop the Robust Nuclear Earth Penetrator at Livermore and Los Alamos labs. Yet, two schools will close in Livermore in order to save $1 million. All over California teachers are laid off and educational programs are being cut while $6.6 billion is requested for nuclear weapons work - more than during the Cold War! An analysis of the U.S. nuclear weapons budget can be downloaded at: http://www.trivalleycares.org/FY2005_Nuclear_Weapons_Budget_Request.pdf

*The Abolition of All Nuclear Weapons!* Nuclear weapons are the ultimate weapon of terror and their elimination begins with our opposition to them right here in the San Francisco Bay Area! In 2004 the Mayors of Hiroshima and Nagasaki and Abolition 2000 have launched a worldwide emergency campaign to abolish nuclear weapons: http://www.abolition2000.org/groups/mayors/;

*Books Not Bombs!* Stop all cuts to public education. Don't raise tuition. Invest in education, not weapons of mass destruction. More information on the Books Not Bombs campaign http://www.nyspc.net

*A *Healthy Environment!* Clean-up nuclear weapons sites! Stop building up the US nuclear arsenal. Livermore Lab has already leaked over 1 million curies of air-borne radiation in the Bay Area biosphere. In the next few years Livermore Lab proposes to store and work with even larger quantities of radioactive materials.

BRING A BOOK! Show your support for education. If you can't come, mail a book (at book rate) to: WSLF, 1504 Franklin Street, #202, Oakland, CA 94612. Books will be donated to the Buenas Vidas Youth Ranch, a Safe Home for Boys, in Livermore.

PEACE CAMP: Sunday, August 8, there will be a peace camp at Del Valle (15 minute drive from the Lab). RSVP strongly recommended (space is limited): Will Parrish illparrish [at] yahoo.com or call Will at (925) 443-7148. Camping is $5 per person, children 12 and under are free; make checks payable to Livermore Conversion Project. Mail checks to 2582 Old First St., Livermore, CA 94551: Attention Will. Please write for "peace camp" in memo line.

NONVIOLENT DIRECT ACTION: We are calling for nonviolent direct action on Monday, August 9. Meet at 7:30 AM at William Payne Park, 5800 Patterson Pass Rd. Take I-580, exit on Vasco Rd; go South 2 miles. August 9 is the anniversary of the Nagasaki bombing. We are calling for this action in honor of Father Bill O'Donnell, who was raised in Livermore. See Nonviolence Guidelines below.

PEACE RIBBONS: Nevada County Peace Center is displaying quilted and painted panels at the rally and carrying them to the Lab. Many panels are part of a historic collection that was part of the Ribbon Around the Pentagon project from the 1980's. You can visit http://www.theribboninternational.orgif you would like to mail a panel to the Books Not Bombs action send them to 13929 Quaillan Way, Nevada City, CA 95959. For more info contact Nettie: leldredge [at] ispwest.com

NATIONAL NUCLEAR WEAPONS ACTION: In July and August over 35 events will occur across the nation demanding a precautionary approach to nuclear weapons, marking the Hiroshima, Nagasaki and Trinity Test anniversary. The days will conclude on August 9 with a national call in day to President Bush and Democratic nominee, Senator Kerry demanding: real clean-up, not the continued build up of the US arsenal. For more info on the National Nuclear Weapons Days of Action and a national calendar of events: http://www.besafenet.com

Contact Sherry: (510) 663-8065 to sponsor or endorse with your financial contributibution

NONVIOLENCE GUIDELINES: Nonviolence has always been a core value of the anti-nuclear movement. Perhaps that is because nuclear weapons represent the ultimate form of violence. The atomic bomb that destroyed Hiroshima killed some 200,000 people. Most of the 30,000 nuclear weapons in the world today have much larger explosive yields than that first nuclear weapon. Nonviolence is more than the absence of violence. Many of us believe that the active practice of nonviolence is a direct challenge to the violent policies of our governments. As we extend our hands to people new to our movement, we invite you to join us in our nonviolent direct action.

While participants in this action are not required to embrace the philosophy of nonviolence, in order to create an atmosphere that is welcoming and safe for all participants, including newcomers, children and families, the organizers ask you abide by the following practical guidelines to keep the rally and march peaceful and safe.

1. We will use no violence, physical or verbal, towards any person. We consider speech or acts that are racist, homophobic, sexist or against persons with disabilities to be violent.
2. We will carry no weapons.
3. We will not bring or use any alcohol or illegal drugs. 4. We will not destroy property 5. We will respect the rights of all people.
6. We will accept the legal consequences of our actions as we continue our struggle in the courts.

SPECIAL CONSIDERATIONS: The Lawrence Livermore National Laboratory, managed by the University of California (UC) is one of the two principal U.S. nuclear weapons design laboratories and as such, is one of the highest security facilities in the country. It is believed that over 1,500 pounds of plutonium is stored on site, protected by guards who have been given "shoot to kill" orders in the case of unauthorized intruders. In these times of heightened security, crossing the facility boundaries or climbing on or over the Lab fences carries an elevated risk of injury or death. In addition, UC police over the past 20 years have consistently demonstrated a zero tolerance policy for people who go limp at the time of arrest. If you choose to risk arrest and go limp, be aware that you risk extreme pain and possible injury. If past practice holds, in general those who choose to risk arrest and cooperate with their arresting officers will not be subjected to pain holds or injury.Additional Information:

http://www.nonukesstickers.com
Add Your Comments
LATEST COMMENTS ABOUT THIS ARTICLE
Listed below are the latest comments about this post.
These comments are submitted anonymously by website visitors.