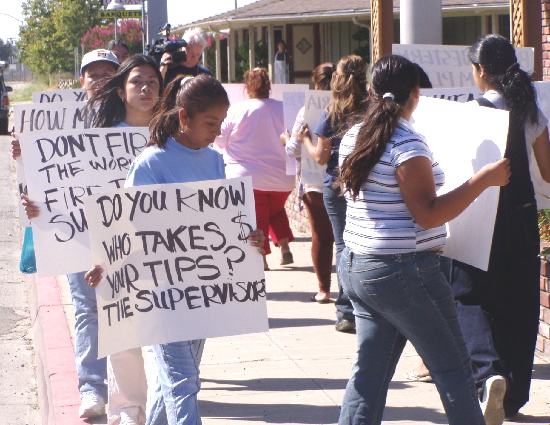 Workers at the Best Western hotel on Parkway Drive in Fresno held a rally today to demand justice at the job site. The workers say that the management at the hotel verbally abuse them, take their tips, and make them work in unsafe working conditions. Isabelle Ledezma said she left her housekeeping job at the hotel "because our bosses made us work like animals, they verbally abused us, and did not provide us with gloves when we had to clean toilets." Isabelle and other workers complained that Best Western forced them to start their shifts early without being compensated for the time worked and that sometimes they had to work on their lunch break to complete their assignments.

Ledezma said that Best Western does not supply gloves and that workers are required to either bring their own gloves or clean toilets with their bare hands. The workers at today’s rally also said that hotel supervisors gave preferential treatment to family members, giving them easier jobs. One worker said she was employed as an on call/part time housekeeper and didn’t have a regular schedule. She would have to be ready at 6 AM in the morning, in case the hotel needed her services. If not, she was paid nothing.

The manager of Best Western, a man later identified as Erick, told me that if I didn’t move my car from his parking lot that he would have it towed away. When asked to comment about the workers complaints he refused to even give his name. His only comment was that he was going to tow my car if it was not moved immediately (from the nearly empty parking lot) and that he was thinking of suing me for slander if I wrote about the rally.

All but one of the workers at the rally were monolingual Spanish speakers. They were being helped by Polo Chavez of the Comite No Nos Vamos. Chavez said that the workers were in contact with the Central California Legal Services and were exploring their legal options. Chavez said that the workers at today’s rally and those at other hotels in the area were looking at unionizing their workplaces. The Hotel Employee and Restaurant Workers union would be the natural ally of these workers who are paid minimum wage and have no protection against abusive managers.

There is not a tradition of union organizing in the hotel and restaurant sector in Fresno. In fact, there is not a single hotel in this city whose workers have a union contract. The La Ryan conference center is the only unionized food service facility in town. You have to go to Visalia if you want to stay in a union hotel. The obstacles to organizing are immense - many workers employed in the hotel industry are undocumented and can be threatened with deportation if they complain. Many private sector employers would illegally fire employees who worked to organize a union. By the time the National Labor Relations Board found the employer guilty of unfair labor practices (often times this takes several years) the effort to bring in a union is over. The firing of union activists is a tactic the employers use to threaten and intimidate union supporters.

The workers at this rally, most of whom have already quite their job at Best Western, did not have any clear direction on what to do next. Some will find jobs at other hotels where conditions are not as bad. Some will simply go from one difficult job situation to another. Until there is a successful effort to organize these low income workers into a union that can protect them from abusive employers and increase their wages, there will be many more rallies and picket lines calling for justice at hotels like Best Western in Fresno. 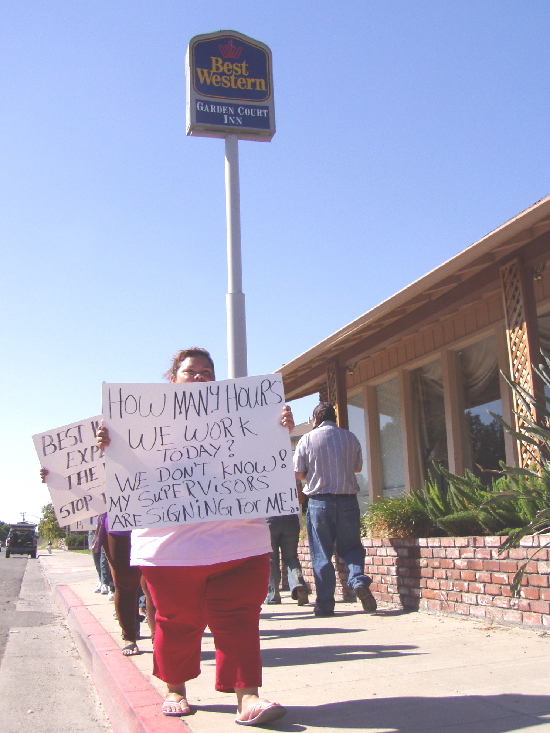 Photos by Mike Rhodes
http://www.fresnoalliance.com/home
§Give us back our tips
by Mike Rhodes (MikeRhodes [at] Comcast.net) Saturday Jun 26th, 2004 11:55 AM 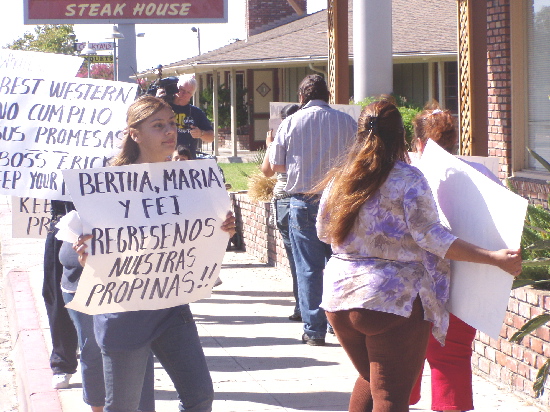