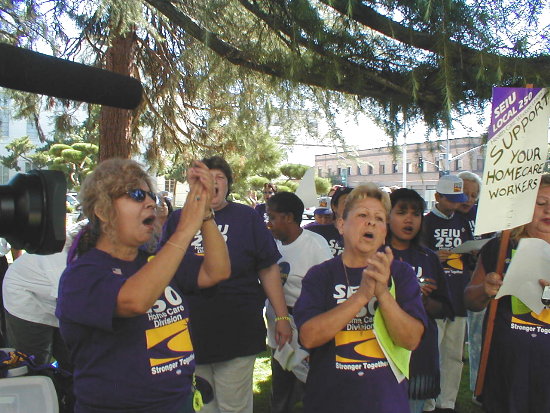 On Saturday, May 29th, 10,000 Fresno County homecare workers won their first contract agreement, after several years of difficult negotiations. The homecare workers, represented by SEIU 250, the largest Health Care Workers union in the Western United States, became one of the largest bargaining units in all of North America to secure a first contract this year. In the long fight, Fresno County homecare workers rallied, marched, picketed and pressured county supervisors to adopt standards that called for better wages, medical insurance and access to job training.

“We welcome our 10,000 new sisters and brothers into SEIU 250, and we celebrate the bravery, perseverance and many actions of solidarity among IHSS providers who have led this first contract victory,” said SEIU 250 President Sal Rosselli. “Our negotiating committee won a health insurance plan and wage increases that will change the lives of thousands of deserving workers who provide care to more than 12,000 elderly and people with disabilities in Fresno County.”

As the July Community Alliance goes to press, a mail ratification vote is taking place among IHSS providers on the breakthrough agreement. A second vote, also scheduled to occur within the next two weeks, will ask homecare workers to authorize a fair share schedule “to support our union through paying dues once the raise and benefits go into effect.”

Once homecare providers okay the contract they will receive application forms for the Kaiser Health insurance benefits the union won. Kaiser insurance includes full medical coverage and prescriptions for IHSS providers who work at least 80 hours a month.

The agreement also calls for the establishment of a registry to help connect homecare providers with clients and more hours of work and free training for homecare workers who want it.

“We fought for years to win this contract,” said Florine Furlow, a Fresno homecare provider who was involved in the contract campaign from the start. “We finally won. With the improvement in benefits and wages, we’ll hopefully be able to get more folks interested in working as homecare providers. Then, the clients will benefit as well from having more homecare workers on hand to meet the requests for services.”

With over 90,000 members, SEIU 250 is the largest and fastest-growing healthcare union in the Western U.S. We represent every type of healthcare worker, including nursing, professional, technical, paramedic and service classifications. Our mission is to achieve high-quality healthcare for all.