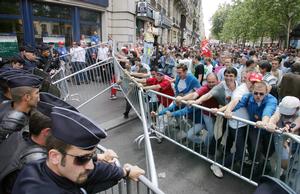 PARIS June 15 - Striking power workers cut France's national electricity output and blacked out the homes of targeted politicians on Tuesday as thousands of others marched against plans to partly privatise Electricite de France.

The protests came on a day when Finance Minister Nicolas Sarkozy was due to present draft legislation to parliament to change the status of the EDF utility and pave the way for selling off up to 30 percent of the group to private investors.

Striking workers cut 12 percent of EDF's output, according to officials from the Communist-linked CGT labour union, but there were no immediate reports of the power utility having to reduce or cut residential electricity supplies.

In parts of Bordeaux and Grenoble and other town, workers carried out commando-style operations to cut power to supermarkets, public offices and the houses or holiday homes of lawmakers belonging to the ruling UMP party.

In Paris, several thousands of EDF employees walked towards parliament behind a huge EDF truck with a dummy electricity worker hanging by the neck, to the deafening noise of sirens, horns, firecrackers and carnival music.

``Today is a day that'll count for our future and our lives,'' said Jean Mengual, a mechanic who has worked for EDF for almost 30 years.

Union organisers estimated the Paris march turnout at around four or five thousand, but reporters on the scene reckoned the number could be lower.

EDF and ministers vowed to stand by the reform despite the protests. ``There is no going back,'' EDF chairman Francois Roussely told Europe 1 radio of the proposed partial privatisation.

Energy market traders said the strike pushed up prices on France's electricity market. Some experts say the protests could tarnish the image of Europe's biggest electricity exporter and could even delay the partial sell-off.

The cash-strapped government, already struggling to plug a gap in its finances, says the sell-off will raise money for EDF to invest and survive in an energy market that will be opened to wider competition in the European Union next month.

The battle is another headache for President Jacques Chirac after the UMP was savaged in European elections on Sunday, the second drubbing in three months for a conservative government unpopular over unemployment, reform and cost-cutting.

``They've been reprimanded twice by voters. When are they going to learn?'' said Stephane, a young EDF worker.

Others around him chimed in, saying France could end up with massive power supply problems of the kind that happened when the U.S. state of California privatised the industry.

CGT spokesman Maurice Marion said the union wanted Chirac to call a referendum on the issue. ``We will respect the decision of the French people,'' he said.

While the public appeared split on the need for the reforms in a poll in the Le Parisien daily, the survey of 958 people by pollster Ipsos showed 77 percent opposed wildcat power cuts.

The government has tried to sweeten the selloff by saying staff can buy some shares when the partial selloff happens. - AP
Add Your Comments
Support Independent Media
We are 100% volunteer and depend on your participation to sustain our efforts!