Newswire
Calendar
Features
Home
Donate
From the Open-Publishing Calendar
From the Open-Publishing Newswire
Indybay Feature
Publish to Newswire
Add an Event
Related Categories: San Francisco | Global Justice & Anti-Capitalism
Pictures From The June 8th Reclaims The Commons Protest At BIO 2004
by Z
Tuesday Jun 8th, 2004 12:18 PM
Hundreds took to the streets of San Francisco to protest BIO 2004. Several groups locked down and at least 25 people were arrested for nonviolent civil disobedience, protest against the growing corporate control of food and healthcare. 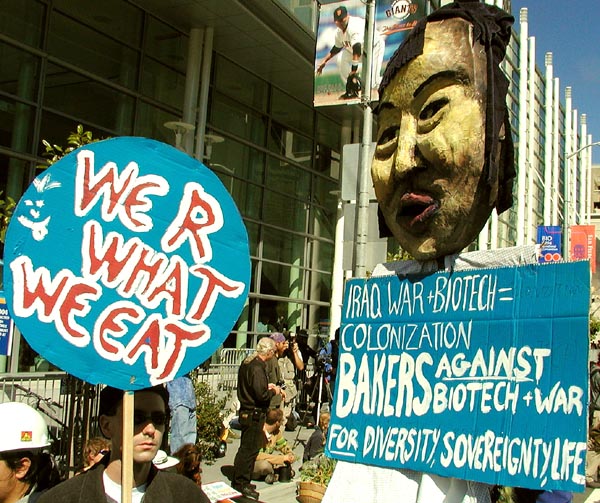 BIO 2004 is the world's largest meeting of the biotech industry, investors, lawyers and public relations officials. In past years, less than 10% of registrants have been scientists. BIO says that all they want to do is to come up with new miracle drugs and biotech cures. So why are we protesting? All of us know what it's like to suffer from a disease or to have a family member or friend killed by cancer. It's understandable for people to be excited when corporations promise to find cures for terrible diseases. But it's also important to know the facts so that we don't get fooled.
The biotech industry has been peddling hype for decades. Many new "miracle drugs" are announced at meetings like this one, only to be found later to be highly toxic to patients in clinical trials. We were told that gene therapy would give us cures for everything from alzheimer disease to cancer, What happened? After two decades of human gene therapy experiments, thousands of people were given illnesses and several killed as a result of these experiments, and not a single person anywhere in the United States cure of any disease by gene therapy.

Healthcare for profit means that these corporations actually have little investment in solutions that really keep people healthy. The more that they can push drugs to people from the moment they go to school (11 million children on Ritalin) until the moment they die, the more profit there is to be made. These biotech companies care about people's health as much as the tobacco industry cares about cancer. Some of these biotech corporations actually produce and sell chemicals known by the State of California to cause cancer, and fight regulations which would stop these chemicals from being released int o the environment, and then also sell drugs for cancer treatment. Then they say they don't understand why we could possibly want to demonstrate. 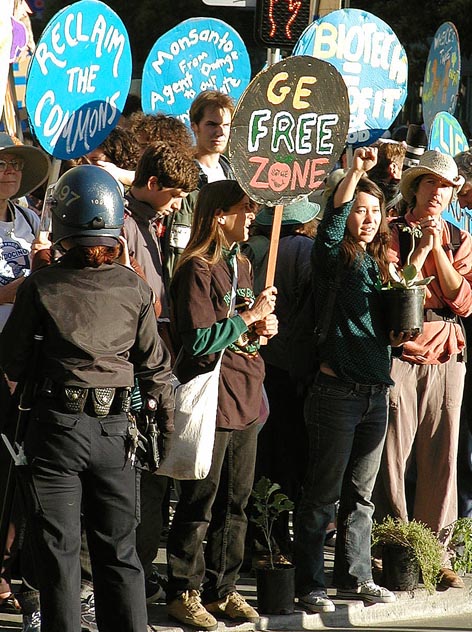 Gavin Newsom says that he wants to offer tax breaks for the biotech industry to invest in the Bay area. But biotech has been an economic disaster for people around the world. It is another dot.com boondoggle. According to the Wall St. Journal, biotech investments are highly speculative and unstable, The industry has already gone through many boom and bust cycles since its inception in the late 1970s. Total investments have approached $100 billion, and cumulative net losses are more than $40 billion. The Bay area doesn't need another speculative bubble that brings well-paid jobs for skilled specialists. We need economic and racial justice for the poorest communities, with green, clean jobs that strengthen our local economy in the long term. 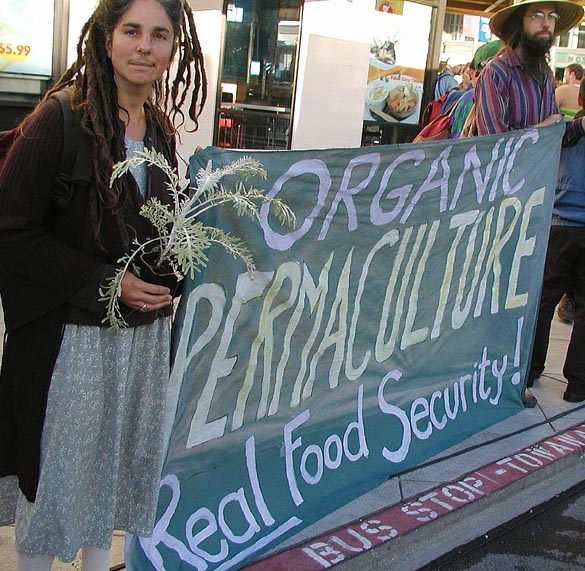 What's wrong with biotechnology? Why are we demonstrating?

"Monsanto should not have to vouchsafe the safety of biotech food. Our interest is in selling as much of it as possible. " — Phil Angell, Monsanto director of corporate communications

There is a massive global experiment going on. The biotechnology industry is using genetic engineering techniques which enable them to take DNA from any species—bacteria, viruses, insects, animals or even humans—and engineer them into other organisms. Food plants are being engineered to produce pesticides. Goats have been engineered with a gene from a spider so that they can be milked for the spider web protein. Corn has been engineered with human genes so that it contains human antibodies that attack sperm. If the biotech industry is allowed to continue, then we could witness the commercialization of genetically engineered trees, fish, livestock, grains, fruits and vegetables over the next decade. In the next two decades, we could start seeing genetically engineered humans. Future generations will look back on these years as the time when human society had the choice whether or not their world was going to be genetically engineered. 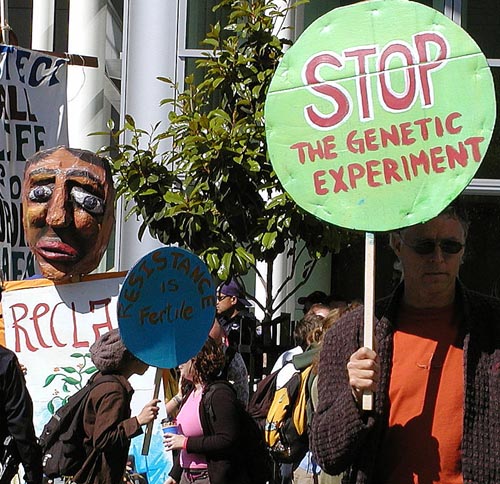 "I have the feeling that science has transgressed a barrier that should have remained inviolate . . . you cannot recall a new form of life . . . It mil survive you and your children and your children's children. An irreversible attack on the biosphere is something so unheard of so unthinkable to previous generations, that I could only wish that mine had not been guilty of it. " — Erwin Chargqffi Professor Emeritus of Biochemistry, Columbia University,, and discoverer of' Char gaff s Rules ', which laid the scientific foundation for the discovery of the DNA double helix

About 80% of all processed food in the United States now contains one or more genetically engineered ingredients. These ingredients are untested, unlabeled and unsafe. Although most of the world has rejected genetically engineered crops, the US is aggressively pursuing their development, and planting about 50 million acres are planted each year. The most common crops are corn, soybeans, cotton and canola. There is no long-term safety testing of genetically engineered food. Short-term animal feeding trials are conducted in some cases. The research is mostly done by the biotech companies themselves. No evidence from human trials for either toxicity or allergy testing is required. No independent checks of the company's claims are required.

"This technology is being promoted, in the face of concerns by respectable scientists and in the face of data to the contrary, by the very agencies which are supposed to be protecting human health and the environment. The bottom line in my view is that we are confronted with the most powerful technology the world has ever known, and it is being rapidly deployed with almost no thought whatsoever to its consequences. " —Dr Suzanne Wuerthele, US Environmental Protection Agency toxicologist 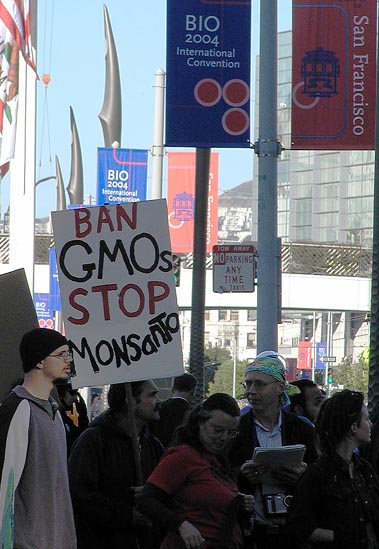 Corporations are being awarded patents for plants microorganisms,, and animals. The biotech industry sends out 'researchers' around the world to discover genes that may have commercial applications. Often this includes asking indigenous people which plants have been traditionally used for medicinal purposes. Then these 'researchers' take back samples to their laboratories, isolate active ingredients, and patent these medical properties of the plant as their awn inventions. This is what many people in the wold call biopiracy - the corporate theft of the genetic resources of this planet. Biotech corporations are also patenting the genes of humans. Patents have been awarded for umbilical cord cells, bone marrow stem cells, breast cancer cells. It is estimated that of the 30,000 genes now believed to be in the human genome, over a thousand of these have been patented or have patents pending.

'We . . . strongly object that the image of the poor and hungry? from our countries is being used by giant multinational corporations to push a technology that is neither safe, environmentally friendly, nor economically beneficial to us. " — Statement signed by 24 delegates to the-UN Food and Agricultural Organization from 18 African countries 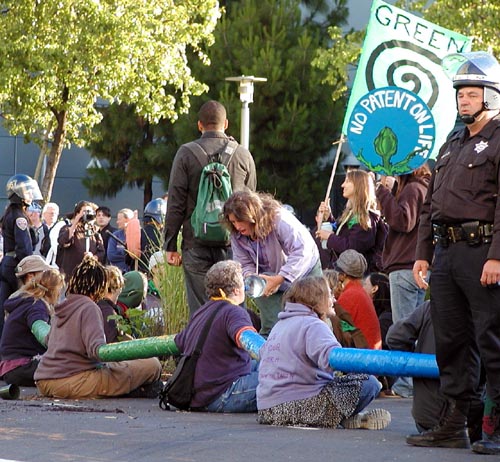 Sorry if your day is disrupted by these demonstrations or by the massive police presence. If we don't take action, then the very basis for our life on this planet is going to be irreversibly disrupted by the biotech industry.

If we don't stop and change our direction, we're going to wind up where we're headed: a world governed by the rich, for the rich, with the only public services being the police who brutalize the rest of us, the guards who lock us up, and the military who keep the rest of the world in line. Direct action and civil disobedience are American traditions and have always been an integral part of struggles for justice, from the Boston Tea Party to women's suffrage to the civil rights movement. As people of conscience we cannot be silent in the face of such gross injustice and the corporate take over of our government, food systems and communities. 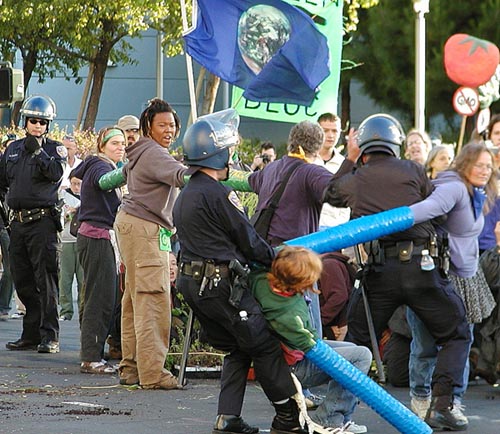 We are workers, students, teachers, farmers, immigrants, gardeners, Moms and Dads and grandparents, San Franciscans, Bay Area residents and out-of-towners. We are Reclaiming the Commons, reclaiming that which is common to us all and which sustains our lives, our environment, water, seeds, genes, culture, public and political spaces. We believe in the right of communities to control their resources and destinies. We believe in the mutual responsibility to care for each other and coming generations, and the right of all people to have a voice in the decisions that affect them, including economic decisions, We believe in a world that provides food, housing, education and health care for all- not riches for a few. A world of real abundance, based on respect for nature, renewable resources, and the rights of worker to lives of dignity, a world of true security, where we can look forward to a future better than today, for ourselves and our children. So join us! That world is possible, and we can get there if everyone who cares is willing to act. 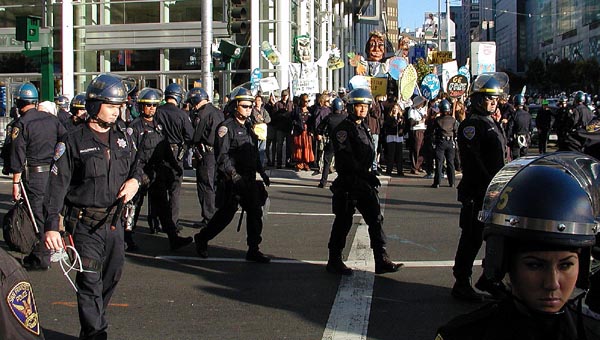 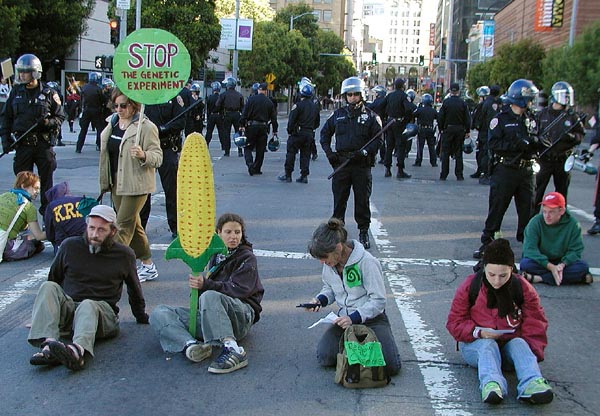 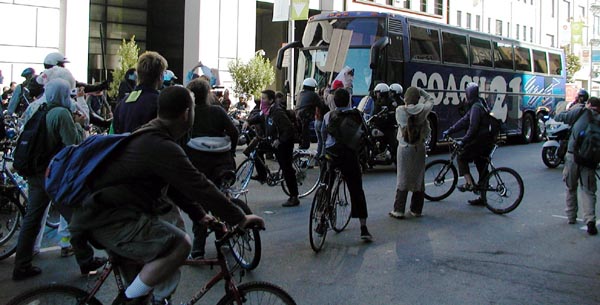 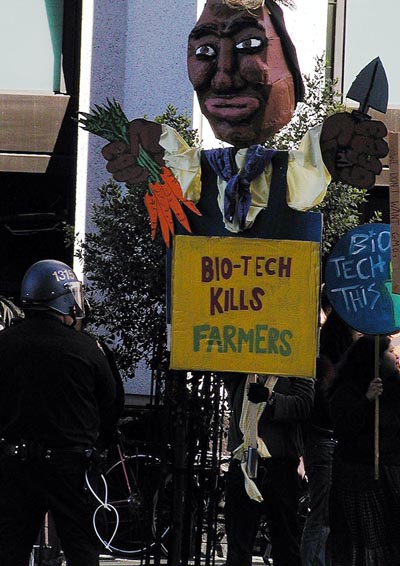 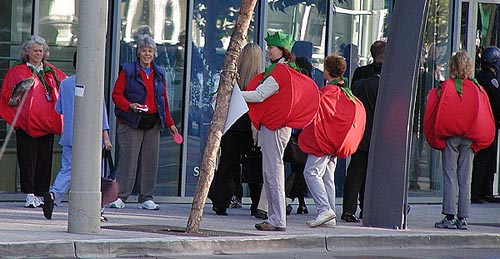 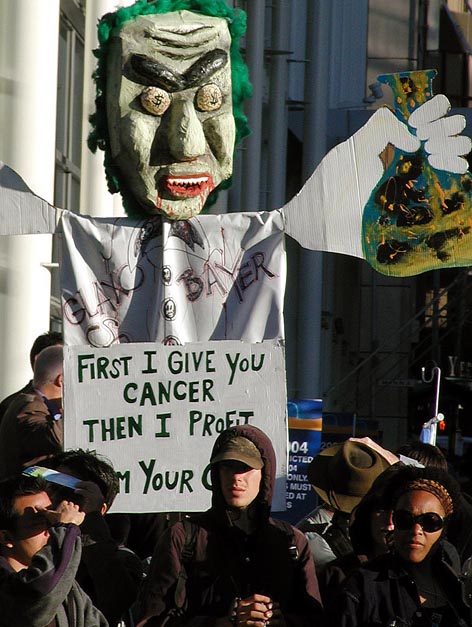 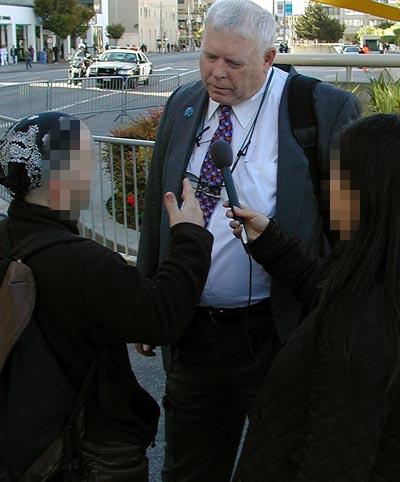 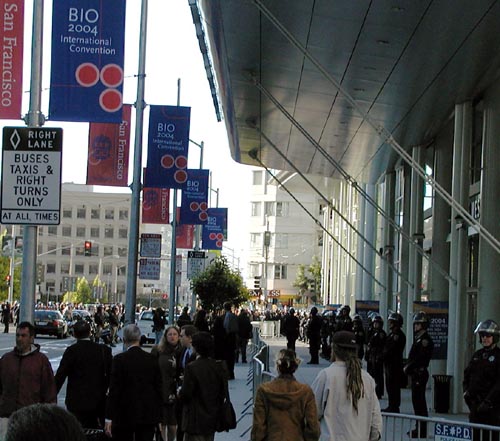 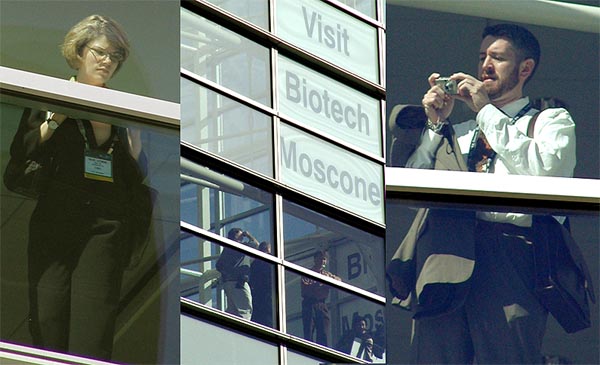 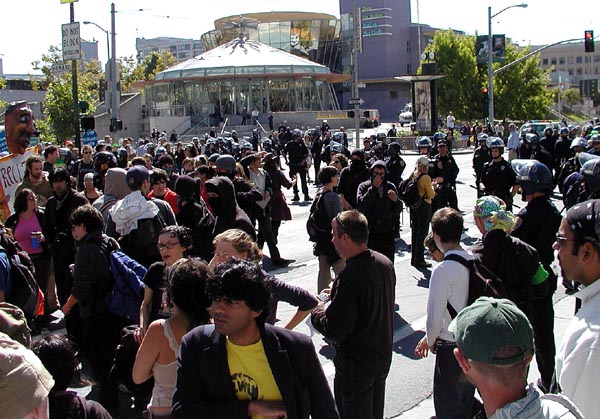 http://www.reclaimthecommons.net
Add Your Comments
LATEST COMMENTS ABOUT THIS ARTICLE
Listed below are the latest comments about this post.
These comments are submitted anonymously by website visitors.