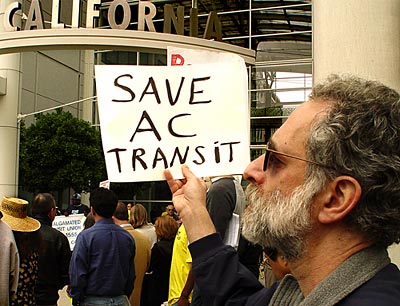 Oakland - People around the state are rising up and speaking out against Arnold Schwarzenegger's proposed cuts to the state budget. Well over a hundred people rallied outside the State of California Building in downtown Oakland on Thursday to protest the proposed massive cuts to AC Transit, BART and other Bay Area public transportation services.

The Transportation and Land Use Coalition helped organize the rally and released a new report, Cutting Transit, Terminating the Economy: Quantifying the economic and social impacts of Governor Schwarzenegger’s transit cuts on the Bay Area which details some of the drastic cuts to Bay Area transit systems, with, "AC Transit standing to lose $20 million a year (8% of it's operating budget) and BART standing to lose $9 million a year. In Marin County, the transit district stands to lose $500,000, representing a large portion of their funds for paratransit service for the senior and disabled community." The report also contains an assessment of the economic impact to AC Transit riders and concludes that the proposed budget cuts would really hurt those most in need of public transit: low-income residents, people of color, students, the elderly, and disabled passengers. AC Transit is informing it's riders that if Schwarzenegger's budget passes, there will be likely be the equivalent of "NO weekend service or NO school service beginning July 1."

BART would also be hit hard by the proposed budget. Alan Hollie, an Oakland citizen and union member of Amalgamated Transit 1555 (BART Train Operators and Station Agents) discussed the cuts BART is having to propose, asserting the state would be, "putting public safety at risk by eliminating end of the line workers, system service workers and understaffing stations," saying further that, "if you're disabled or you get hurt in a station and you don't have the proper staff, then there will just be no one to go to."

Assemblywoman Loni Hancock (AD 14) issued a statement in support of AC Transit and BART, the primary transit agencies within her district. The statement read in part, "One of the most important things a government does for its people is provide transportation. People who depend on transit for travel to school and work, seniors and people with disabilities, who rely upon public transit to remain viable members of our community, should not bear the cost of the taxes cut in the good times of the last decade." 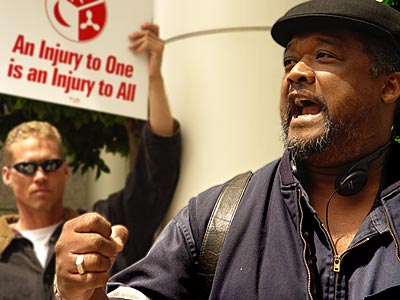 Alan Hollie, union member of Amalgamated Transit 1555 (BART Train Operators and Station Agents) spoke vehemently about potential job losses and resulting concerns for public safety at the rally in Oakland.
http://www.davidhanks.org
Add Your Comments
LATEST COMMENTS ABOUT THIS ARTICLE
Listed below are the latest comments about this post.
These comments are submitted anonymously by website visitors.