by Mike Rhodes (MikeRhodes [at] Comcast.net)
The City Council in Fresno is moving forward to build an outdoor drunk tank which will be run by a Christian group who also operates a homeless shelter in the downtown area. 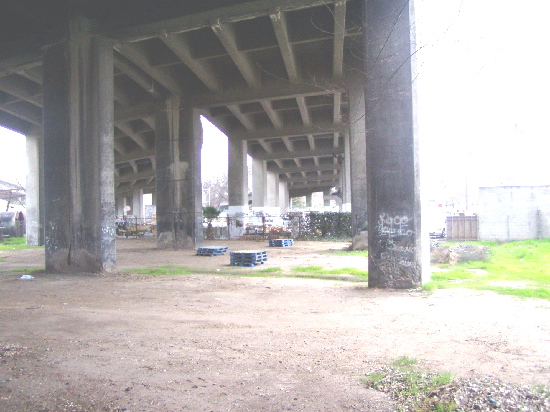 The City of Fresno is setting up an outdoor drunk tank which is perhaps the only one of its kind in this country. City officials say that this is an "innovative" way to save money. The facility will be run by The Rescue Mission and will be located in the epicenter of Fresno’s homeless population. While City officials claim that this is not another attack on the homeless, critics have their doubts.

Speaking before the City Council on Tuesday , May 11 Gloria Hernandez said "I have a lot of concerns with this proposal. If we have a drunk tank both rich and poor ought to go in there. I hope that when you look at this the money is not important - the people are important." Edie Jessup said that she was concerned about the "20,000 plus homeless in Fresno and Madera who are at risk because of the eroding safety net." Edie went on to say that "an open air drunk tank is not a solution to the problem and this has a terrible appearance for the city of Fresno. I can only imagine the legal and human rights suits that the establishment of this facility will create."

The outdoor drunk tank will be operated by The Rescue Mission, under an overpass on G street in downtown Fresno. Temperatures get up to 110 degrees in the summer and down to 28 degrees in the winter. The director of the Rescue Mission, Larry Arce says that he believes the people brought into the drunk tank his organization will run are in need of spiritual guidance to resolve their problems. It appears that Fresno taxpayers will soon be paying for evangelical Christians to proselytize persons picked up for public intoxication.

Captain Greg Garner, who is with the Fresno Police Department, says that it costs $170 to book someone in the downtown jail for a 647F - Public intoxication. He claims that the City will save up to $400,000 a year if each of the people picked up were taken to the open air drunk tank rather than being booked into the County jail. But, even Captain Garner admits that not every person picked up will be taken to the drunk tank instead of the jail. Therefore, the potential savings will be considerably less than stated. Captain Garner said that "no combative individuals, nobody on drugs, no non ambulatory individuals, and no women will be taken to the Rescue Mission facility. Some critics have suggested that the discrimination based on sex is illegal. Other critics have expressed concern that this experiment will end up costing the City money if someone dies or is seriously injured due to negligence from the inadequately trained staff at the Rescue Mission. One $10 million dollar lawsuit arising from the lack of care would make this a very expensive social experiment for the City of Fresno. As far as anyone can determine the supervisors at the rescue mission will not be trained medical professionals prepared to deal with the variety of problems they could encounter with the individuals they have imprisoned.

But these concerns did not deter the enthusiasm for the project by City Council members. Brian Calhoun was almost giddy saying that he was " very intrigued and impressed with this approach.

This is a win-win. A thumbs up for a very good way for dealing with this population." Even our resident liberal, Tom Boyajian voted to support the proposal. Boyajian dismissed the potential to convert the prisoners to Christianity by saying "Maybe you will give them handouts and say this is the kind of thing that maybe can help you because you have an issue that you need to take care of. You are trying to bring more humanity to these individuals."

The outdoor drunk tank is the latest in a long series of attacks on this communities homeless population. It started with a push to move the homeless South of Ventura - the homeless were harassed when they were in the downtown core where builders and developers are planning major re-development projects. About the same time an anti panhandling ordinance was passed and a public relations campaign implemented to convince the public to not donate cash to the poor and homeless. The public was told that they (the homeless) would use money to buy drugs and alcohol. Earlier this year the City of Fresno bulldozed the homeless encampments on Santa Clara and throughout the downtown area, again saying that they were cleaning up the streets to prevent crime and drug use. Now, we have another project gearing up to further attack and humiliate the homeless - an outdoor drunk tank where they will be put on public display behind a chain link fence topped with razor wire. The plan for an outdoor drunk tank is not only dangerous to the health of those unlucky enough to end up inside but is probably blatantly illegal.

The purpose of these attacks on the homeless is to make life so miserable for them that they simply give up and move to some city that is not as hostile. There is another way - The City of Fresno could treat each resident with dignity and respect. They could provide services that would help the homeless live a better life. They could open up some of the empty buildings downtown as homeless shelters. Community activists can be supportive by helping the groups that support the homeless - groups like Food Not Bombs, The St. Benedict Catholic Worker, and the Sleeping Bag Project. It is important for the progressive community to keep the homeless on the radar screen and advocate for their fair treatment. The Indymedia staff in Fresno will continue to follow the story and bring you information from the War Zone in this Tale of Two Cities. 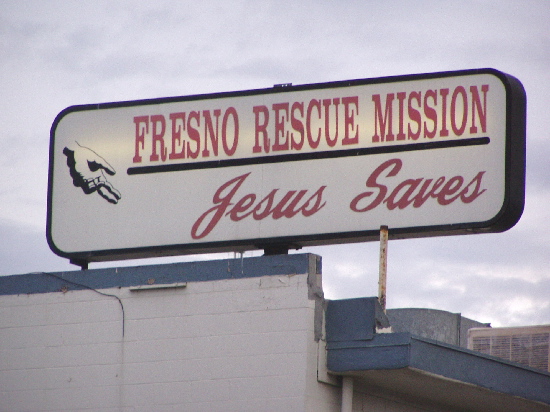 The Fresno Rescue Mission is run by Christian who attempt to convert the homeless to their faith.
END_OF_DOCUMENT_TOKEN_TO_BE_REPLACED
§Gloria Hernandez
by Mike Rhodes (MikeRhodes [at] Comcast.net) 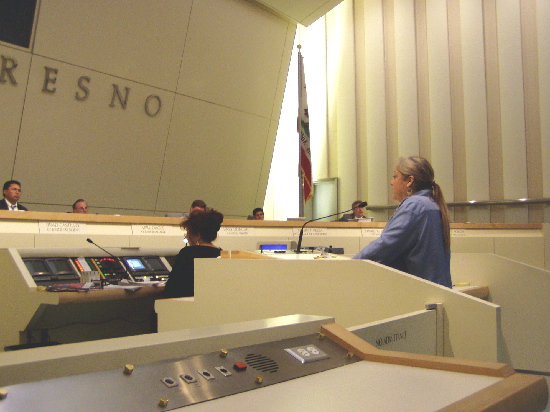 Gloria Hernandez speaks before the Fresno City Council. She says that people, not money, should be the most important consideration.
END_OF_DOCUMENT_TOKEN_TO_BE_REPLACED
§Captain Greg Garner
by Mike Rhodes (MikeRhodes [at] Comcast.net) 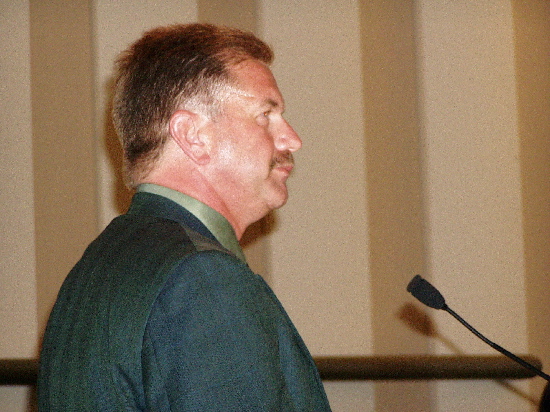 Captain Garner wants to put people picked up on 647F - Public intoxication into an outdoor drunk tank to save the City money.
END_OF_DOCUMENT_TOKEN_TO_BE_REPLACED
§Tom Boyajian
by Mike Rhodes (MikeRhodes [at] Comcast.net) 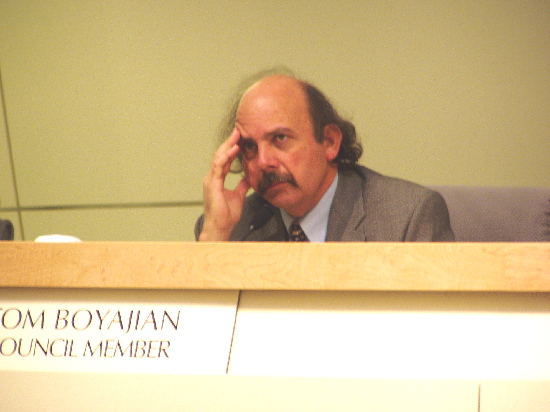 Liberal City Council member Tom Boyajian supported the proposal for an outdoor drunk tank.
END_OF_DOCUMENT_TOKEN_TO_BE_REPLACED
Add Your Comments
Comments (Hide Comments)
§drunk farms
by fresno born
I have a better solution: reopen the drunk farms! When someone is picked up for being drunk in public for the third time in 90 days, he goes to the drunk farm! There he can spend 90 days detoxing and working outdoor in the fresh air to help grow food for himself and for the jails. After two or three of these visits, the public drunk usually gets the message and stays out of sight or leaves town.
Add a Comment
§constitution
by cp
Hmm. I would wonder if that would be legal under the 14th amendment. There are things such as chain gangs around the country, and prisoners are considered an exception to some constitutional rights, but I thought that the reason they pay prisoners at $.70/hour is that they are required to pay them minimum wage due to 14th amendment and then they deduct for board and the victim's fund etc. and there is always an option not to work. I support this because otherwise there would be an incentive for slave labor camps like China or the civil war south.
Add a Comment
§How does this Humiliate the Homeless?
by D Grove (dgrove [at] springmail.com)
I wonder about the persecution complex evident in this article. The issue is an outdoor trunk tank as a place to detain men who are drunk in public. If a peson is not drunk, he won't be humiliated by the place just because he is homeless.

There are other concerns: Would it be considered inhumane treatment for a prisoner to be kept outdoors in the Central Valley heat during summer or the cold fog of winter? I doubt that lack of air conditioning could be considered inhumane, but lack of heat could be. The city should mitigate the extremes of climate and get a ruling on the legalities before trying to save money by the use of this project

It seems to me that there is no gender bias here. It would be inappropriate and dangerous for women to be interspersed at large in such a holding facility.

Is it "wrong" "illegal" or "unconstitutional" for prisoners to have church volunteers offer their own brand of religion to captives in such a facility? This is a troubling question. Christian symbols and references abound throughout our culture and throughout our government documents and facilities. I, as a Christian, feel that is part of our American heritage and we have as much right to our customs as a non Christian has to their own heritage and customs. However, this seems to be over the line from my viewpoint. It is one thing for someone to visit the jails and offer their views of religion to the inmates. It is another thing for the inmates to be subjected to a religious indoctrination by their keepers. This is very thin ice for the city to allow a religious organization to be in contol of prisoners. Especially when they apparently will not have the proper training for working with prisoners.

Add a Comment
§More thoughts
by Dan
My big concern with this bright (besides the separation of church and state issue) idea is the known lack of training of Rescue Mission staff. Hard-core alcoholics suffer from a variety of medical problems. It is very common for people detoxing to have seizures, which can kill--I'm aware of at least one death in a local detox facility in the last few months. This facility will create a huge burden on EMS, UMC and MediCal.
Add a Comment
§Just call it FRESNO REDEPTION CAMP
by ann g
And people are shocked and awed or actually disgusted by the treatment of the detainees in Iraq.
* they would be shocked by the treatment of the homeless in Fresno. Many homeless are veterans, many homeless are mentally ill.
Since Fresno is currently under the Conservative regime, the so called not needed social and mentally ill services have been decreased for the last 20 years to non-exsistant. And the solution is a throw back to the 17th century drunk tank??? you got to be kidding me......
Pretty soon they will be burning liberals...ehmm.. I mean witches at the stake.
The officials in Fresno need to wake up and get in the 21st century and realize what the rest of the nation knows.
Drunkness... aka Alcoholism is a disease...
Humiliation just adds to the disease. This is so outrageous.

I hope those in Fresno who read this realize they should run for office. Any office. just get these small minded, ignorant, baffons out of city council so they quit making us ashamed of being from Fresno.

Add a Comment
§Easy
by cp
Just let them choose a Christian Scientist charity to run it. The american part of my family is christian scientist. My dad has a twisted arm because they brought in a healer when he broke it but he didn't believe in god strongly enough. My grandmother was kicked out of her community in Missouri when she finally got treatment for breast cancer. Still, the approach works 99% of the time. http://www.christianscience.org/navigate.htm
Add a Comment
Support Independent Media
We are 100% volunteer and depend on your participation to sustain our efforts!