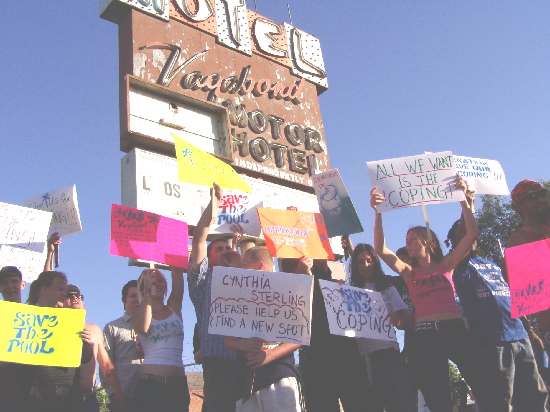 The pool at the abandoned Vagabond Hotel is probably the biggest tourist attraction in downtown Fresno. It is an internationally acclaimed skateboard park and a favorite hangout of local youth. Naturally, developers and the City of Fresno have condemned it and are in the process of destroying the site.

A group of youth were outside the chain link fence this afternoon shouting to the world their frustration about the destruction of this community resource. They were also asking the city to provide land to build a new skate park. They would like to use the rim, what they call the "coping" to build a replica of the Vagabond pool.

Jeff Roberts, who is one of the developers who bought the Vagabond, is also an owner of Granville Estates in North Fresno. Roberts has a long and interesting relationship with property development in Fresno. In 1995 Roberts went to prison for extortion and tax evasion in the federal Operation Rezone case. In that case, City Council members were bribed to "re-zone" parcels to benefit developers. The protestors said they were heading to the North Fresno offices of Granville Estates to continue the protest on Wednesday, May 12, 2004.

Why are the developers and City of Fresno determined to destroy the one site that is a magnet for youth? Was it not possible to develop the pool into a park that would be a center of attraction in downtown Fresno? The developers claim that they are interested in building an artistic center in Uptown - their name for the Northern part of downtown Fresno. It would be creative and unique if the developers plans for Uptown included valuing an existing local landmark that attracts youth from around the world. It would be inspiring if the developers were interested in something other than making money. But, the youth that are drawn to the Vagabond Hotel pool probably do not buy their clothes at The Gap or wear Nike shoes. They are not the upscale consumers and yuppies that are going to buy $300,000 artist lofts in Uptown.

In short, the skaters are not a part of the developers vision of a theme park in downtown Fresno. The developers see lakes and man made rivers, box stores, and twenty story office complexes, but not a skate park for youth who are just looking for a good time. It is ironic that in a city that is developing like crazy in North Fresno and that has plans to completely transform downtown can’t find a way to preserve a skate park for youth in downtown Fresno.

It is, unfortunately, a story that is often repeated in this community. The interests of the poor, immigrants, youth, homeless, and other powerless groups are completely overpowered by the builders & developers, and the politicians who serve their interests. There is a solution to the endless greed and abuse that the disenfranchised in this community face. The answer lies in seizing political power by supporting the Central Valley Progressive Political PAC. 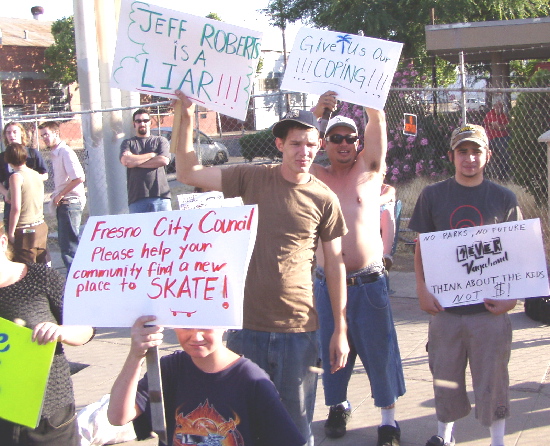 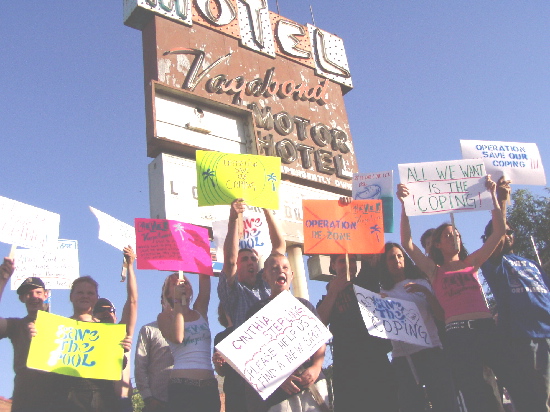 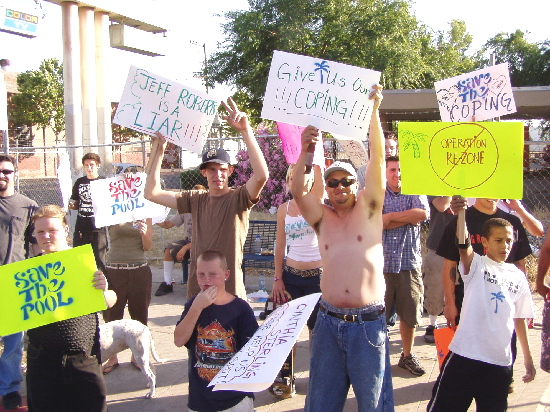 Fresno, Ca—Skaters and Youth who have been using the famous skate park at the abandoned Vagabond Inn in Downtown Fresno protested what they said was broken promises by Fresno developer Jeff Roberts of Granville. The protest group maintains that Roberts had promised when this issue came before the city council that he would sell the ‘coping’ of a pool in the skate park to the youth.

The pool in question is seen as a cultural icon and is famous around the nation and has been featured in books by well-known skaters such as Tony Hawk. It was the plan of the downtown youth to use the coping to rebuild and preserve the well-known pool in another location to preserve this source of youth pride in their community.

The group maintained vigil on Tuesday and plans to return on Wednesday, May 12. While according to the group they received word through Fresno Police Officers who spoke to Roberts while assessing the situation from a distance that he plans to sell the coping to the group, they will maintain vigil on Wednesday beginning at 3:30 p.m. at Amador and Broadway in the hope that they can come to a formal agreement with Roberts.

They are asking that:
· Granville and Jeff Roberts hold to their agreements and sell the coping of the Vagabond pool to the group.
· Granville’s assistance in relocating the pool to a safe location under the 180 Freeway at San Pablo St. A common remediation for sites of importance prior to development.
· The City of Fresno’s donation of land to build the skate park as a positive step towards making the revitalization of downtown Fresno inclusive to youth; and as a recognition of the efforts of youth to find positive outlets in their community.

Many community advocates are concerned that this is the latest example of a downtown revitalization that has not taken into account the needs and well being of the current inhabitants of downtown Fresno. It is felt that this situation as well as what many feel is the criminalization of homelessness and lack of communication with small business owners in the downtown area on the subject of revitalization exemplifies their growing concerns.

May 12, 2004 -- Youth, Skaters and members of Fresno's Moving City Collective protested once again today in front of the Vagabond Inn in downtown Fresno. In high morale, the group turned their focus today on not only keeping pressure on Jeff Roberts to stay true to his word, but also on continuing to make a positive community impact by serving food prepared by the Moving City Collective to area residents.

While all broke bread together, the group reached out to area residents who joined the group in their protest and what possibly for some area residents was their only meal for the day. Together the youth, area residents, and homeless came together around a common concern; the future of their neighborhood in the face of revitalization.

During the vigil maintained in front of Granville’s newly acquired Vagabond Inn, protesters witnessed the last of the coping being moved and sealed into a shipping container along the southernmost fence line. Separated by steel from the source of contentions, many had to wonder why Roberts did not simply honor his agreement and release the coping to the group waiting just beyond the barbed wire fence and security guards.

Middle school students from the area who spoke with the group were dismayed that the group could be treated this way. While Roberts, well known in the community after being convicted as a result of an FBI investigation into kickbacks to city council members has not given a formal offer to the group.

Even though Roberts has stopped taking their calls the group remains hopeful he will soon be prepared to honor his word and his agreement with the group and the City Council. Until then, in the words of one of the Skaters while standing in front of the internationally famous site scheduled for demolition in the days ahead, “we’ll be here until he keeps his word.”

Add a Comment
§not applicable
by Lee
Tuesday Dec 18th, 2007 9:39 PM
Jeff Roberts? Operation Rezone? Granville Estates? Youuuuuu Whooooo ....... isn't that Wathan / Castanos? Linked to Swieso, who is behind Operation Rezone? That pretty much brings it full circle, eh?
Add a Comment
Support Independent Media
We are 100% volunteer and depend on your participation to sustain our efforts!