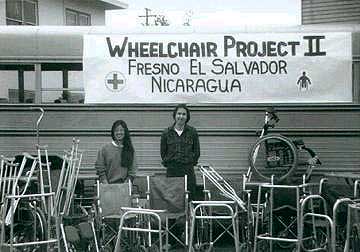 Patrick Young is from Fresno California. He is the coordinator of the Wheelchair Project. Patrick has often traveled to Chiapas, El Salvador, Nicaragua, and Haiti taking material aide on his buses. He returned to Haiti after the coup and will be sending us regular reports about what he finds. This dispatch is posted on Indymedia by his friend - Mike Rhodes


All I can tell you is that the reality here is so different, that it is difficult to even say in a way that us americanos could even relate to. Every day here in the semi safe house, same folks, friends whose entrance is always a delight, a joyful , a reptition of the joy that family reunions have, but on a daily basis. Great open smiles on black faces that you cannot resist, as their heart is in their eyes. but how do you describe the rest?

I could care less about no running water,no hot water (it is already HOT here) and the lack of electricity is solved by the generator, long in the tooth but loyal. the things that are beyond me/my limited life experiences,is seeing someone, a new young man or woman, who hangs out all day at our home/office/insane asylum of solidarity, and then maybe late in the afternoon it is mentioned that he or she is here, politely waiting all day, because yesterday, or last week, or the day before yesterday, they killed someone in front of them, maybe family, maybe not, and we are here to take testimony. they have to wait in line,as we stay up after midnite,every night,drinking too much (Haitian beer, one brand only, mas o menos, is greaT) and smoking too much, and work the laptops with a flashlight (mY DYNAMITE 18v cRAFTSMAN DRILL/flashlight BATTERY, THAT lights up a romm for 4 solid hours) or a candle to get the message out.'

I use the word "we" too generously, as it is my friend Kevin who does this like a sunken eyed tired sailor, sharp in his comments, at times harshly direct, because he doesn't have time to live normally, or to wate.. This with a new baby {paulo, our mutual delight)who is sick, and SCREAMS and makes us worry.
Today there was a young quiet black man, thin as a rail and strong (when you hug folks here, there's a bunch of sinews,not beer bellies.....except mine) who sat silent all day. I smiled politely in passing, but no real communication (as my Creole is limited anyway)

About 2 o'clock he just passed out, boom, and I was NEXT TO HIM. I FIGURED IT WAS DIABETES OR DEHYDRATION, BUT AS I HELD HIS HEAD AND PRAYED FOR A PULSE, AND as everyone FRANTICALLY GUESSED WHAT TO DO..................(sorry for the cap letters)

You see, the Suzuki we use must be push started (well actually I fixed it two days ago, but automotive reliability is non existent) and we are all wondering if we threw his limp body in the Suzuki Samurai,how fast could we get to the hospital with the interminable traffic,and then,who could pay, but the worst,......??????????

well, He had seen three of his friends killed yesterday, in front of him, brutally, (what will he do with this memory?) so you don't take someone who was lucky enough to escape to the the hospital, because they will be looking for him. So what do we do, my friends??

(This is "Reality TV" at its finset)

Two days ago we went to the hospital to visit a man who had a bone infection that was spreading. Besides the primitive conditions of the typical 3rd World hospital, he was in danger from more than the infection. there was d demonstration (many...?)m after the coup d'etat, and the way it was dealt with was to shoot into the cowd, a time honored Haitian/Salvadorean/Etc. tradition. He tore his shin up falling into one of the perpetually potholed semi streets rocks and sand that pass for real Haitian streets.

he is lucky however, as his injury is at least not easily traceable.

However, when we went to visit him, I coudn't take any photos or video, as 3 white people with video cams in a hospital room with 8 beds just might draw attention to him,and the many desperate people who will be snitches to survive just might talk to the wrong people. We gave him some money that he tucked into his pillow case,and we left.

Forward this to whoever you please. I find life here real, I find the people wonderfully friendly and ready to smile, and talk to this "blanc" at the drop of a hat, and teach me,laugh with me, in the dirtiest and worst conditions I have seen in 35 plus countries. I actually like it, after you buy a fried somethng or other or two, you're family.

Patrick
END_OF_DOCUMENT_TOKEN_TO_BE_REPLACED
Add Your Comments
Latest Comments
Listed below are the latest comments about this post.
These comments are submitted anonymously by website visitors.
TITLE
AUTHOR
DATE
Coordinator, Wheelchair Project
Patrick Young
Haiti Update
Patrick Young
Support Independent Media
We are 100% volunteer and depend on your participation to sustain our efforts!