Add an Event
Newswire
Calendar
Features
Home
Donate
From the Open-Publishing Calendar
From the Open-Publishing Newswire
Indybay Feature
Publish to Newswire
Add an Event
Related Categories: Iraq | International | Anti-War | Police State & Prisons
US general suspended over Iraq prison abuse
by Australian Broadcasting
Thursday Apr 29th, 2004 7:43 AM
The general in charge of the US-run prison system in Iraq has been suspended and put under investigation over the alleged abuse of Iraqi detainees by US soldiers.

A senior US military spokesman says Brigadier General Janis Karpinski was suspended from her duties in late January after six US soldiers were indicted for mistreating prisoners at Abu Ghraib prison.

Gen Karpinski and another six officers are under administrative investigation that could result in letters of reprimand.

The US Army confirmed the suspension after American network CBS broadcast images of US troops mistreating Iraqi prisoners.

video: r20124_49462.ram
RealVideo metafile
Photographs aired by the network on 60 Minutes II include one showing a prisoner standing on a box with a hood over his head and wires coming from his hands.

The network says he was told he would be electrocuted if he fell off.

Other pictures show nude prisoners lying on each other and simulating oral sex as US troops point and laugh.

"We're appalled. ... These are our fellow soldiers, these are the people we work with every day, they represent us, they wear the same uniform as us, and they let their fellow soldiers down," Gen Kimmitt said.

"We expect our soldiers to be treated well by the adversary, by the enemy... and if we can't hold ourselves up as an example of how to treat people with dignity and respect, we can't ask that other nations do that to our soldiers."

The program spoke to one of the six soldiers charged, Army Reserve Staff Sergeant Chip Frederick.

He has been charged with maltreatment, assault and indecent acts for posing for a photograph while sitting on top of a detainee, striking detainees and ordering detainees to strike each other, among other things.

Frederick, a prison guard from Virginia in civilian life, and his lawyer Gary Myers blamed the problems at the prison on the atmosphere created by commanders.

"We had no support, no training whatsoever," Mr Myers told CBS.

Indeed, the army investigation found a lack of leadership at the prison and concluded soldiers at the prison, most of whom are reservists, are not trained on rules for handling prisoners of war under the Geneva Convention. 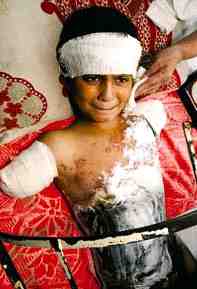 America burns and dismembers *children*. And you're not upset. Some righteous Iraqi patriots give some mercenaries what the deserve, and then upset. You're a sick man, sick, sick, sick.
Add a Comment
Support Independent Media
We are 100% volunteer and depend on your participation to sustain our efforts!