**free usage for the Indymedia network. All others please contact me to use these photos for web or print. 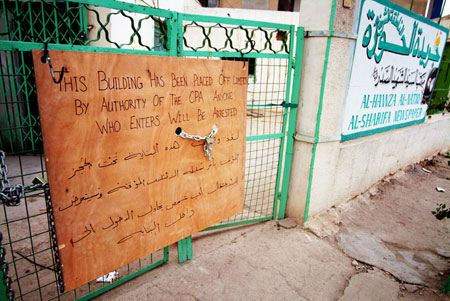 I heard the sound of freedom in Baghdad's Firdos Square, the famous plaza where the statue of Saddam Hussein was toppled one year ago. It sounds like machine-gun fire.

On Sunday, Iraqi soldiers, trained and controlled by coalition forces, opened fire on a demonstration here. As the protesters returned to their homes in the poor neighbourhood of Sadr City, the US army followed with tanks, helicopters and planes, firing at random on homes, shops, streets, even ambulances. According to local hospitals, 47 people were killed and many more injured. In Najaf, the day was also bloody: 20 demonstrators dead, more than 150 injured.

In Sadr City yesterday, funeral marches passed by US military tanks and the hospitals were overflowing with the injured. By afternoon, clashes had resumed.

Make no mistake: this is not the "civil war" that Washington has been predicting will break out between Sunnis, Shias and Kurds. Rather, it is a war provoked by the US occupation authority and waged by its forces against the growing number of Shia who support Moqtada al-Sadr.

Sadr is the younger, more radical rival of the Grand Ayatollah Ali al-Sistani and portrayed by his supporters as a cross between Ayatollah Khomeini and Che Guevara. He blames the US for attacks on civilians; compares the US occupation chief, Paul Bremer, to Saddam Hussein; aligns himself with Hamas and Hizbullah; and has called for a jihad against the controversial interim constitution. His Iraq might look a lot like Iran.

And it's a message with a market. With Sistani concentrating on lobbying the UN rather than on confronting the US-led occupation, many Shia are turning to the more militant tactics preached by Sadr. Some have joined the Mahdi, his black-clad army, which claims hundreds of thousands of members.

At first, Bremer responded to Sadr's growing strength by ignoring him; now he is attempting to provoke him into all-out battle. The trouble began when he closed down Sadr's newspaper last week, sparking a wave of peaceful demonstrations. On Saturday, Bremer raised the stakes further by sending coalition forces to surround Sadr's house near Najaf and arrest his communications officer.

Predictably, the arrest sparked immediate protests in Baghdad, which the Iraqi army responded to by opening fire and allegedly killing three people. At the end of the day on Sunday, Sadr called on his supporters to stop staging demonstrations and urged them to employ unnamed "other ways" to resist the occupation - a statement many interpreted as a call to arms.

On the surface, this chain of events is mystifying. With the so-called Sunni triangle in flames after the gruesome Falluja attacks, why is Bremer pushing the comparatively calm Shia south into battle?

Here's one possible answer: Washington has given up on its plans to hand over power to an interim Iraqi government on June 30, and is creating the chaos it needs to declare the handover impossible. A continued occupation will be bad news for George Bush on the campaign trail, but not as bad as if the hand-over happens and the country erupts, an increasingly likely scenario given the widespread rejection of the legitimacy of the interim constitution and the US- appointed governing council.

But by sending the new Iraqi army to fire on the people they are supposed to be protecting, Bremer has destroyed what slim hope they had of gaining credibility with an already highly mistrustful population. On Sunday, before storming the unarmed demonstrators, the soldiers could be seen pulling on ski masks, so they would not be recognised in their neighbourhoods later.

The coalition provisional authority is increasingly being compared on the streets to Saddam, who also didn't much like peaceful protests, or critical newspapers.

In an interview yesterday, Iraq's minister of communication, Haider al-Abadi, blasted the act that started the current wave of violence: the closing of Sadr's newspaper, al-Hawzah. Abadi, who is supposedly in charge of media in Iraq, says he was not even informed of the plan. Meanwhile, the man at the centre of it all - Moqtada al-Sadr - is having his hero status amplified by the hour.

On Sunday, all these explosive forces came together when thousands of demonstrators filled Firdos Square. On one side of the plaza, a couple of kids climbed to the top of a building and took a knife to a billboard advertising Iraq's new army. On the other side, US forces pointed tanks at the crowd while a loudspeaker told them that "demonstrations are an important part of democracy but blocking traffic will not be permitted".

At the front of the square was the statue that the Americans put up in place of the toppled one of Saddam. Its faceless figures are supposed to represent the liberation of the Iraqi people. Today they are plastered with photographs of Moqtada al-Sadr.
http://www.andrewstern.net
§Ali Faris
by Naomi Klein/Andrew Stern (expectresistance [at] yahoo.com) Tuesday Apr 6th, 2004 12:01 AM 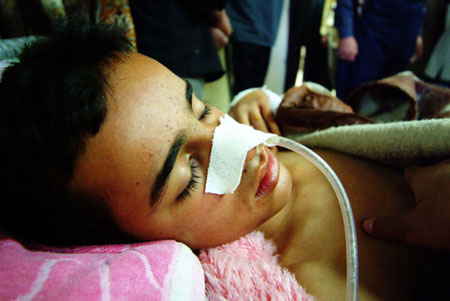 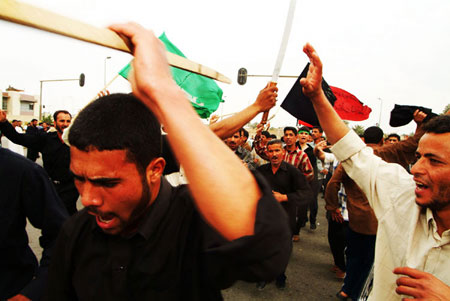 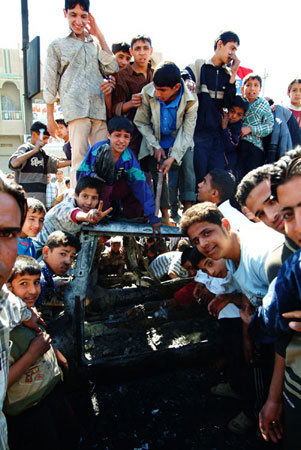 In Sad'r City, children play on a US Humvee burned the night before. April 5, 2004. Baghdad, Iraq.
http://www.andrewstern.net
§Funeral
by Naomi Klein/Andrew Stern (expectresistance [at] yahoo.com) Tuesday Apr 6th, 2004 12:01 AM 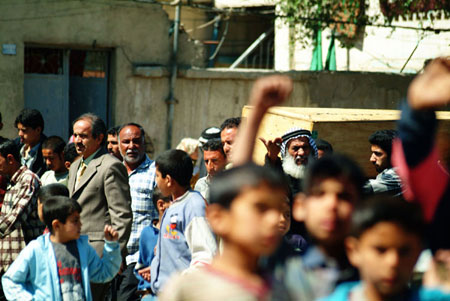 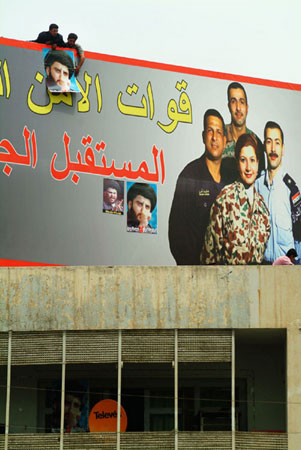 Members of Moqtadha Al-Sad'r's Mahdi Army hang a picture of their leader over an Iraqi police recruitment billboard during a demonstration in Firdos Square. April 4, 2004. Baghdad, Iraq.
http://www.andrewstern.net
§Statue
by Naomi Klein/Andrew Stern (expectresistance [at] yahoo.com) Tuesday Apr 6th, 2004 12:01 AM 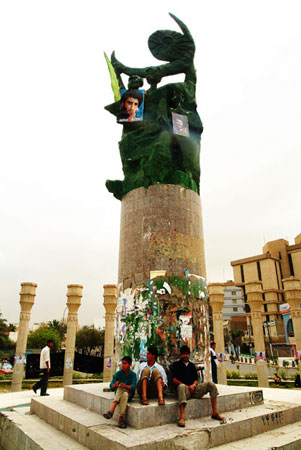 Pictures of Muqtadah Al-Sad'r hang on the famous statue in Firdos Square, the plaza where Saddam Hussein's statue was toppled in April 2003. April 4, 2004. Baghdad, Iraq. 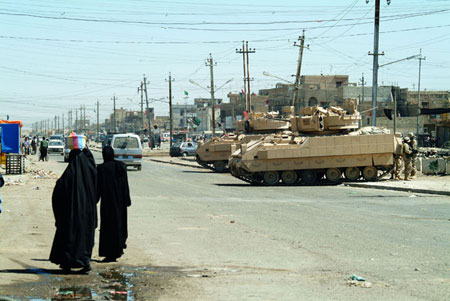 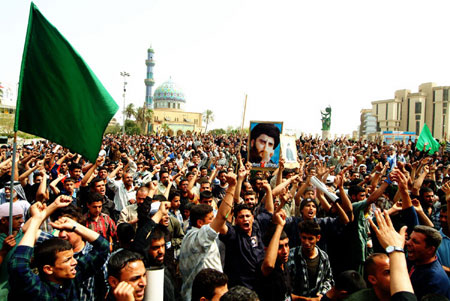 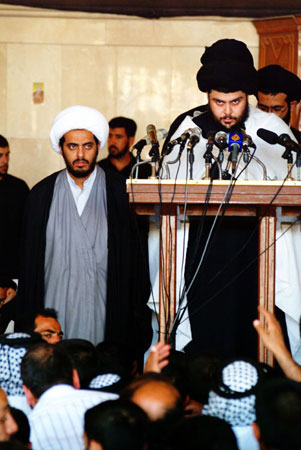 Moqtadah Al-Sad'r speaks out against the occupation at a mosque in Kufa. Kufa, Iraq.
http://www.andrewstern.net
§Prayer
by Naomi Klein/Andrew Stern (expectresistance [at] yahoo.com) Tuesday Apr 6th, 2004 12:01 AM 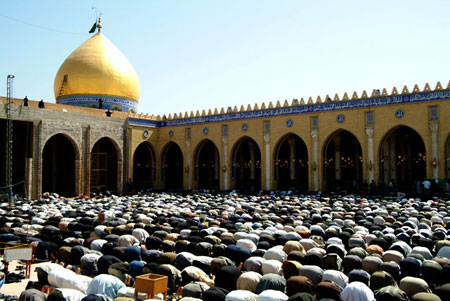 Supporters of Moqtadah Al-Sad'r pray at a mosque in Kufa after his speech. Kufa, Iraq.
http://www.andrewstern.net
§Iraqi soldiers
by Naomi Klein/Andrew Stern (expectresistance [at] yahoo.com) Tuesday Apr 6th, 2004 12:01 AM 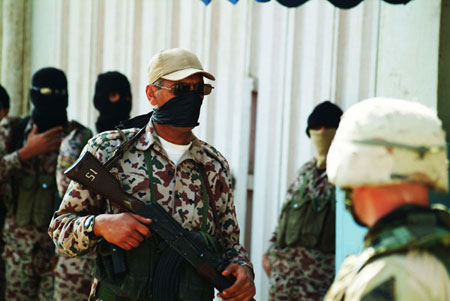 Iraqi soldiers in black ski masks prepare to quell demonstrations in Firdos Square. April 4, 2004. Baghdad, Iraq.
http://www.andrewstern.net
Add Your Comments
LATEST COMMENTS ABOUT THIS ARTICLE
Listed below are the latest comments about this post.
These comments are submitted anonymously by website visitors.