Add an Event
Newswire
Calendar
Features
Home
Donate
From the Open-Publishing Calendar
From the Open-Publishing Newswire
Indybay Feature
Publish to Newswire
Add an Event
Related Categories: East Bay | Arts + Action
Designs on Democracy, Part Two
by Peter Maiden (pmaiden [at] pacbell.net)
Tuesday Mar 30th, 2004 7:12 PM
Designs on Democracy, a conference on design, advertising, public relations and marketing for social change, took place at the University of California, Berkeley from March 26 to March 28. It was put together by the The Ruckus Society, Change the Game, Tumi's Design and The Design Action Collective. There were eight core organizers and forty volunteers. Three hundred and fifty attended. 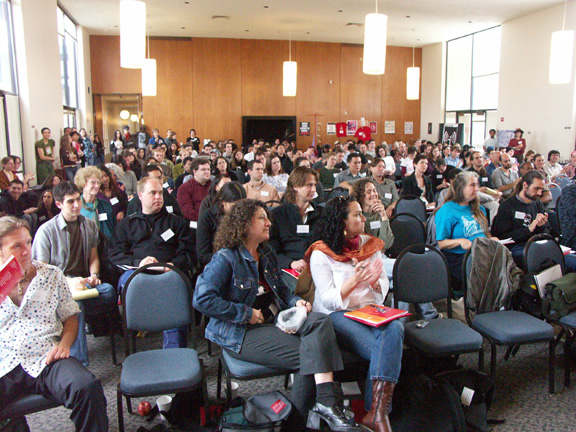 This story, in two parts, offers photographs and interviews with eight individuals who presented at the Designs on Democracy conference. Part two, below, features Favianna Rodriguez, of Tumis Design, Kamel Bell, of the Malcolm X Grassroots Movement and Change the Game, Todd Triplett, of Parks-Hall, and Fred Glass, of the California Federation of Teachers. The names of the workshops where the people interviewed did their presentations are shown above the photos. 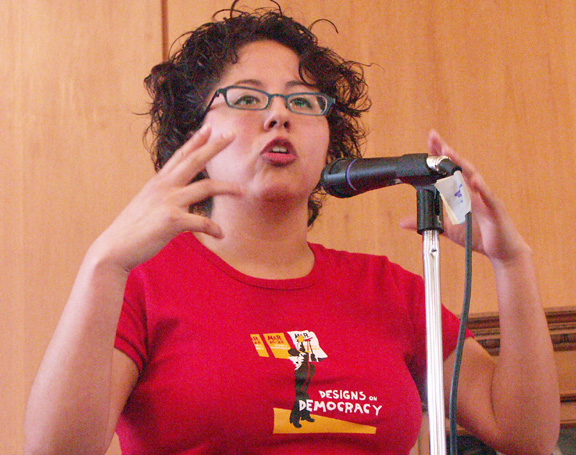 "Tumi's Design is the brainchild of the East Side Arts Alliance, an arts collective. We were kind of strategizing around how we wanted to transform our community, and one of the things we realized was that there were no businesses owned by the people in the community, and that we wanted to create sustainable businesses to support ourselves, and then to be able to do art, do design, do the art mediums. That’s how Tumi's was born three years ago. There was actually a group of designers that I had worked with before, we were all freelancers, and we just kind of came together and tried to do it more formally, and have a business entity behind us, so that we could be stronger. The model actually went really well for us. We’re constantly trying to stay away from corporate and look at how we can survive off doing jobs that we agree with, campaigns we support. We are still learning what it is to run a business and the interests of running a business sometimes don’t go hand in hand with the interests of community building, so you have to kind of weigh that. Our other function is being part of national dialogues on how we take design to the next level, and really have a critical analysis of the design we’re using for community organizing and movement building, and how we can make it more effective.

"The collective that put this program together is made up of the Ruckus Society, Tumi's, Design Action and Change the Game, four organizations. Ruckus has the whole direct action model which really organizes a large base of white activists into doing actions against globalization. We wanted that perspective, or course. Design Action and Tumi's are both design firms that work with community organizations and in movement building, and Change the Game, they’re a marketing firm that did campaigns like thetruth.com, and they look at how guerilla marketing can be taken to a street level. So the conference is not just for designers, it’s for communicators and people who are in the business of doing marketing and selling the image of the Left to take it to a broader audience and make it more appealing." 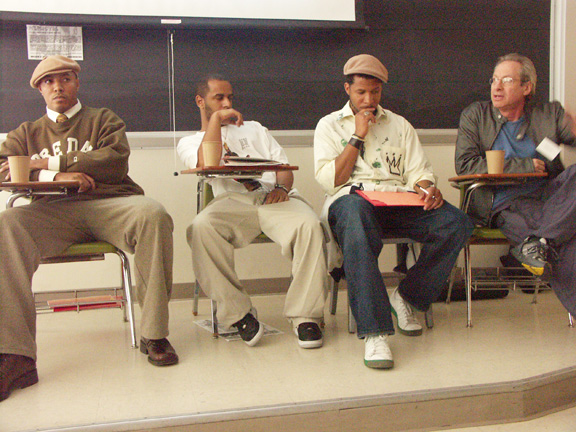 The above photo shows, from left to right: Todd Triplett of Parks-Hall, Kamel Bell of the Malcolm X Grassroots Movement and Change the Game, Kembo Tom of GTM and Robbie Conal, guerilla poster artist.

Kamel Bell talked about taking guerilla marketing and messaging on the road with Dead Prez, a progressive hip-hop group:

"We went from community to community down South, all the way from Miami to Alabama; we hit the Chitlin Circuit. Everywhere we went we went to the local club and the local radio station and to the community lifestyle spots like barbershops, things of that nature. We had lots of posters, we had stickers, we had samples of our music and we’d lay them out, we’d pass them to people, we’d stick them up, we’d post them up every place we’d go. When we’d go to the clubs at night—this is where people would go to have fun, you know, shake their butt or whatever—we’d have the whole club decked out with posters outside. So when people came out they’d go, like, 'Oh, who’s that?' 'Dead Prez!' They can connect that poster or message to what we’re talking about.

"Everywhere we went we attempted to touch down with community organizations and campaigns, anywhere from reparations to police brutality to shutting down your local prison because they’re trying to expand or whatever. We’d touch down with these organizations, not only to get some of their propaganda, but we’d give them some of ours, cross-market so we could build a relationship for the future, really support movements with media and with hip-hop.

"The postering we did is definitely not legal, and, you know, bottom line, if you’re doing anything illegal, you’ve got to keep it on the low. If you get caught you could get in a certain amount of trouble. We didn’t happen to get caught this time. If you do it smartly and strategically you’ll have very minimal problems with the police." 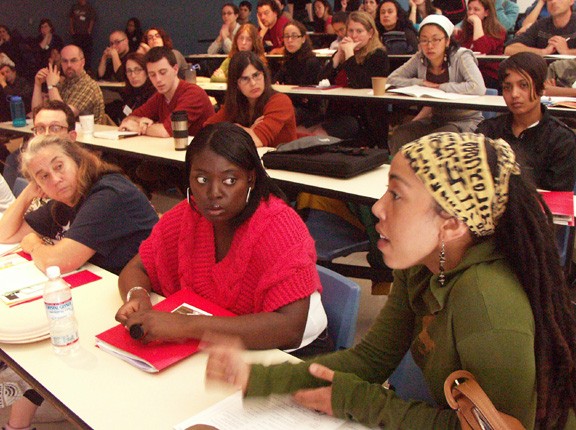 Above, Kihana Ross makes a point in the session on Guerilla Marketing and Messaging as Christi Ketchum looks on.

Todd Triplett runs Parks-Hall, a non-profit that, among other things, publishes Free magazine, which showcases young African-American talent and is distributed free. He caused some controversy when he said working for Coca-Cola could be progressive. He tells the story behind that idea:

"In 1997, essentially after Tupac and the Notorious B.I.G. were killed in the East Coast-West Coast beef, Sprite had come to the ad agency that I worked for and wanted to just create a normal campaign focused on urban youth. My mentor, Reginald Jolly, had come up with an idea: to use the cartoon Voltron as an analogy. It’s an anime cartoon that was popular in the 80s that used five lions who formed one major robot called Voltron. Essentially it’s very popular in hip-hop culture although Coke (which owns Sprite) had no clue about it. It’s referred to often in Wu Tang songs and things like that. We chose to use Voltron as an analogy to say that in hip-hop we can do nothing without being unified. We did five commercials, on about a $15 million budget.

"We chose Fat Joe from the East Coast, Common from the Midwest, Goody Mob from the South, Mack Ten from the West and the old school was represented by Afrika Bambaata and Jazzy J. Now, in each commercial they tried to fight the Robeast, which is the enemy, run by Zarkon, the villain in the commercials. They each tried to fight the Robeast, and they all failed. In the last commercial it all culminated in their forming Voltron, unifying hip-hop essentially, because Zarkon had sent the Robeast to destroy hip-hop. They formed Voltron, defeated the Robeast, and therefore hip-hop, through unity, was safe. And Sprite shot from a number seven market share to a number three.

"It really showed me that you can have a social message, and if properly conveyed, you can take a major brand and you can make that shoot up three or four market shares. Then, what could we do with that same kind of messaging through different avenues that speak more specifically to urban communities and youth?

"Based on the success of the Sprite campaign, I was able to build an ad agency at the age of 21 with 12 employees that I sold at the age of 23 and essentially moved on to start a non-profit. I think that’s the most important thing I have to convey, that it was funded primarily through the money that was made from the success of that commercial, so people say ‘COKE??’ and I say think twice about it—use their money and take their money, they’re not evil people, they just want to make money. Your job is to take the money and use it for progressive social change."

§Big Media or Grassroots Outreach: Which Strategies at What Times?
by Peter Maiden (pmaiden [at] pacbell.net) Tuesday Mar 30th, 2004 7:12 PM 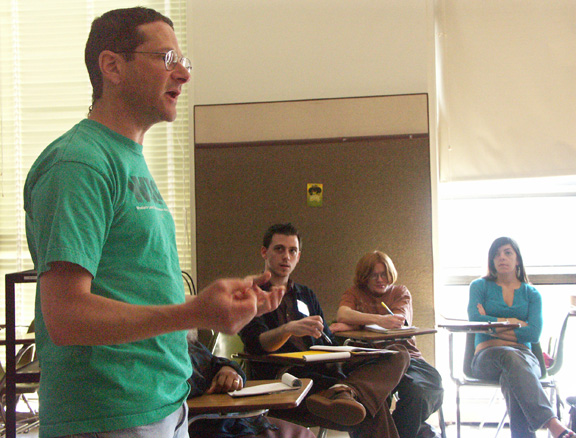 Fred Glass, above, is a labor historian and organizer with the California Federation of Teachers. He spoke about the using the voice of the rank and file in the media during the strike by University of California lecturers, first by outlining the issues of the strike:

"The lecturers in the UC system teach the majority of the undergraduate classes in the system but they don’t get a whole lot of respect from the institution. They average about $29,000 a year these days, since we finally got a contract. Most of them work on the average a 40% load, and even the ones who work full time are getting just over $40,000 a year, which isn’t bad money, but you can’t really be a home owner with that in the Bay Area. These are people who mostly have PhDs, so there was an expectation that they would be landing jobs, decent jobs that would include benefits and longevity. They can’t be part of the community as ‘permatemps,’ which is what the University system turned them into. So the lecturers wanted in their contract two important things besides more money: they wanted to have jobs that would last longer than one-year contracts and they wanted to have a neutral dispute mechanism that wouldn’t end with the University being the ultimate arbiter. That’s what the lecturers went on strike about in the first-ever strike in their history.

"What our strategy was in order to get a sympathetic public hearing was to help the members to stay on message together to all be able to talk from the depth and the well of their own experiences. To be able to convey to the public that they serve the public, they’re on public salaries and they want to do the very best job that they can for the students of California. So ultimately we got the attention of the public, we go the attention of the legislature. We had press events all around the state, our members went on the picket line, and they were quite articulate in getting their message across. And I think that one of the reasons UC finally capitulated and gave us higher salaries, gave some permanency in employment and gave us neutral dispute resolution was precisely because we did a decent job of prepping our folks to be the experts that they are. They were our spokespeople.

"The University had one individual for the most part who was their spokesperson, this guy in the office of the President, and they hid behind him. That’s not at all as effective a way of dealing with things as to have your own people up front talking to people. They have a whole lot more legitimacy than professional PR flacks."

§What's so artsy about this one?
by Media Fan
Wednesday Mar 31st, 2004 12:25 AM
I was wondering, why dont you guys have a media page for things like this? It seems like a lot of these kinds of reports go on the indymedia page. if this one is just on the arts page, a lot of people who might be interested arent going to see it.
Add a Comment
Support Independent Media
We are 100% volunteer and depend on your participation to sustain our efforts!