Add an Event
Newswire
Calendar
Features
Home
Donate
From the Open-Publishing Calendar
From the Open-Publishing Newswire
Indybay Feature
Publish to Newswire
Add an Event
Related Categories: San Francisco | Anti-War | Police State & Prisons
Pictures Of Arrests Of Journalist And Anti-War Protesters Near Jones and Market On M20
by Z
Tuesday Mar 23rd, 2004 6:35 PM
In the late afternoon on March 20th 2004, a small group of antiwar protesters was trapped by police on the sidewalk near Ellis and Jones. Eventually the police let the protesters leave and they moved up Jones St. towards Market St. Right before the crowd reached Market, an unattended police motorcycle fell over and the police rushed the front of the crowd. One bystander was severely beaten by the police and had his arm broken, three others were arrested. One of those arrested was an Indybay videographer who was filming the arrests. The videographer had his camera and a bone in his hand broken when the police attacked. The man who was severely beaten had to be taken away in a paramedic vehicle due to his injuries. 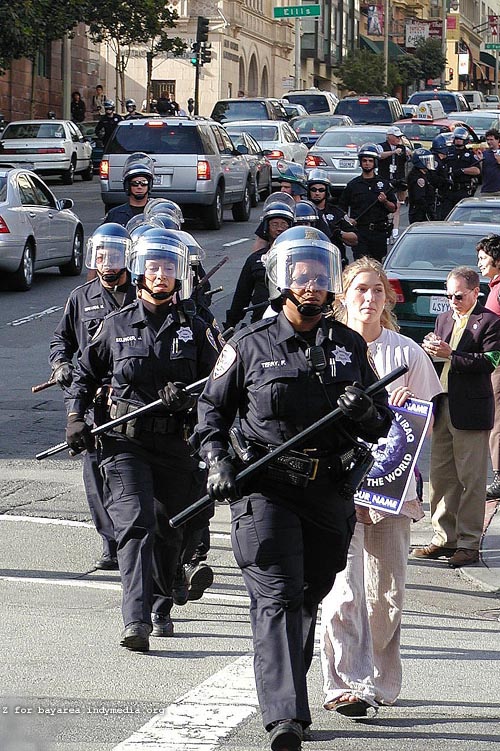 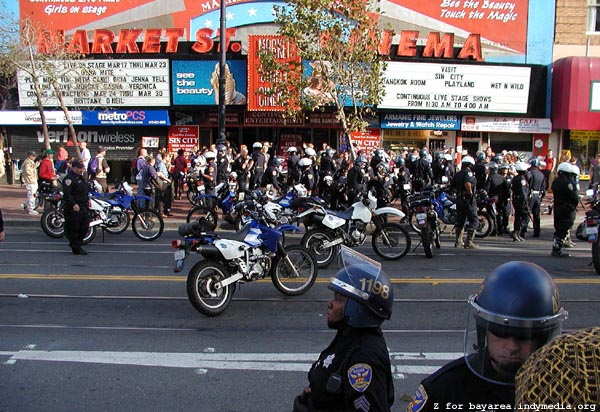 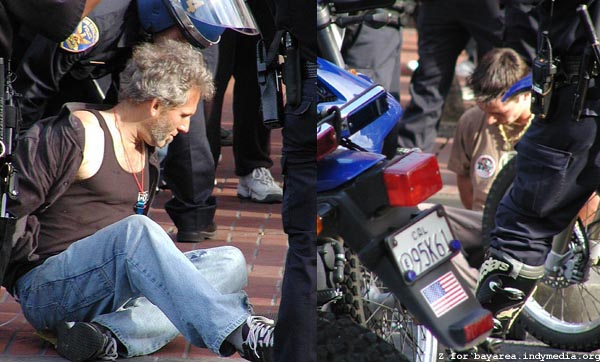 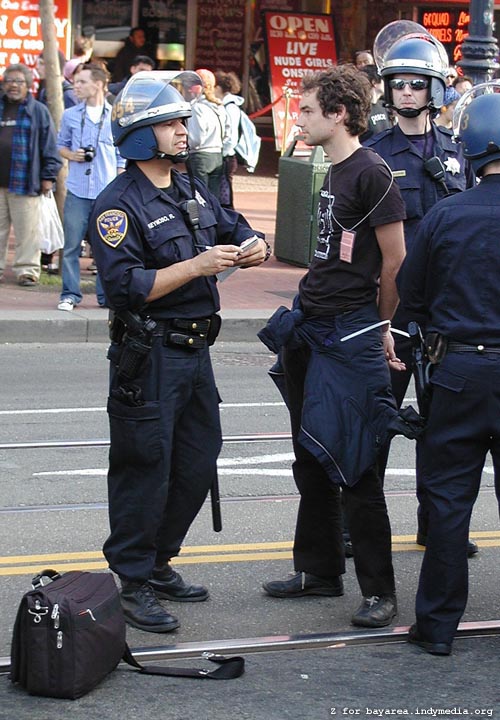 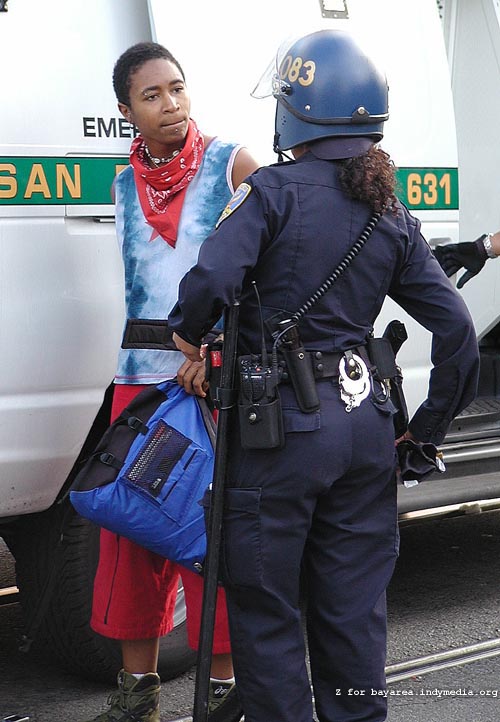 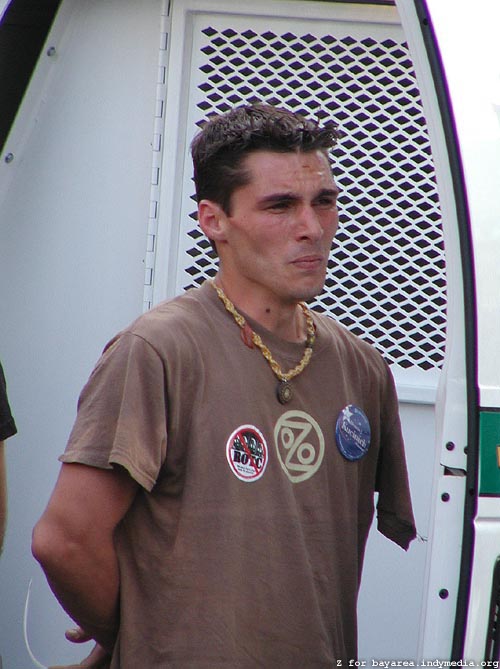 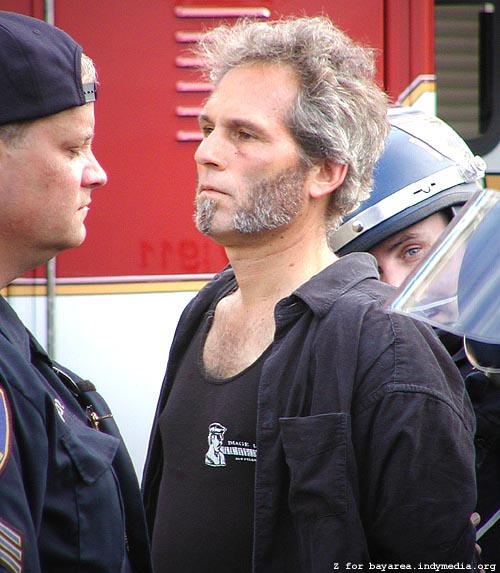 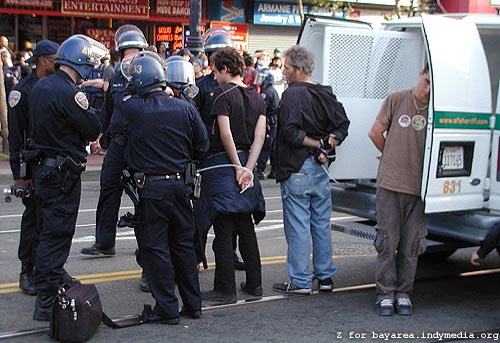 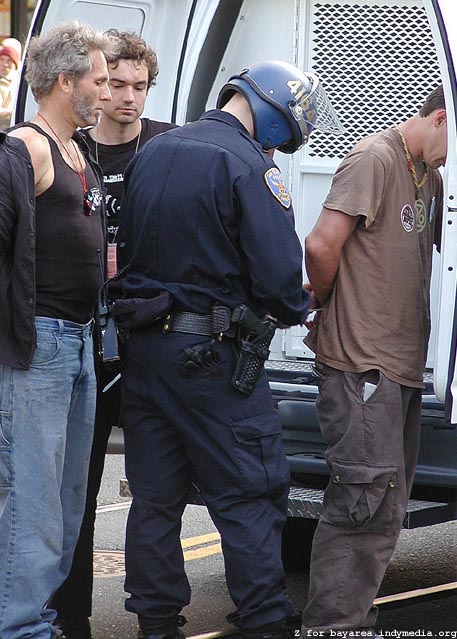 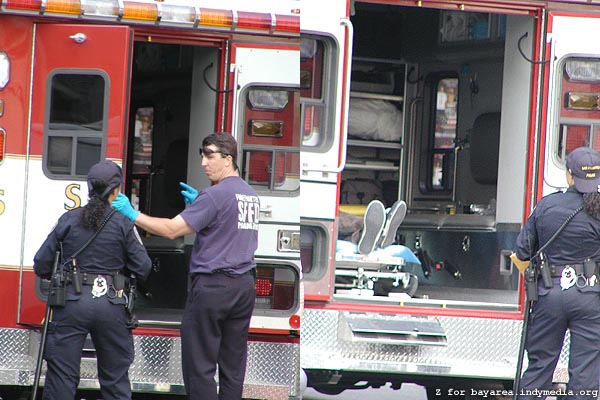 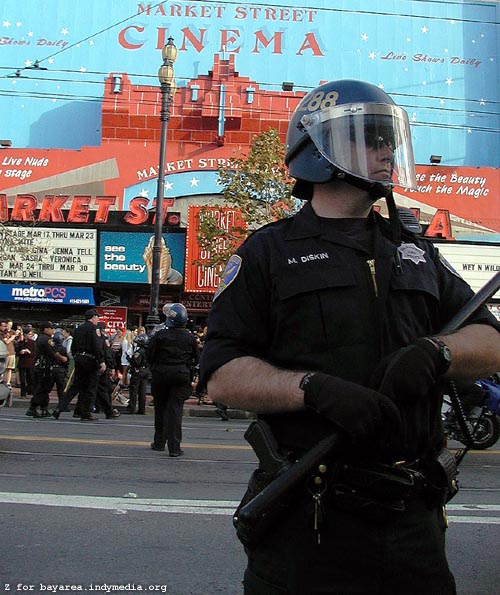 §fascist porno
by nixter
Tuesday Mar 23rd, 2004 11:43 PM
SFPD... see the beauty.. touch the magic...
Add a Comment
§this guy is hot
by ice9
Thursday Mar 25th, 2004 1:44 AM
i just have to give it up to this guy; hope the arms ok
Add a Comment
§my son
by his mom
(tattoozi [at] hotmail.com) Monday Mar 29th, 2004 11:12 AM
there are allways consequenses to every action, but NEVER a need for POLICE BRUTALITY, this makes me sick and sad, more so because this is my son. i am PROUD of him and all those who have conviction to stand up for what is right.
Add a Comment
§read me
by zach
Monday Mar 29th, 2004 11:32 PM
this is my brother noah, while he yelled that he needs medical attention the cops laugh. his arm is now broken, swollen and in pain a week later. thanks to all the evidence gathered on indybay the cops wont be laughing long
Add a Comment
§unreality
by cp
Wednesday Mar 31st, 2004 8:57 AM
My friend said that she saw the part of the breakaway march
where the encircled people tried to run away from the police. Then she and her friend went into a
restaurant by there, as the police were arresting the people and there was
a crowd. They watched a black bloc dressed guy who seemed to be having a
calm conversation with a police officer, and they both had arms folded and
seemed to be not angry. Then suddenly the officer got angry and started grabbing
the blocquer by the shoulders and neck and shoving and fighting, and then he got out
his taser gun or stun gun and gave him a shock. Then the guy started
to cry, and a female friend came over and comforted him. Then after this, they started
the casual conversation again with the police and seemed to be calm as though
they were talking about the Giants.
Add a Comment
Support Independent Media
We are 100% volunteer and depend on your participation to sustain our efforts!